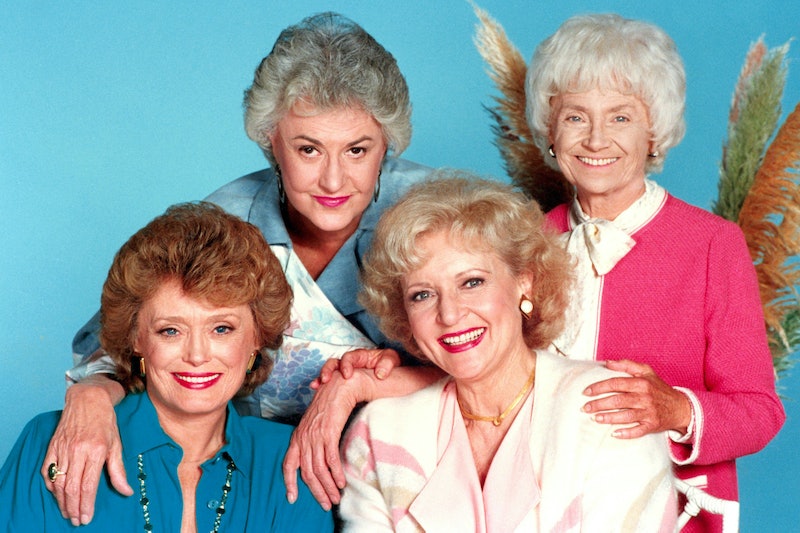 I have long considered myself to be an old soul. When I was in elementary school, the kids in my grade were busy watching Rugrats and Rocko’s Modern Life while I tuned in to Taxi and The Mary Tyler Moore Show on Nick at Nite. In primetime, The Golden Girls was my jam. Did I understand the jokes? Not really (and thankfully, since that would not have been appropriate). From that show, I knew that adulthood meant raising a family, outliving your husband(s), and settling down with three other tough broads in a sprawling Miami ranch. What could be a better way to live out your golden years?

The Golden Girls has really transcended generations of viewers. It’s just the sort of show you can watch with whoever is around. Hell, Summer and Anna on The O.C. had their first nice conversation with each other over singing the theme to The Golden Girls. The show repairs friendships, you guys! The Golden Girls is a nice, big bowl of buttery mashed potatoes (or insert your other favorite comfort food here): It’s warm, it’s uplifting, and it always makes you feel better about the state of things. That being said, the show has been a staple in the American canon for almost three decades, but there are plenty of things fans don’t really know about The Golden Girls. Here are a few.

1. Sophia Was A Scaredy

Estelle Getty, who played Sophia on the show, was known particularly for biting one-liners and sarcastic jokes, but getting her to tell those jokes in front of a live studio audience was quite the feat. Getty said she “felt like a phony” in contrast to the other actresses on the show and she would freeze up on camera because she was so nervous to perform.

Bea Arthur knew Rue McClanahan from starring on Maude together, but that didn’t help them when starring on The Golden Girls beside one another. While McClanahan and Betty White were total besties, Arthur didn’t want anything to do with the ladies. McClanahan said in an interview that Arthur “wouldn’t go to lunch [with McClanahan] unless Betty [White] would go with her.” It must be a testament to their acting abilities that everyone thinks they were BFFs.

Rue McClanahan, who played Blanche had a clause written into her contract saying that she could keep anything that Blanche wore on the show. That made for a lot of revealing nightgowns in McClanahan’s closet. When all was said and done, McClanahan took home about 500 outfits from the show.

4. There’s Another Verse To The Beloved Theme

We all know the words: “Thank you for being a friend/Traveled down the road and back again/Your heart is true/You’re a pal and a confidant.” Did you know The Golden Girls’ theme has one more verse? It goes, “I'm not ashamed to say/I hope it always will stay this way/My hat is off, won't you stand up and take a bow/And if you threw a party/Invited everyone you knew/You would see, the biggest gift would be from me/And the card attached would say/Thank you for being a friend."

McClanahan also had two women roommates when she was on the show, but it apparently wasn’t as exciting as the setup on The Golden Girls. There was no middle-of-the-night cheesecake eating for her, just begging her roommates to pay the rent and to loosen up a little.

6. They Were America’s Surrogate (Grand)Moms

McClanahan said in an interview, “We got lots of letters from teenage girls who were unhappy at home and wanted to move in with us. They thought it was real life.” Isn’t that sort of sweet? I would want to live with them, too.

7. Bea Arthur Was A Bad Ass

Born Bernice Frankel, Arthur was one of the first women to sign up for the Women’s Reserves in World War II. She could hunt with a .22 caliber rifle and a bow and arrow, and she drove a truck and served as a typist. Awesome.

Thanks for reading. Your hearts are true, and you're all pals and confidants.