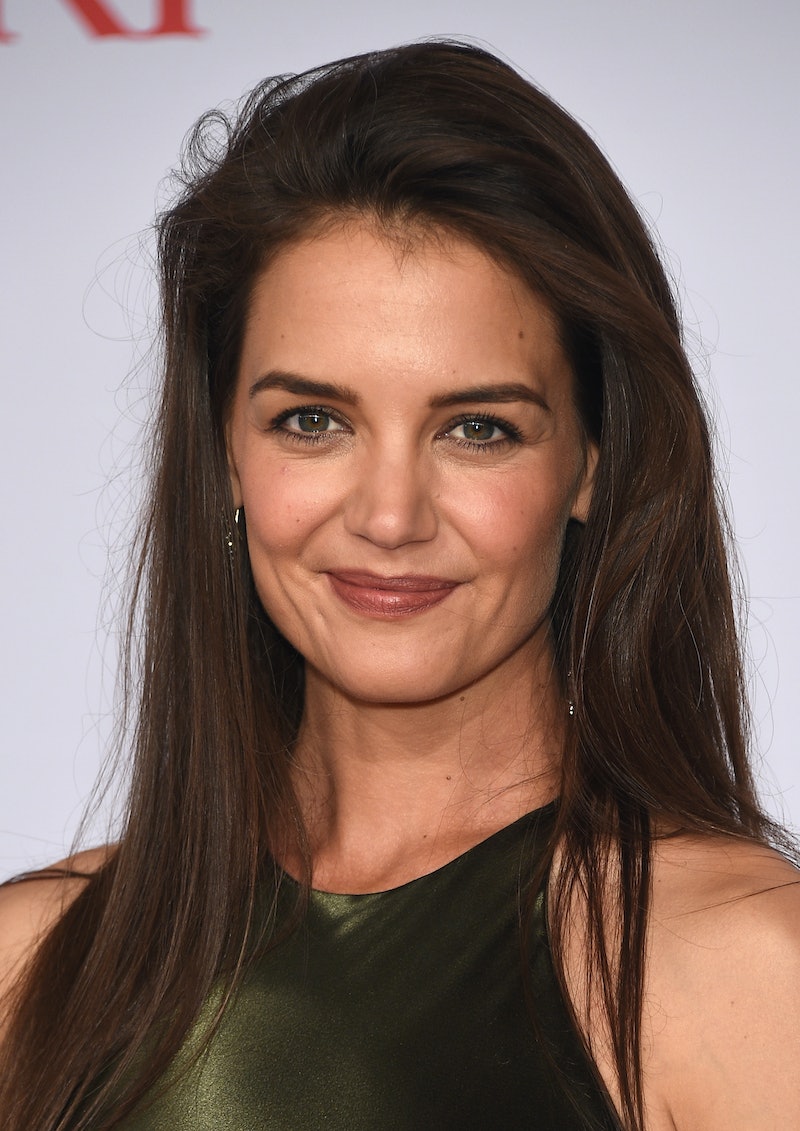 Katie Holmes doesn't want the entire world to know her business — the only problem is that she's pulling the most conspicuous celeb move of all time while maybe sneaking around on dates with her maybe not-so-new boyfriend. Holmes reportedly wears disguises to meet up with Jamie Foxx, whom she has been secretly seeing since October 2013, according to Us Weekly. The 36-year-old mom of one is currently in New York City filming All We Had and has reportedly taken to flying out to Los Angles to meet Foxx, 47, at hotels while wearing wigs and hats. She's also not averse to following Foxx around the country and making 9-year-old Suri do the same, if you believe the rumor.

Foxx is based in Los Angeles. Holmes reportedly had a nanny fly Suri from NYC to California and while Suri hung out at Disneyland with friends (and their parents, I assume), the actress used the opportunity to hang with Foxx at his mansion in Thousand Oaks. To that I say, big whoop! Would it better if Holmes brought Suri over to Foxx's house for sleepovers? Can you imagine how up in arms everyone would be about that? At the very least, young Suri was enjoying herself with buddies while her mom was, again maybe, enjoying a little R&R with a guy she digs.

Now let's get back to the important matter at hand: these so-called disguises she wears.

After rumors surfaced in May that Holmes had told Foxx she loved him and made it clear he was the only man she was dating, her rep reportedly told Perez Hilton there was zero truth to the rumor:

Katie is not dating anyone. She's not gushing about anyone. These stories are untrue. She was on the phone with her daughter when she supposedly was overheard saying, "I love you."

Foxx also dished to Entertainment Tonight that some "knucklehead" started the rumor that he and Holmes were dating when they are, in fact, friends. According to the Ray actor, that infamous photo snapped that shows Holmes and Foxx holding hands was taken while other people, including James Van Der Beek, were hanging out at his house, as well.

If both deny that they are dating, why is the world intent on creating a couple out of them?

In this day and age, it isn't enough to claim a celeb wears a wig when meeting her boyfriend at a hotel, despite the fact that they would save time, energy, and wigs if they just met at one of their multi-million dollar estates. You have to produce proof — the wig on a platter or, at the very least, a photo of Holmes sitting at a hotel bar sporting a black flapper's bob and a fake mole on her cheek while smoking a long cigarette. If their intention is to hide their relationship from everyone (and why, two years in, this would even be necessary is anybody's guess), wearing a disguise is the silliest way not to do it.

No doubt Holmes and Foxx are sharing a friendly bottle of red wine right now, laughing, and reading these funny rumors.