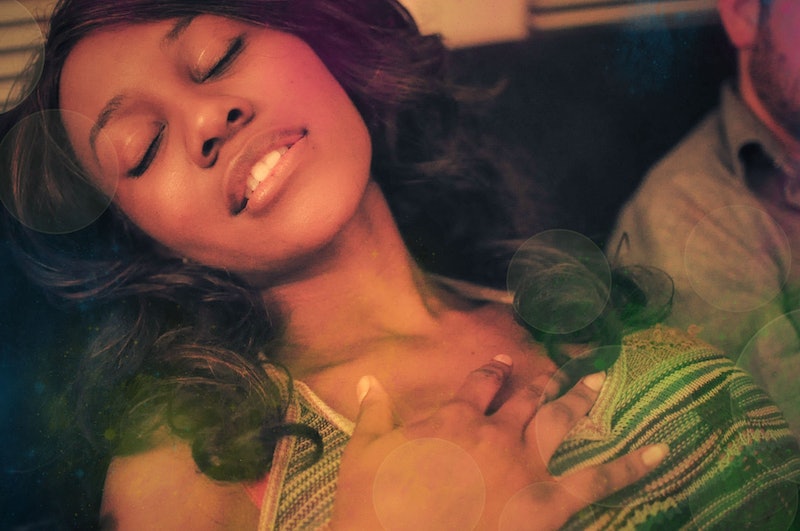 We at Bustle love giving you tips for how to tap into your sexual potential and troubleshoot when things aren’t going your way in the bedroom. But what about finding solutions to those stressful sexual health situations that inevitably crop up when you’re getting down? Emma Kaywin, a Brooklyn-based sexual health writer and activist, is here to calm your nerves and answer your questions. No gender, sexual orientation, or question is off limits, and all questions remain anonymous. This week’s topic: everything you need to know about the safety and potential benefits of having sex on your period .

Q: I’ve been sexually active for a couple of years now, but I just started seeing someone steadily for the first time. And that means that it’s harder for me to avoid sex during my period. Before I used to just not go on dates for that week. My boyfriend says he doesn’t care, and I guess I believe him, but it just seems so messy and idk, like it might hurt? Is it dangerous? He also says that we don’t need to use condoms then because I can’t get pregnant when I’m bleeding. Is that true?

A: Period sex is a very personal decision — some people feel icky and not sexy when they’re menstruating because they’re literally uncontrollably releasing a bloody fluid from between their legs, while for others this is their favorite time to get down and dirty. It’s totally up to you if you want to have sex during this part of your cycle — but there are some things you should know in order to get the most out of it. Here are seven questions you might have about period sex, answered.

Is It Ever Dangerous To Have Sex On Your Period?

It's not dangerous to get down when you’re on your period. Seriously, it’s fine. In fact, it can be great!

Here are some reasons: It can make your period shorter — stay with me here. Your endometrium is released from your uterus through your uterus contracting (you may know this feeling as cramps). Orgasms also cause your uterus to contract, basically helping along the process of expelling your uterine lining. Research additionally shows that sex can help relieve menstrual cramps, and orgasms release endorphins that can combat any bad moods you may be feeling. Wahoo!

A note: if you’re having sex on your period, you may notice some darker clumps of menstrual fluid coming out. They are generally darker red or brown in color. That’s nothing to be worried about — it’s just blood that’s been in your uterus for a bit, mixed with the cells of your endometrium.

Are There Any Sexual Benefits?

Additionally, your pelvic region is more full at this time in your cycle (literally, of a blood-based substance). This means this area is more engorged, which is what happens during arousal. Basically, your shedding endometrium gives you a head start on getting frisky. Also, menstrual fluid is, well, fluid, which means that when you’re on your period, you have lots of extra natural lubrication.

What If It Hurts?

Sex isn’t supposed to hurt. In fact, its primary purpose is to feel great! However, some people experience pain when they have sex on their period — you’re just so full and crampy and … you know. Positions that result in your cervix getting touched (or thrusted against) may be uncomfortable or even painful for some people, since this area is more open at this time. Sometimes getting touched in the cervix, which can happen during deep penetrative sex (with a penis, a sex toy, or a finger) triggers cramps, which aren’t dangerous but can definitely kill the moment. If this happens to you, try positions that are less deep, so that your cervix is left alone.

If you are experiencing consistent pain during sex at any time (including when you’re on your period), there is probably something medical going on. If this sounds like you, go see your doctor.

Can You Get Pregnant On Your Period?

Period blood is not a method of contraception. That’s right, you CAN get pregnant if you have sex on your period. If your cycle is 20 days or longer (which is most people), you aren't fertile when you’re on your period. However, if you have a very short cycle (or an irregular cycle) and you have sex at the tail end of your period, there's a small possibility you can get pregnant. It’s therefore a good idea to continue to use whatever method of birth control you usually use when you’re having period sex.

Are You More Likely To Get An STI On Your Period?

Another important thing to know is that you’re actually slightly more likely to catch a sexually transmitted disease (STD) if you’re having unprotected sex during menstruation. This is because your cervix is more open to let your endometrium out, which has the unintended consequence of potentially letting unwanted things in. So unless you are sure of your partner’s STD status, use a condom during this time to protect yourself.

What About The Mess?

Realtalk, period sex can be a bit messy. There’s no way around it. The good news is that it’s not actually as messy as most people think — during your entire menstrual cycle, you shed between four and twelve teaspoons of fluid total, and that’s over a period of days, not all at once. However, your white sheets will realistically take a beating if you get down on them with nothing else to cover the mess. For that reason, many people take some precautions.

You can lay down a dark towel onto the bed or whatever surface you’re about to get down on (and then I guess do your best to stay on it during the throes of passion). Some people also keep tissues or wet wipes close at hand to clean up after, so you don’t drip. Solutions like menstrual sponges not only can stop up your flow, but also can’t be felt by your partner! Condoms can also be used as a mess reducer, because you can roll them off and throw them away.

Are There Any Optimal Positions For Period Sex?

If you're really worried about the mess, you can select a sexual position that minimizes leakage. The way to do this is to work with gravity, keeping the menstrual fluid from flowing down and out of you, instead staying inside of you (basically, you want your vagina to act as a bowl, which you are not tipping over). For instance, lying on your back or side will definitely result in less of a mess than if you’re on top.

Missionary is the most suggested position during this time of the month, with various other you-on-bottom as close follow-ups, such as legs apart (basically identical to missionary except your legs are apart), spooning, the spider web, and the figure eight (you should click those last two NSFW links because honestly those aren't commonly known names for pretty common positions). Pro-tip: if you usually like using a pillow to prop up your butt or back to get a deeper penetration, swap it out with a rolled up towel — it will give you the same delicious feeling, while saving your pillow from getting potentially covered in menstrual fluid.

One note of caution: if you're already experiencing cramps when you start to have sex, deeper penetration that might result in your cervix getting touched could cause those cramps to become more painful. Basically, whenever you're having sex while also dealing with cramps, it's a good idea to ask your partner to start off slow.

You can of course also go get busy in the shower. You can rinse yourself immediately after, or have the warm water going the whole time! (Unless you live in California or another drought area. In that case, please conserve our limited resources.)

All of this is to say that sex on your period is likely to be fun and feel great — if you’re in the mood, of course. So talk to your partner, grab that old beach towel or slip into the shower, and get to it!