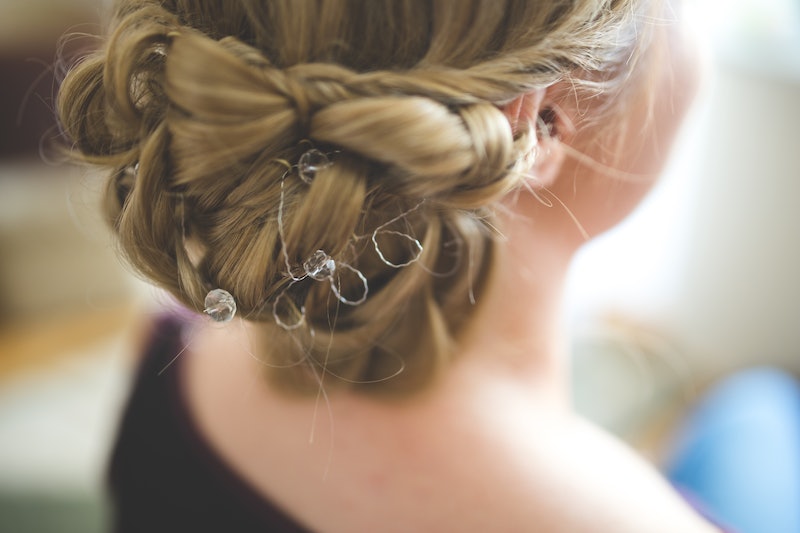 My sister and I are pretty darn close, so without a doubt, we were each other's maid of honor. I took on the role first, in 2009, and she took on the duties when I got married in 2012. And believe you me, there's nothing more stressful than preparing an amazing sister wedding speech. Not only do you have to go up there and speak in front of relatives (many of which you haven't seen in years), but you have to summarize why your sister means so much to you, and why her relationship will last forever. That's a lot of pressure!

My method of handling the toast was actually pretty stupid — I visualized what I'd say in my head before falling asleep the night before. No pen, no paper, just my questionable brain. During the beginning of the reception, I allowed myself just a small sip of booze before I went up, since I didn't want to ramble — but it was nerves, not alcohol, that made me forget absolutely everything I said up there. I spoke, people clapped, and my dad congratulated me on doing a really good job. My family didn't disown me, and nobody accused me of ruining any moments, so I think my non-bombing was totally based on luck.

(That's me, totally winging it.)

My sister, however, planned her toast out like an adult. She took months to prep it, scaring me on occasion with threats of revealing a few embarrassing moments of mine. (Thankfully, she didn't.) And she practiced it, tweaking it to perfection. And what can I say? Besides the aspect of me marrying my best friend that day, my second favorite part of the night was her speech. She did such a good job.

If you're having some difficulty trying to piece together a loving yet entertaining sister speech for a wedding, here are some tips.

1. Try to tackle your stage fright

Public speaking is horrifying for everyone. Even the most charismatic individuals often fear stumbling over words, or awkward pauses. Even if this is your first public speech, pretend it's not — trick yourself into believing that you make speeches like this all the time. This is what you do! This is what you're known for! You are a superstar.

If you're overly nervous about the speech, you won't be able to loosen up and actually have fun at the wedding. Remember the speech for what it is — a nice little gesture that shouldn't last longer than five minutes. That's about how long it takes for your pizza rolls to cool from the oven. It's nothing.

2. Leave any weird grudges at the door

OK, so you always had a sneaking suspicion that your parents liked her more. Her wedding isn't the time to bring that up. Small quips like, "I doubt they'll give me the same budget when my turn comes!" and "Obviously you were Mom's favorite" can come off as sounding bitter. Your speech isn't a chance to air grievances. Even if you and your sister didn't always have the greatest relationship, it's important for you to only highlight the good. She spent a lot of time on planning her wedding, and you don't want to ruin it with negativity.

There are certain stories that might seem hilarious, but truly aren't. Like, remember when your sister and you got super drunk, and told that guy off? Remember when she dated that guy in high school, and it turned out that he was gay? They're memories, but they're likely not related, in any way, to the couple. Saying something like, "let's hope your gaydar isn't broken with this one!" is awkward, and will make his family weirdly uncomfortable.

Likewise, littering your speech with a bunch of private jokes is bound to make the guests tune out. If you feel the need to include them, write them down and give them to your sister personally — it would be a nice wedding memento.

Unless your "remember when" is something super positive or life-changing, it should probably be left out. Stick to the endearing stories that make your sister look like Wonder Woman.

4. Don't forget to include something about the groom

Remember, this is his day too, and the focus is about their union. Hopefully you've gotten to know your brother-in-law pretty well by this point. The speech should definitely include him, and mention why he's an amazing fit with your sister. Again, make sure that there aren't any mention of exes (like, "I like you so much better than Tony!") and avoid anything way too personal (like, "My sister smoked a ton of pot before getting her life together, thanks to you.").

Yeah, that seems like common knowledge, but you'd be surprised. I've seen a ton of inappropriate speeches in my time. And if you don't believe me, just check out YouTube.

5. Truly think about what your sister means to you

The sister relationship is definitely an interesting one. If you're speaking about your older sister, maybe highlight a few positive ways that she helped you grow, and helped set an amazing example for you to follow. If it's a younger sister, mention how proud you are of her amazing accomplishments. Be sincere, and try to hit an emotional level where you've got tears in your eyes, but are nowhere near bawling.

If it's on the Facebook wall of that girl you kind of knew in high school who thinks every quote somehow relates to her, and dances like there's no tomorrow, it shouldn't be in your speech. If you want to use a quote, try quoting something from a favorite song of your sister's. (It'd be wise to run it through Google, to make sure it doesn't have any weird alternate meaning.)

Not only will this totally personalize your speech, but it'll make it a little more special.

If you want to totally wow people, you shouldn't be reading word-for-word from a piece of looseleaf. That doesn't mean that you should memorize your speech, but you should at least look like you have a clue about what you're about to say. If you're the maid of honor, this is your one big thing. If you're doing an open mic speech, a lack of preparedness might look like you had one too many at the open bar.

In fact, a notecard or two that includes things you want to bring up might be a lifesaver, especially if you're the type to get a little emotional.

8. Don't talk about yourself

It's somewhat human to enjoy talking about yourself. That's why the phrase "how is your day?" is a universal ice-breaker during conversations. However, this isn't the time, nor the place. Referencing yourself, how you felt about the wedding, and/or how you hope that you'll one day meet someone as nice as the groom is borderline egotistical.

Trust me, you'll get married someday. And that day, it'll be all about you. But now, it's time to celebrate your amazing sister, and her awesome new husband.

You want to pull an Amy Schumer, and while your family might find it funny, the groom's grandmother was expecting something more Caroline Rhea, and will probably be offended. Try to find something a little more PG. Especially if there are children present.

Yes, the speech is about your sister, but it's really for all of her guests. If you're looking for a short list of topics to cut, here are a few: Sex, body parts, drunken tomfoolery, too-personal events, exes, addictions, and generally anything that the Disney Channel would have to blur out if your speech were to air on their network. Go on, now — you've got this.

More like this
GIRLI & Q Fell In Love At A Skatepark & Never Looked Back
By Jessica Morgan
TikTok’s Viral “Rating Game” Is Exposing Everyone’s Icks
By Courtney Young
Britney Has Been Granted A Restraining Order Against Her Ex-Husband
By Bustle Staff
Are Gemini & Leo Compatible In A Relationship?
By Kristine Fellizar
Get Even More From Bustle — Sign Up For The Newsletter