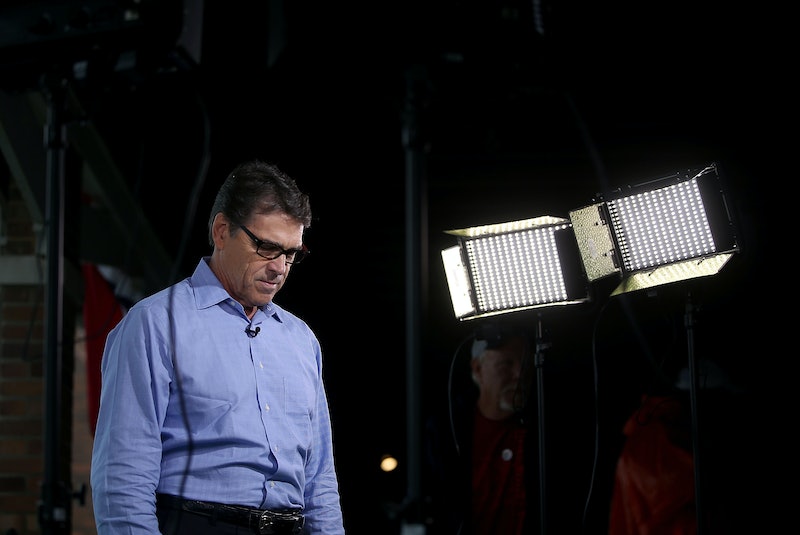 On Friday afternoon, former Gov. Rick Perry will announce he's dropping out of the 2016 presidential race, the Associated Press reported, citing sources familiar with the matter. In a statement emailed out by Perry's campaign to journalists, Perry noted that "some things have become clear." "That is why today I am suspending my campaign for the presidency of the United States," the statement continued. Perry had been rumored to be considering dropping out for some time; on Thursday night, when CNN declared that Perry hadn't met the requisite one percent support to participate in the primetime debate, it may have been the nail in the coffin.

"We have a tremendous field — the best in a generation — so I step aside knowing our party is in good hands," Perry continued. (Presumably, he does not mean Trump's hands.)

Weeks ago, Perry's campaign stopped paying its staff after hitting financial obstacles, and closed down one of its campaign headquarters. Although Perry's initial announcement in June sparked a great deal of fanfare, he soon became lost among his myriad Republican challengers, and his poll numbers have been bitterly low for the last few weeks.

"2016 is the most important election of our lifetime," Perry declared during his dropping-out speech, minutes after his statement was released. "There is nothing wrong with America that can't be fixed. ... Today, I am suspending my campaign for the presidency of the United States," he went on.