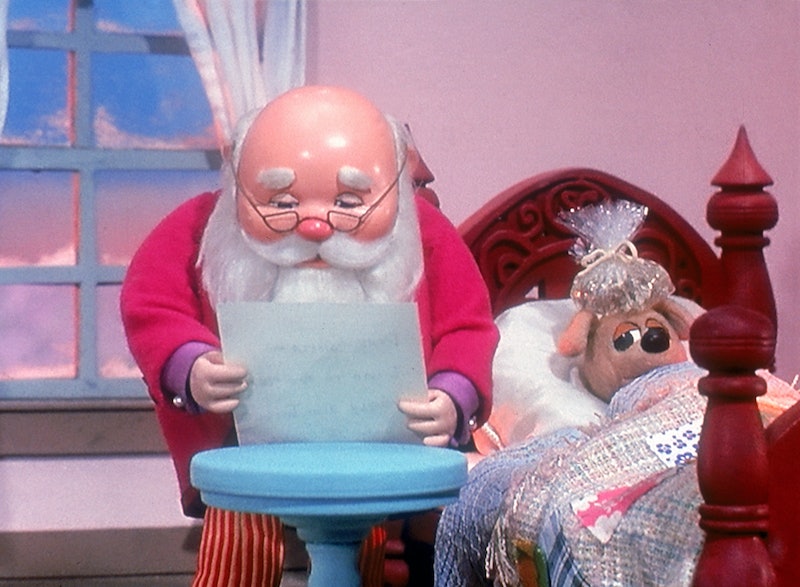 Everyone stop quoting Elf for five minutes and listen up. We have an abundance of Christmas movies to choose from during the holiday season, so it's inevitable that a few are forgotten. But there's one classic tale in particular that's consistently overlooked that deserves its time in the spotlight: The 1974 TV movie The Year Without A Santa Claus.

It will air on Monday night at 7 p.m. as part of ABC Family's 25 Days of Christmas, so — if you're one of the many people who haven't seen it — do yourself a favor and watch it. The whole thing is only 48 minutes long — what else are you doing on a Monday? But for those of you who have seen it and don't like it, let me change your mind. (That is, unless you are a grinch and puncturing your cold, furry green exterior would prove futile.)

Seriously, The Year Without A Santa Claus is an amazing Christmas movie that belongs in the claymation canon where generations past and present can enjoy it. For the unaware, yes, it is claymation and if you're a claymation hater, get over it. (C'mon, these things were made in the '70s, way before Pixar and James Cameron had the power to animate everything down to human eyelashes, for goodness sake). Just revel in its simplicity and let the story distract you from the shaky movements.

The basic plot, without spoiling anything: The movie tells the story of a year when Santa decided to not give out gifts, feeling under the weather and under-appreciated. So, before Christmas passes and it is too late, here are eight reasons why everyone should watch and love The Year Without A Santa Claus.

Right from the opening, you know you're in for a holiday treat: The calendar pages! The animation! And just look at that beautiful North Pole — stuff that kids' dreams are made of. Plus, Shirley Booth as Mrs. Claus and Mickey Rooney as Santa, hello?

We're all used to seeing a laughing, cookie-stuffed, jolly Santa, but think about it: A man who is centuries old has to travel the world in one night to bring little kids everything they want just because they were generally good people? He's bound to be a little cranky, and The Year Without A Santa Claus is the only holiday tale that acknowledges that.

Mrs. Claus Has Something to Do

For once, Mrs. Claus has something to do besides bring Santa hot chocolate. When he decides to take a break, she tries to fill in, and when that doesn't really work, she organizes a master plan to change his mind. Girl power!

This is really the only reason anyone needs to watch The Year Without A Santa Claus. The Miser brothers are easily the best part, thanks to their coordinated theme songs, intense rivalry, and impressive dance moves. GIFs simply aren't enough — you need to see the full musical numbers.

Part of Mrs. Claus' plan involves sending two well-intentioned, but dimwitted, elves on a mission to find kids who still believe in Santa. They end up in Southtown, where Vixen is mistaken for a dog.

Once word gets out that Santa isn't coming, one little girl decides to make him a card (while singing, obviously) about how she'll have a blue Christmas without him. It's pretty heartbreaking, but the scene will have you thinking: Why is her bow so large, and how does her tiny neck support its weight? See, this is why The Year Without Santa Claus is so great. It has us asking the tough questions.

The 'It's A Small World' Montage

At least, that's what I call this sequence, because it features kids dressed up in completely stereotypical outfits from various countries throughout the world. Casual racism aside, the moral is important: Always say thank you to Santa (and those who do nice things for you) — using your words, not cookies. It also helps to send him a few gifts of his own every once in a while.

Is it really a spoiler to say a children's Christmas movie has a happy ending? Just know that it will make you wish Santa Claus Lane was a real place.