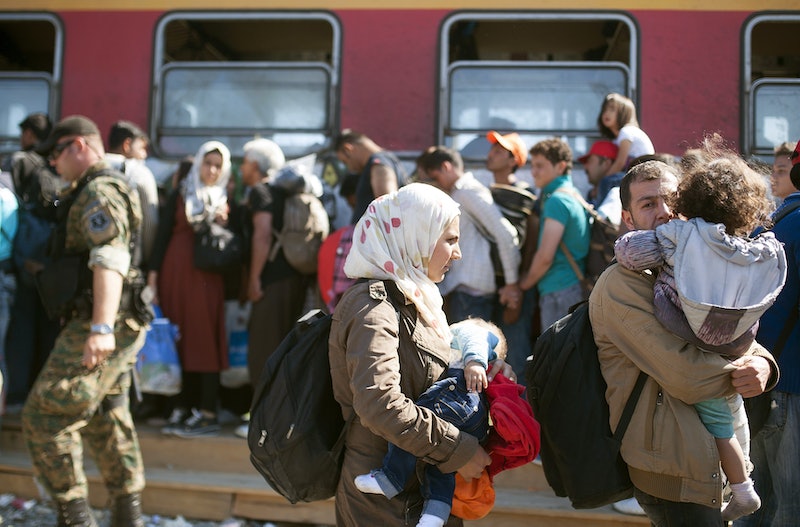 The big show is happening again this Wednesday — it's the Republican presidential debates, back on primetime television! A lot's happened since the last debate in early August, even though the lay of the land looks much the same, with boastful real estate tycoon Donald Trump still polling well ahead of the field. In fact, there's a humanitarian crisis happening in the Middle East that's become dramatically more visible since then: Will the GOP debate mention the refugee crisis?

I know, I know — a Republican Party debate, given some of the dismal positions that's been recently voiced on immigration, might not seem like a ripe place to discuss the displacement of million of Syrians and other refugees. However, by virtue of how and why the crisis has occurred, there's a big possibility you'll be hearing about it come Wednesday night.

Here's the basic idea: For the last four years, Syria has been in the grips of incredible upheaval. What started as a protest movement in 2011, amid all the change of the so-called Arab Spring, soon descended into a brutal civil war. It's been fought between forces loyal to the country's strongman dictator Bashar al-Assad and a slew of anti-Assad fighters, as well as some elements of anti-American terrorist organizations. The extent of the bloodshed (there have been reports of chemical weapons, as well) has led to millions fleeing the nation.

So, how might this intersect with a Republican debate? First of all, it's been absolutely scorching in the news as of late, and all those wagging tongues are as good sign as it gets that the conversation will turn that direction. But more to the point, it actually opens up some obvious lines of attack against President Obama.

Conservative critics have for years decried the Obama administration's refusal of direct military engagement in Syria. In particular, even after the crossing of what Obama once termed a "red line" in the conflict — the reported use of chemical weapons within Syria very nearly led us to war in the region, but as PBS detailed, the plans were abandoned close to the eleventh hour.

In short, if you find it unlikely that a bevy of Republican office seekers are going to talk about opening up the doors to millions of refugees, yeah, that probably won't happen. According to Vox, the U.S. has only accepted a scant 1,500 or so refugees so far, with Obama pledging Friday to raise that number to 10,000. Considering the number of Syrians estimated to be fleeing their country is around 4 million, that leaves out an approximate 99.9975 percent of the refugee population.

Basically, this gives the GOP an easy opportunity to take some pot-shots at Obama and his foreign policy record, without necessarily having to dwell on the counterfactuals. Would a bombing campaign have actually helped ease the bloodshed in Syria? It's impossible to say, even with benefit of hindsight — U.S. military operations in the Middle East sometimes have a way of fueling further unpredictable, violent hostilities, as seen with ISIS in post-war Iraq.

But one thing is certain — as far as the Syrian crisis can be used to diminish President Obama's record on international affairs, it will be. In other words, you'll probably hear some of the Republican presidential candidates talk about the crisis on Wednesday night, but it'll probably be less about solutions and more about recriminations.

More like this
Boris Johnson’s Leadership Is In Question – Again
By Bustle UK
5 Ways To Stand In Solidarity With Women In America From The UK
By Sophie McEvoy
How To Fight For Reproductive Rights, Based On How Much Time You Have
By Courtney Young
Supreme Court Overturns Roe v. Wade
By Melanie Mignucci
Get Even More From Bustle — Sign Up For The Newsletter