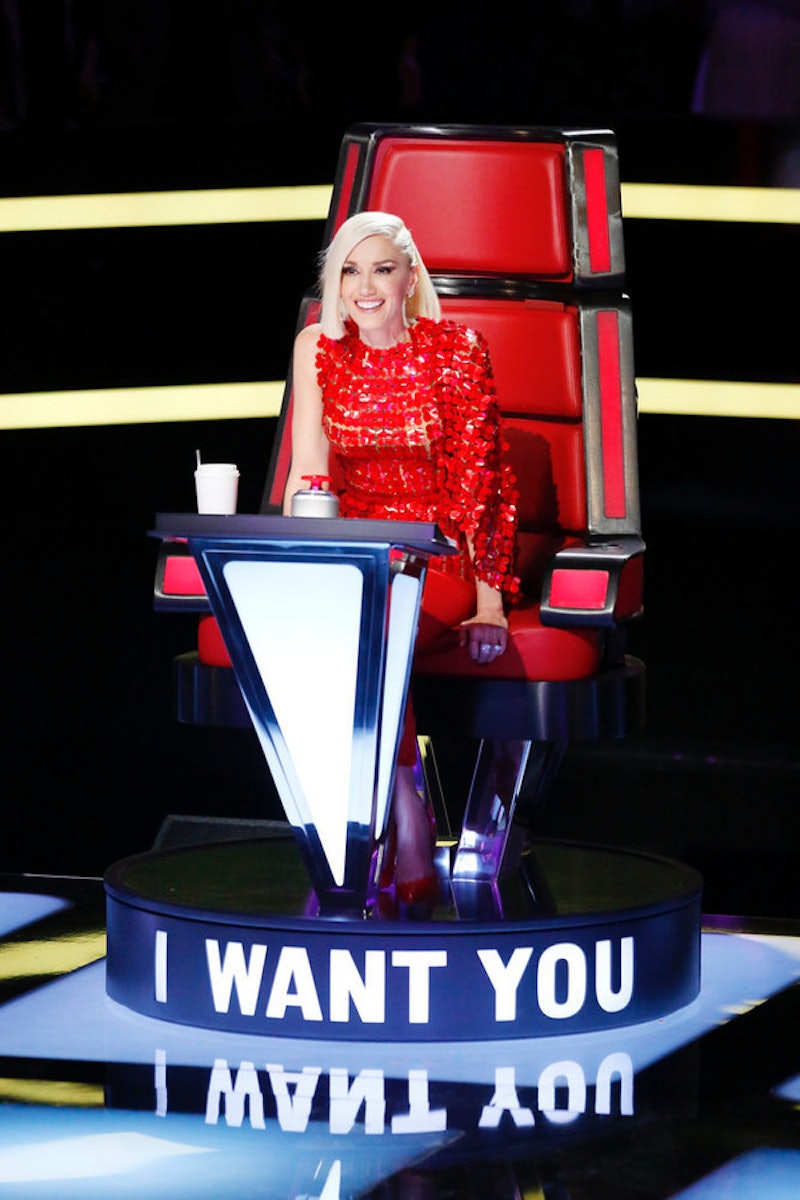 When it premieres on Monday night, Gwen Stefani returns to the coach's chair for The Voice Season 9, and she could not be more excited. The No Doubt singer will be covering for Christina Aguilera while she takes a break. But alas, Gwen Stefani is still the only female coach on The Voice — and she's mostly OK with that. She says she's happy to sit alongside regular coaches Pharrell Williams, Adam Levine, and Blake Shelton in the big red chairs. "I don't really think about being the only girl," she tells reporters at The Voice press junket. "It's the story of my life. It's so weird, because I wasn't like a tomboy — I was a totally into Barbies and I had my girlfriends. All of a sudden, I was in a band with all guys and it stayed like that."

This will be Stefani's second season as a coach on The Voice — her first go-around as a coach was during Season 7 last fall and she served as an adviser during Season 8. Stefani sys she was thrilled to come back to the show as a coach this fall. "[Season 7] went really fast, but it was so fun and not at all what I expected and I got so much out of it," Stefani says. "I was hoping they'd ask me back. I was waiting and waiting and waiting — and it happened kinda last minute, so it's been like a whirlwind. But, it's been so great and so different this time, because I know everyone so well and I know what I'm doing."

Stefani also reveals a bit more of what it's like to be in her spot on the show, and what she's looking forward to in Season 9.

Benefits Of Being The Only Female

One of Stefani's favorite parts about being a lady in the coaches' chair is that she gets to dress up. "I love being a girl on the show because I get to wear fun things and change it up," she reveals. "I have to work a little harder than they do, to be honest. I think I'm here two hours before everyone else to make it happen."

Potential Drawbacks Of Being The Only Female

But, there were also moments when Stefani says she felt like being the only lady coach worked against her when it came to the blind auditions. She admits she felt that female singers seemed more willing to pick one of the male coaches to lead them through the competition.

"I felt like I wasn't getting picked because I was the only girl a few times," Stefani says. "Girls are so dumb sometimes at that age — I know, because I was there. But, I know exactly what to do — I'm you! — and I've been through it already. It was weird, because I had not had that feeling in a long time — not having an equal playing field, because of my gender. I don't know how real that is."

Levine, who was sitting next to Stefani, chimes in: "There are a lot of other factors, too. Blake and I have been doing this for a bazillion years."

She nods. "That's true," Stefani says. "But some of the young girls, at the end of the day, I know I could help them so much."

Stefani expressed a lot excitement about her new crop of singers. She says she loves their background stories, as well as their immense talent. She can't say more than that, but viewers will get to know the new Team Gwen this season. "My team is just amazing, emotionally," she tells reporters.

The "Good For You" singer will be working with Stefani and her team throughout Season 9. Gomez grew up in the spotlight, getting her start as an actress on Barney & Friends (yup, the purple dinosaur) and the Disney Channel TV show Wizards Of Waverly Place. “It’s just incredible to me to think of somebody that’s been doing it since they were a child," Stefani told Access Hollywood in an interview about Gomez. "The dedication and the years that she’s put in, and to [not] only be so young, but have so much experience, is kind of incredible.”

Fans can look forward to all this and more when the show starts on Monday night!