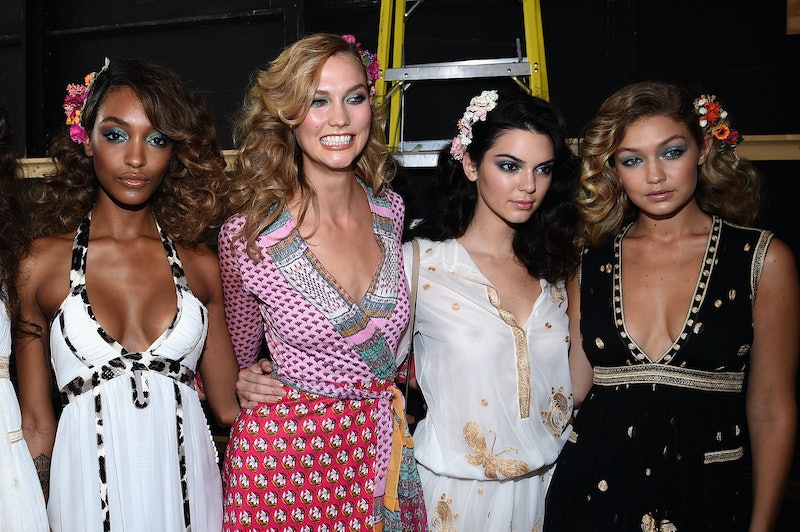 All hail the queen of the wrap dress and, really, all things beautiful, fresh, and fiercely feminine. I'm obviously talking Diane Von Furstenberg at New York Fashion Week, where the designer owned the runway from opening strut to finale dance. This proclamation may seem a bit premature, considering the fourth day of NYFW just came to a close, but DVF's show is not an act any designer should wish to follow. With a lineup littered with "It girls" and a collection that is surely making the world over curse the arrival of fall, it is almost inhumane that the Fashion Week gods are forcing anyone to follow in her footsteps. There may be miles of runway left to be walked, but the house of Von Furstenberg has spoken loudly, dropping the proverbial mic.

Leaving no famed stone unturned, the casting team at DVF curated what is sure to be the most star-studded runway this side of a Taylor Swift concert. From open to close, the biggest names in fashion and pop culture took their turn on the catwalk to showcase the Spring/Summer 2016 collection. Collegian Karlie Kloss, breaking momentarily from her Ivy league studies, opened the show (because, you know, when Diane Von Furstenberg calls, the coding can wait) in an iconic wrap dress of perfectly mixed patterns and proportions that begs to be taken on a Hawaiian holiday.

While Kloss was dream-worthy, the trail of models behind her weren't half bad, either. And by half bad I mean mostly members of every "who's who" list in town, all dressed in designs as delightful as that epic opening frock.

Kendall Jenner glided past the high profile front row, looking like a gilded princess with an effortless air of confidence, while Jourdan Dunn stunned in a beautifully layered white maxi with a leopard trim that brought sass to the tropics.

Neither the collection's depth nor its glittering roster stop there, though. The Hadid sisters, fashion's latest dynamic duo, appeared in dresses of matching lengths, but with unique takes on the ever-present theme.

Gigi's bringing a bit of New York City glamour and sophistication to a collection otherwise entrenched in the tropics and Bella is rocking a bit of that boho flair. Both, most obviously, are bringing down the house.

Lily Aldridge also gave new meaning to the words "angel in a plunging midi that longs to plucked from the runway for brunch on the beach."

Like everything else that was neatly packed into seven minutes or less, the beauty look at DVF was an out of this world mash-up of island life and city sophistication. The dual-colored, jewel-toned, blue-green lids channeled modern mermaids, popping against fresh, sun-kissed faces and nude lips, while flowing beach waves were adorned with floral hair accessories reminiscent of DVF's '70s preferences.

Beginning to end, DVF's spring/summer 2016 collection managed to be the most expert mash-up of tropical dreams and sophistication with bursts of sexy sass and underlying bohemian vibes — the love child of a modern New Yorker and a Polynesian prince, if you will.

Everything, from the dream team model lineup that is the new standard for fashion squad goals to the perfectly designed frocks with a fresh vibe to the beauty look that will have the world reconsidering blue eyeshadow, stole the NYFW show. Basically, Diane Von Furstenberg just proved, once again, that she is queen of everything.

More like this
Twitter Can’t Get Enough Of Lewis Capaldi Creating Fashion Looks For ASOS
By El Hunt
Rita Ora’s Sheer Dress & Mermaid-Inspired Prosthetics Stun At British Fashion Awards
By Sophie McEvoy
Behold: The Wildest Fashion Moments of 2022
By Dominique Norman
Florence Pugh Wore A Spicy Backless Gown To The British Fashion Awards
By Allie Fasanella
Get Even More From Bustle — Sign Up For The Newsletter