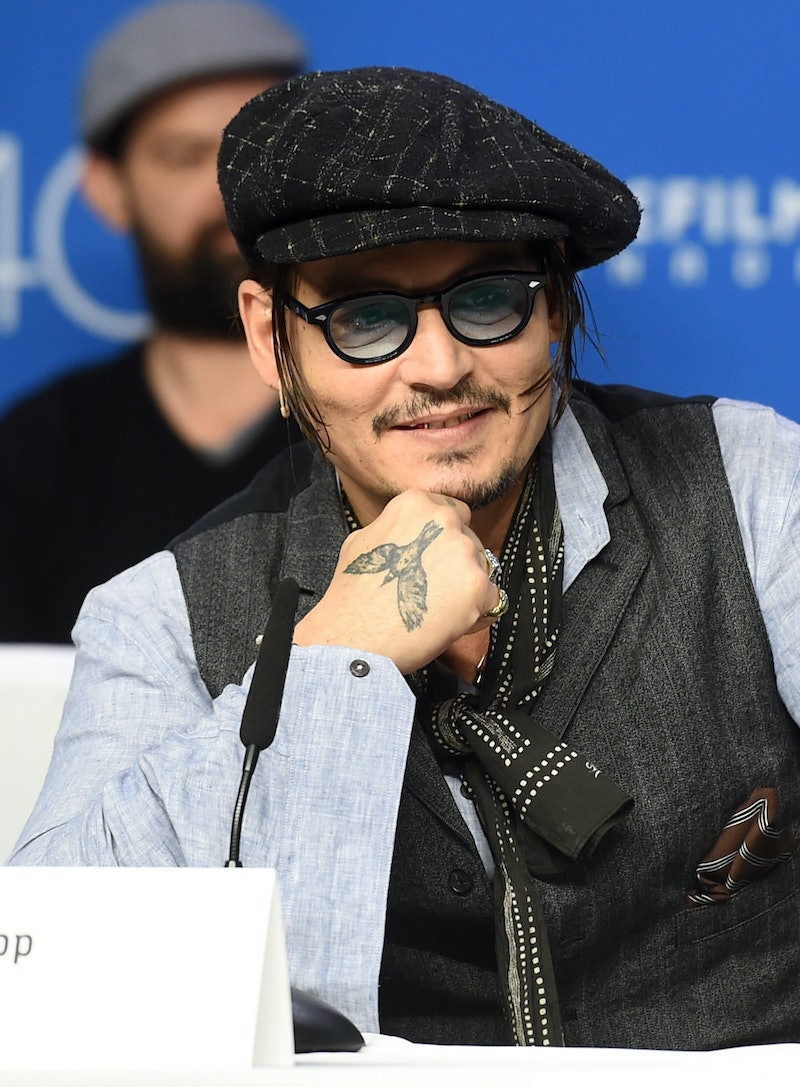 He's an actor who's portrayed a man with scissors for hands, a memorable resident of Wonderland, an eyeliner-wearing pirate, and a bevy of other fictional and whimsical characters. But in Black Mass , Johnny Depp takes on real life gangster James Bulger — also known as Whitey or Jimmy Bulger — a criminal who was responsible for more than a few murders, and one who eluded law enforcement for decades. The grim role is a departure from his usual wackiness, and when asked what the difference between playing fictional and real characters is, Depp jokes: "You mean the Mad Hatter never existed? Or Willy Wonka? Are you gonna tell me there’s no Santa Clause? What about the Easter Bunny, seriously?"

"When you’re playing a fictional character you can stretch it out into all kinds of strange places. I’ve taken a lot of heat for it. When you play someone who exists or existed, there’s a tremendous amount of responsibility. No matter who they are, whether they’re deemed good or bad you have a responsibility to that person because it’s their life," he says. "Also a responsibility to history and truth, that was very important. To be as accurate, in regards to the look, was extremely important to me."

Director Scott Cooper tells a story of when James Bulger's attorney came to set. He explains that the lawyer watched filming for a few hours, and sat shaking his head. Cooper approached him and asked what they had done wrong in their portrayal. But the lawyer responded to say that watching Depp was like watching Bulger's ghost on set. The resemblance, the voice, and even the way he walked was captured so accurately by Depp, Bulger's attorney was floored.

The Pirates of the Caribbean actor describes his performance as Bulger, which is based off the book Whitey, by Dick Lehr and Gerard O'Neill, as "predatory." He speaks of the infamous gangster's mannerisms: "[He tried] to sear his way through a person with his eyes. To get inside their brain. To control them in a way. As far as obsessive cleanliness, he was very much like that."

When we are introduced to Bulger on screen, he is sitting in a bar, watching in disgust as a fellow gangster dips his fingers into a peanut bowl before licking them gratuitously. "It’s such a nice detail, especially for a guy who is in the world of extreme, graphic violence. I loved the dichotomy of that obsessive compulsiveness," he says of the scene, adding: "Had that guy continued, he probably would have blown his brains out. I would have too. Never eat peanuts at a bar, just telling you. There’ve been studies."

Depp was familiar with the almost legendary story of Bulger when he signed on to the role, but he never got a chance to meet the criminal. "The story of Jimmy Bulger is fascinating in itself, and you start reading the books and there are various angles. Everyone has their own take of what went down exactly. The first thing I did was I contacted Bulger’s lawyer to request the opportunity to meet Jimmy Bulger," he explains. "A week after I made the request I got a message that said ‘Jimmy respectfully declines, as he is not a fan of the book.'"

But even without meeting the man, as any real life person, Depp knew that Bulger is a multifaceted being, and his life as a criminal only makes up part of his character. "My intention was not to go out and create someone who is evil," the 52-year-old actor says. "I don’t think any of us wake up in the morning and shave and brush our teeth and go, ‘I’m so evil. Im so horrible!’ I approached Bulger as a human being who was multifaceted. [He] did have a side to him that was human, loving, all that. Then he had his business. There are certain businesses out there that the language of that work is violence."