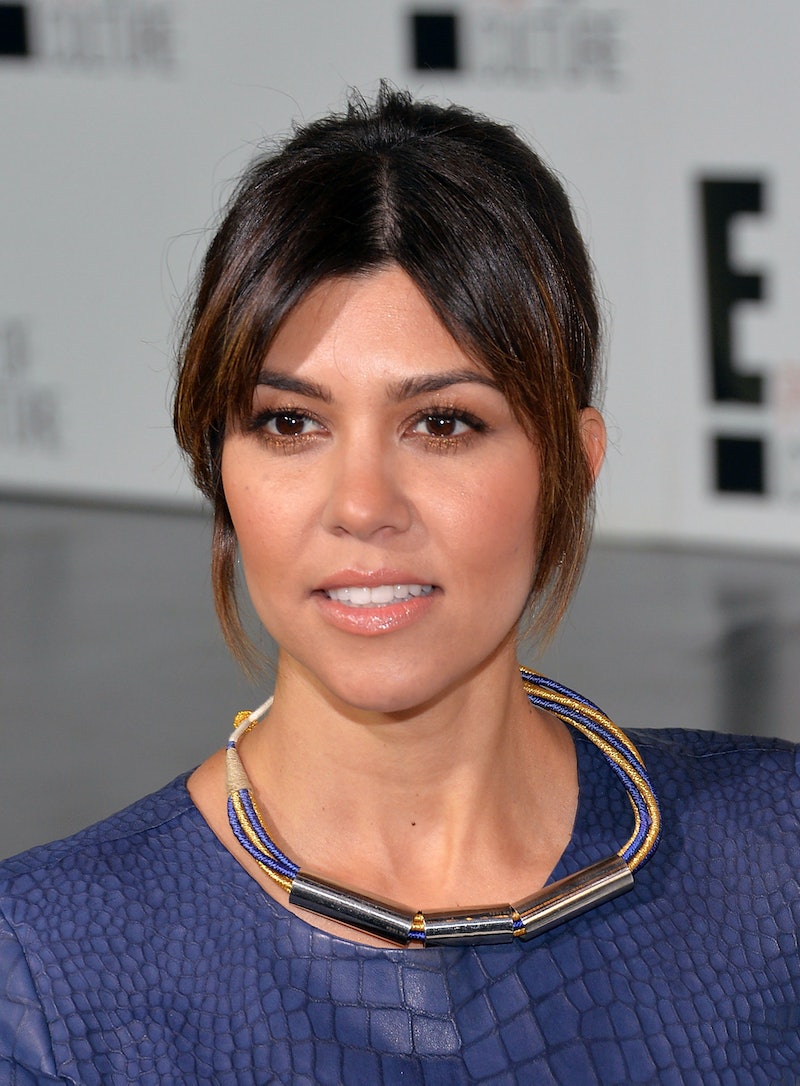 This Kardashian is one tough mother so you'd better cut the shit. Seriously, you should probably just back away from Kourtney Kardashian and stay there — especially when it comes to her kids. Keeping Up With The Kardashians star Khloe Kardashian reamed into a pushy group of paparazzi over the weekend for cornering her and her daughter Penelope while on a shopping trip. And today — following her sister Kim Kardashian's epic response to her internet haters accusing her of waxing baby North West's eyebrows — Kourtney's rep released a statement responding to rumors that the reality star and longtime boyfriend/baby daddy, Scott Disick, have split and he's living in a hotel. It looks like Khloe's divorce went way too smoothly to keep the tabloids satisfied — but props to Kourtney for setting that record straight.

I know what you're going to say, the Kardashians did everything in their power to reach this level of fame so they're getting what they deserve and we should absolutely not be defending them. And you might be right. You could also ask: Why now? Why defend any of the Kardashians of now after all of this time and the plethora of false stories about them? Well, here's a reason — it's kind of pathetic and another reason to pay attention is because Kourtney is proving that she's a bad ass parent.

Celebrities with children versus paparazzi is a tale as old as time that's gotten a lot of attention recently thanks to Alec Baldwin, Halle Berry, and Jennifer Garner. The video of Kourtney lashing out at the insensitive and obviously aggressive photographers following her and her child also isn't the first to ever grace the internet but we can't say that we don't support her in her reaction to them. They're dangerously close (so close that even I squirmed a little just watching the video) and even though we know for sure that they won't learn from her pointing an admonishing finger at them and screaming at them to, "Shut the fuck up," I can honestly say that I'm impressed with her. You don't have to be a victim if you don't want to be — so good for her showing her daughter at a young age that no one expects her to curl up in fear at the sound of a flash going off.

In terms of rumors — the Kardashian/Jenner family have basically kept tabloids in business over the past seven years this is not the first time a member of the family has gone public with a statement that debunks a tabloid rumor. I know that, I promise. But this is honestly pathetic. Khloe's divorce made headlines this week just because it happened and for lack of any dramatic behavior that occurred during the proceedings (probably because most of that happened when Lamar Odom "went missing" earlier this fall) the lens got turned on Kourtney and Scott. Why? Personally, I feel like those two do absolutely nothing worth writing about. We already know that they fight — we've watched them fight through eight seasons of KUWTK and those other Kardashian spin-off series — it's just old news and it's even older news when it's not even true!

Kourtney's rep confirmed to E! News that the rumors that Scott had moved out of the family home and checked into the Montage Beverly Hills Hotel were completely false and that the two were not having any relationship trouble. We believe you, Kourt. The two have been out together and the only drama I can see is what Scott probably said when Kourtney decided to leave the house in UGG slippers. Why do we always want the Kardashians to be experiencing some kind of drama? I know they're simultaneously the most loved and hated family but we need to back off. At least from Kourtney — unless we want her to poke our eyes out and verbally attack us because she's always been the family wildcard that never apologizes. She could kick some serious ass and she's got no problem telling you to "shut the fuck up" because she's protecting her family.