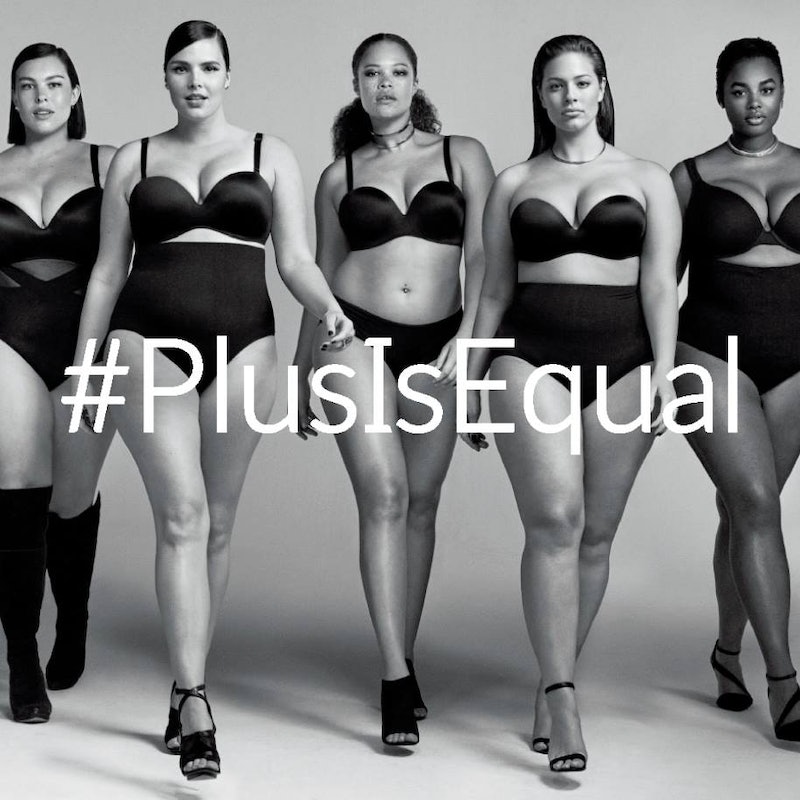 On Aug. 26, Lane Bryant first hinted at its new #PlusIsEqual ad campaign, which put the silhouettes of six plus size models — Candice Huffine, Ashley Graham, Precious Victoria Lee, Georgia Pratt, Justine Legault, and Sabina Karlsson — on the pages of the September issue of Vogue. By Sept. 8, Lane Bryant launched the full campaign on its social media platforms. According to a public statement from the brand, the ad will also run in Glamour and be featured on the Emmy's.

Although Lane Bryant has not returned Bustle's request for comment, the company's CEO and president Linda Heasley said in a public statement, "Though 67 percent of women range in size 14-24, the media still fails to represent them. The inequality exists and we're continuing to balance the equation. Plus is equal. Our women are not only equal, they are sexy and fabulous!"

In addition to the ad campaign, Lane Bryant hosted a Times Square Takeover on Sept. 14, inviting New Yorkers and women around the world to virtually tune in. While many in the plus size fashion community were quick to show support, some fat activists took issue with the campaign's seeming lack of diversity and representation, which wasn't in keeping with the brand's full size range that extends to a size 28.

Much like the discussion sparked by Lane Bryant's last campaign, #ImNoAngel, the ad has seen total support from some, and sparked valuable, critical dialogue from others. Here are the 15 most memorable reactions thus far.

Once the campaign was released, I saw reactions across Facebook that cried out for more body diversity. Plus Model Magazine 's Editor in Chief Madeline Figueroa Jones took to the publication's Facebook page to share a mini rant. She pointed out that when Eloquii created an extended size lookbook for sizes 26 and above, it received very little attention, and that if consumers want to see more size diversity, they have to celebrate it when it's done and not just complain when it's not.

The #PlusIsEqual hashtag shows that the Times Square takeover had no shortage of support.

Attendees at the event gushed over seeing one of the campaign models, Ashley Graham, share her story of breaking industry beauty standards.

5. But "Equal" Didn't Feel Equal To Everyone

Some fat activists not in attendance, such as indie plus designer Shawna of Chubby Carthweels, reacted and questioned the lack of size diversity in the campaign.

I saw many positive reactions to the full figured dance group Pretty Big Movement taking the stage at the event. I was personally happy to see an entire group of women of color being celebrated in this way.

7. Wendy Williams And Brad Goreski Were On Hand

TV personality Wendy Williams and stylist Brad Goreski were both in attendance and on stage at Lane Bryant's Time Square Takeover. Williams wore a Lane Bryant cape and Goreski discussed using personal style to express oneself.

Twitter was quick to point out the contradiction of Wendy Williams as one of the #PlusIsEqual spokeswomen. That morning on a video interview with People NOW, Williams came out in support of Nicole Arbour's "Dear Fat People" video saying, "A lot of what that fat shamer had to say is absolutely correct, it's just she doesn't need to say it."

Many New York City-based bloggers and a few from out of town were on hand to show their support for the event. This photo from Chicago-based plus size fashion blogger Curvatude was a unique take on the "usie."

Texas-based blogged NatalieMeansNice showed her support of #PlusIsEqual with this stunning shot.

One of the plus size fashion community's most beloved voices Gabi Gregg took to Twitter to express her reaction to the MC at the event announcing she had lost 80 pounds. Though she pointed out that she has no personal issues with Lane Bryant or brands doing body positive campaigns, she said that weight loss talk goes against what should be an empowering message of loving one's body.

12. Can Capitalism And Empowerment Co-Exist?

Bustle's own Amanda Richards (and founder of the #ImNoModelEither campaign) questioned whether empowerment can come from a capitalist brand seeking more than just the empowerment of its customers.

Some fat activists reacted with the #IfPlusWasEqual hashtag, which points out that the campaign would not be necessary if the equality of fat bodies in relation to not just straight size bodies but fellow fat bodies was not in question.

Though the campaign message of #PlusIsEqual states, "We believe in equal representation of women of all shapes and sizes across media and culture," many noted the lack of size diversity in the campaign, which left them feeling the exact opposite of body positive.

15. The Conversation Itself Is Important

As UK blogger Callie Thorpe of From The Corners of The Curve pointed out, the dialogue sparked from these campaigns is important. When it comes to fighting for size acceptance, individuals have a right to express their own opinions on how that message is being portrayed.

As is the case with any public campaign of this gravitas, reactions are bound to be mixed. The major takeaway we should be walking away with in such instances, however, is that movements meant to inspire diversity should actually focus on promoting that diversity in any way they can.