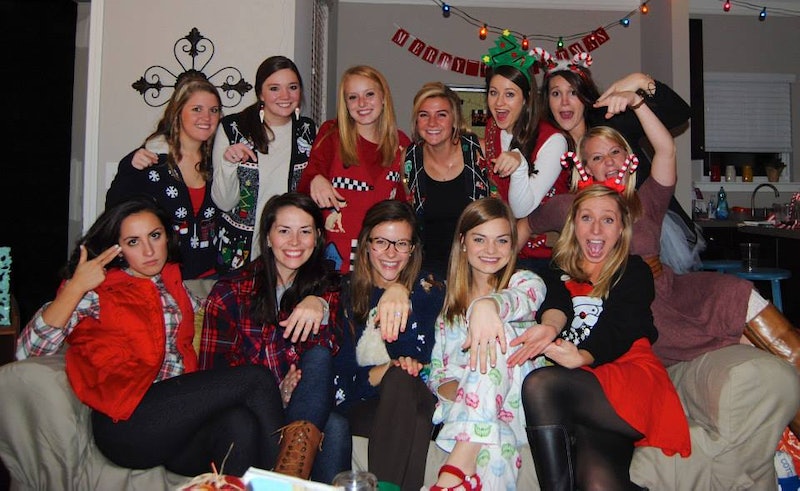 We all know weddings have gotten out of control, but what about bridal and baby showers? A recent "engagement season" photo gone viral has prompted a discussion of how we celebrate engagements, marriages, and births these days. It prompted HuffPost Women blogger Valerie Alexander to call for a ban on both weddings and baby showers (overreaction much?). Others have made more nuanced critiques (and defenses) of baby and bridal showers.

I've been lucky so far — my friends and family members have had perfectly tasteful and minimal showers. Family affairs tended to be heavy on traditional gender norms and heavier on dips involving cream cheese. Friends' showers have been co-ed affairs where Bud Light is served alongside tea and things seem a bit more reflective of individual tastes then the typical by-the-book event. Even the bachelorette parties I've attended have been pretty chill. But I hear horror stories. And I see Pinterest. I know that, in some circles, bridal showers, baby showers, engagement parties et al. can be elaborate or painstakingly planned affairs.

Alexander thinks the celebrations surrounding marriage and motherhood tend to overshadow other female accomplishments. You'll get no argument from me there. But Alexander seems to blame individual women for these things, suggesting that many young women want to be brides, not wives, and that girls today are getting married and having babies strictly for the party potential. She knows their motivations because .... how? That's not important. Alexander is sure that kids today are marrying and procreating to get pretty dresses and plastic baby bottles full of jelly beans.

But let's not be too down on girls and women participating in elaborate bridal and baby showers. Moms, grandmas, friends, siblings, and in-laws tend to drive these decisions, either overtly or with guilt trips and pressure. Not every tacky, pink-overloaded baby shower is necessarily that way because the mom-to-be says so. And celebrating marriage and motherhood doesn't take away from celebrating other accomplishments. As Senti Sojwal writes at PolicyMic, the real issue is "cultural attitudes that prevent women from feeling empowered in their choices, whatever those choices may be."

What we need isn't an end to baby and bridal showers but a re-imagining of them. For baby showers, co-ed just seems to make sense. As Tracy Moore at Jezebel writes: Dads-to-be could use baby stuff, too. And "what if the expectant mother is friends with dudes? I mean, most women are good friends with dudes. Why do they get a pass on this huge monumental event? And moreover, why don't they have to fuckin' buy you anything?"

Most importantly, not including dads sends a mixed message about the role we want modern men to play in families. "We live in a time when we want men to be equal parents and partners, but we leave them out of opportunities where they might gain understanding of everything they'll need to know as parents or partners," writes Leigh Naturkach on baby showers at Role/Reboot. Naturkach also notes that "showers — for weddings, babies, or otherwise — came from a time when people were just starting out and couldn't afford to stock up their homes." Many of today's couples live on their own (maybe together) for years before getting married, and may be well into their professional careers (and earning power) by the time they have kids, and this gives us opportunities to rethink the "frantic consumerism" that surrounds baby and bridal shower culture.

More like this
Why You're Seeing Green Bandanas At Abortion Rights Protests
By Lexi Inks
How To Come Out Online, According To Trevi Moran
By Melanie Mignucci
6 Expert-Approved Tips For Wedding Guest Makeup
By Olivia Rose Ferreiro
22 Gorgeous Wedding Manicures For Brides & Bridesmaids
By Olivia Rose Ferreiro
Get Even More From Bustle — Sign Up For The Newsletter