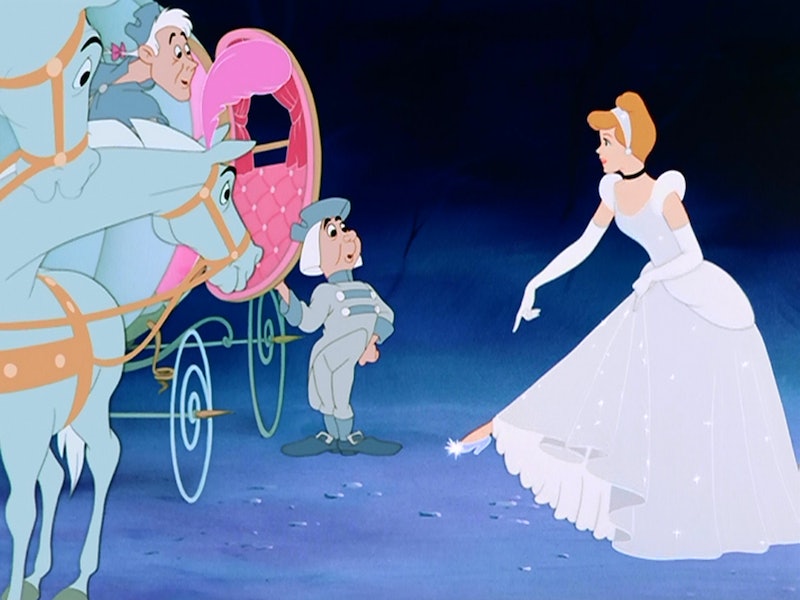 Once upon a time, there was a magical land called Brooklyn, and a girl who sang to the morning doves on her fire escape. That girl, formerly of the New Jersey suburbs, was gifted a copy of the Brothers Grimm's Fairy Tales as a housewarming gift from her dearest friend... and subsequently had all her notions of Disney princesses shattered. See, aside from the mass parental deaths that plague each movie, princess films are all about singing to birds and happily ever afters. But, believe it or not, Disney films are a far cry from the fairy tales that they're based on.

See, to make things appropriate for children, the more gruesome (or just plain awkward) elements don't make it to the big screen. I mean, you and I both know how Disney is already imbibed with historically inaccuracies, right? Well, the source material for the more whimsical tales are just as butchered. Trust me, there are a lot of horrific stuff (and horrific feet) that got cut along the way.

Maybe that's for the best, though? If you think I'm just playing, then take a gander at these six ways Disney princess classics differ from the original fairy tales.

1. Snow White And The Clumsy Coffin

So, first of all the evil queen requested that the huntsmen deliver Snow White's lungs and liver to her to eat. Honestly, I just go to Applebee's for a victory dinner, but whatever floats your boat, dude. However the main difference is in the way Snow White wakes up from her undead state. In the OG Disney film, Snow White is awakened by true love's first kiss, really a trope codifying moment when it comes to coma deux ex machinas. In the original story, the prince thought Snow White was so beautiful that he was basically going to hijack the coffin.

Um, why? What? As apartment decor? "Hey, this is my dead girl coffee table, really swank, right?" However, the prince and his men dropped the coffin, and the piece of poison apple dislodged from Snow White's throat, waking her up. Best part, though? Snow White passively aggressively invited her stepmother to her wedding, and then made her dance in flaming hot iron shoes until she died. Snow White has no chill.

2. Cinderella And The Perfect Heels

I grew up with the Cendrillon version of Cinderella, in which Cindy forgives her stepsisters and matchmakes them with some sweet lords. In the Disney version, they're not really treated as kindly so much as they're treated with ambivalence. In Grimms' version, Aschenputtel, those women get served.

When the glass slipper is getting passed around to every maiden in the kingdom, the stepsisters go to brutal lengths to fit into that slipper. They cut off their toes and heels respectively, and the prince falls for it twice like an idiot until some doves tell him otherwise. Later, at Cinderella's wedding, the same doves peck the sisters' eyes out as retribution. First of all, dark. Second of all, couldn't the doves have done this earlier, when Cinderella was getting abused by her entire family?

3. Sleeping Beauty And The Importance Of Consent

Plotwise, Disney's Sleeping Beauty is more or less a blonder Snow White, with fairies instead of dwarves, and true loves kiss is still the endgame. However, Giambattista Basile's version of Sleeping Beauty only mirrors Snow white in how disturbing it is.

In that variant, a king stumbles upon the unconscious princess (named Talia) and has sex with her, which is infinitely more horrific than the already sketch nonconsensual "true love's first kiss." Somehow, Talia manages to give birth to twins while unconscious, and wakes up only when one of them sucks the splinter out of her finger. I like the Disney version better.

You know how I hate Princess Ariel? The mermaid in Hans Christian Andersen's version is somehow worse.

This little mermaid has her tongue cut out in exchange for a body, and she's granted some sweet dance moves. However, whenever she dances, it'll feel like she's walking on sharp knives. Ultimately, the little non-mermaid can't make the prince fall in love with her, and he marries another princess. The sea witch gives the non-mermaid a dagger and is like, "Well, if you can kill him, we'll call it even, and you can become a mermaid again." But the non-mermaid is like, "Nah, dude." And then she turns into sea foam? Those are a lot of changes to make for a guy you only saw like once.

5. Beauty And The Beast And The Sisters

Actually, Beauty and the Beast isn't that bad. At least comparatively there isn't anything strikingly gruesome in Jeanne-Marie Leprince de Beaumont's original tale.

The only thing of note is that Beauty (i.e. Belle) is the youngest, prettiest, and kindest of three sisters, and she's sent to be the Beast's companion after her father offends the creature. She dreams of a handsome prince hidden in the castle, the un-enchanted beast, and her sisters dream of her being eaten by the monster because they're horribly, horribly jealous. It is unclear if Beauty reads or not. I'm just glad she doesn't turn into sea foam.

6. Rapunzel And The Little Slip Up

Weirdly enough, Tangled doesn't stray too far from the original source material, at least when it comes to disturbing moments. Flynn Ryder is not in Grimms' version, sorry to say.

But, in the first version of the story, Rapunzel, who is being repeatedly visited by the prince, gives away his visitations to her captor. How? She casually remarks that her dress isn't fitting... because she's preggers. Whoops. Luckily, she gets her happily ever after with only a haircut, and no appendages damaged. I can't say the same about the prince, though.

In light of all this, it's no wonder that Disney changed some things around to make these stories more relatable to small children. Because yikes.