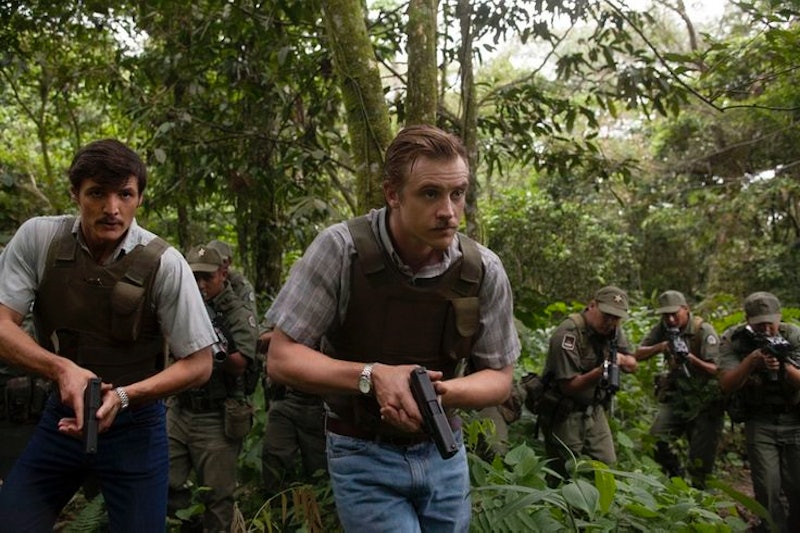 While watching the newest Netflix series Narcos, chronicling the rise and fall of cocaine kingpin Pablo Escobar, the facts continually seemed stranger than fiction and worth a quick Google search. But, as promised in the “based on a true story” moniker, the plot stays pretty close to the events of Escobar’s life. What about some of the other characters, though? Does Narcos have an accurate portrayal of DEA agent Javier Peña?

While the show does take creative licenses, changing names or details at times, the story, as it unfolds, is pretty accurate. As the season progressed, I found myself fact checking details, like Valeria Vélez? She’s based on real-life journalist — and love interest of Escobar — Virginia Vallejo. Diana Turbay? [Spoilers ahead!] Yes, Turbay’s assassination was a tragic accident. The plane crash? It happened. And, many of the facts don’t even need to be Googled because the show provides real life news footage to accompany these tumultuous scenes.

So, how did the show get to be so accurate? Obviously, a ton of research, reading, and interviewing went into Narcos, but accuracy is also maintained with the help of real life retired DEA agents Javier Peña and Steve Murphy (Yep, they are real too), who serve as consultants on the show.

"They [Narcos creators] hired me about a year ago, me and my partner," Peña said in an interview with the Houston Chronicle. "We just told them what it was like, our participation, and the chronology of how it happened."

Peña and Murphy also sat down together for an interview with Observer, where the ex-DEA agents discussed living the story. Murphy, true to character, cracked a couple of tough guy, West Virginian jokes while discussing his role as a consultant. When asked what consulting entailed, Murphy answered:

A paycheck [laughs]. No, they call us with questions. Once we went through the whole story, the whole manhunt. As they would start writing and start filming as well, they would call and say "OK, what type of weapons did you have available back then? What did the good guys carry? What did the bad guys carry? How do you do a surveillance? How do you handle informants?"

The pair also recounted the real dangers they faced while searching for Escobar. They noted 15 car bombs a day and large sums placed on the heads of cops and DEA agents — things really were that dangerous. And, it’s true that the chase for Escobar was that difficult. Murphy said they were so close to capturing him on multiple occasions, “[his] coffee would still be warm.”

While so much is factual, the biggest difference between the show and reality is that Murphy, who’s character narrates the series, didn’t arrive in Colombia until a few days prior to Escobar’s surrender — that’s most of Season 1! The majority of Murphy’s real life chase won’t be depicted until Season 2. But, what about Peña? What from his story is true?

Peña arrived in Bogotá, Colombia in 1988. This was, according to Peña’s Observer interview, the height of the search for Escobar. So, everything we have seen unfold on the series, Peña lived. But, the first words we hear to describe Peña on the show are that he is an “a**hole.” Is that an accurate title? When asked for his thoughts on this, he said:

I mean, we told them the story. We told them the facts of what happened. There are some people, which is true, that I didn’t get along with at the embassy. Especially the CIA people, I never got along with them. So they’re using some of that.

So, it seems that with Peña's input to the series, his character is pretty true to life. Will it stay that way through Season 2? We'll have to watch to find out.