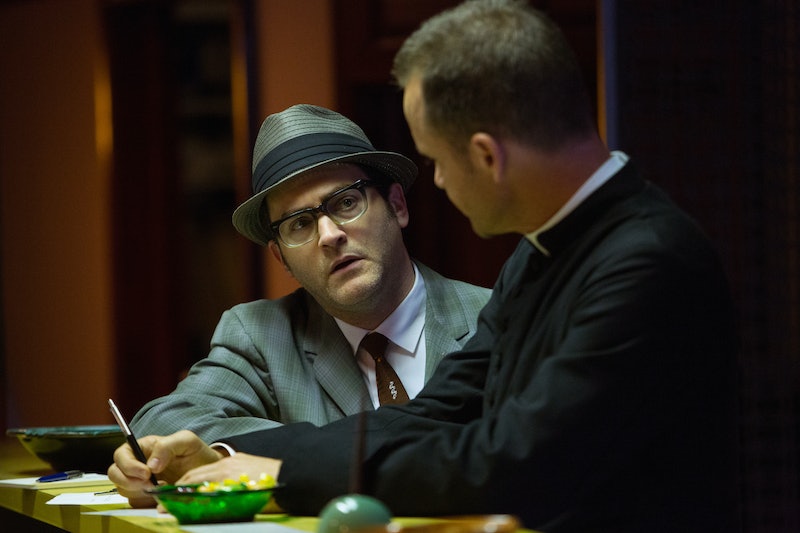 You probably know his face from Boardwalk Empire, Blue Jasmine, Lincoln, Hitchcock, or Hugo, but you might not know his name. Actor Michael Stuhlbarg has made a career of evocative, scene-stealing performances as the man behind historical figures, breaking out with a lead role in the Coen Brothers' 2009 period piece, A Serious Man. And this year, he's adding to his long filmography of biopics and historical credits this fall with Pawn Sacrifice, a film about chess legend Bobby Fischer; Steve Jobs , in which he plays programmer Andy Hertzfeld; Miles Ahead, a Miles Davis biopic; and Trumbo, where he plays Edward G. Robinson, a peer of the blacklisted screenwriter. It's safe to say he has a type (not to mention a probable trip to the Oscars) — and over the years, he's learned a thing or two about preparing for the parts.

"I want to be able to see the character when I look in the mirror," Stuhlbarg tells Bustle. An artist who once yearned to do cartoons ("I feel very much at ease with a pen in my hand," he says), he sketches out how he envisions his characters might appear before he steps into the role. He draws out his fictional roles to a greater extent than nonfictional ones, because more channels for creativity are available to him.

Yet always, the physicality of a character is what grounds his performance. In Trumbo, he explains, the film's budget permitted him to wear a prosthetic nose, and the more elaborate costuming choice allowed him to fully inhabit his role as Edward G. Robinson. Stuhlbarg, a Golden-Globe nominee (for A Serious Man), is something of a chameleon on-screen, due in no small part to his aptitude for figuring out how a character looks and acts, and reflecting that in his own mannerisms.

"I try to morph myself as much as possible into that person," he says. "How would I behave under these circumstances? How did they behave historically?"

Stuhlbarg's sensitivity towards the appearance of his characters may have its roots in his formal drama training (he's an accomplished stage actor), or perhaps in the time he spent working with acclaimed French mime Marcel Marceau. In researching Trumbo , he learned that his character Robinson was "something of a clumsy fellow," which he works into his performance at a few intervals. Though Robinson was well-known in the early 20th century, it's small details like this one that lead audiences to feel that they're encountering a famous figure anew.

In Pawn Sacrifice , Stuhlbarg aptly translates the ambiguity of his character's motivations — it's still historically contested whether Paul Marshall, Fischer's manager had any affiliation with the CIA, although his porkpie hat and thick-rimmed glasses are spy favorites — into his performance. The character is actually an amalgam of several figures who were close to Fischer during his meteoric ascent to chess stardom. But a real Paul Marshall existed, and that was the man Stuhlbarg focused his research on. He unearthed the website of Marshall's wife Bette, a professional photographer, from whom he received a series of photographs and a "wealth of knowledge" about their time in Reykjavik. He has a knack for uncovering the minutiae of his characters' biographies — it's even rumored that the writers for Boardwalk Empire would fact-check with Stuhlbarg when writing background for his part.

This isn't to say Stuhlbarg's performance is all exteriors. Though not a chess player himself, he dabbled in Bobby Fischer Teaches You Chess, a handbook by the late player himself, in preparation for the role. It gave him insight into the obsessive nature of a game that combines strategy with personal investment. Try to summon that feeling of leaving an exam knowing you missed a question, or of forgetting to send a critical message, and you might get a sense of what it is to second-guess a chess move. "If it's a bad move, you find out quickly," he says. "You feel it internally if you make a bad move."

Perhaps it's Stuhlbarg's shape-shifting abilities that allow him to so adeptly play historical figures. It doesn't discount his performance as fictional characters, as A Serious Man demonstrates, but it does mean that he can ally himself with established images of historical figures while also breaking the mold a little bit at a time.

"I’ll try to follow that instinct, but I’ll also try to break out of that a little bit as well," he says. At least, "until it just seems like it has to be a particular way." And that's when the camera starts rolling.

More like this
'Wakanda Forever' Is Already Opening Doors For Mabel Cadena
By Grace Wehniainen
You Definitely Know The Voice Of Shuri's AI In 'Black Panther: Wakanda Forever'
By Brad Witter
This James Bond Event At Abbey Road Studios Was A 007 Fan's Dream
By Samantha Rollins
The 'Love Actually' Reunion Is Missing A Major Player
By Bustle UK
Get Even More From Bustle — Sign Up For The Newsletter