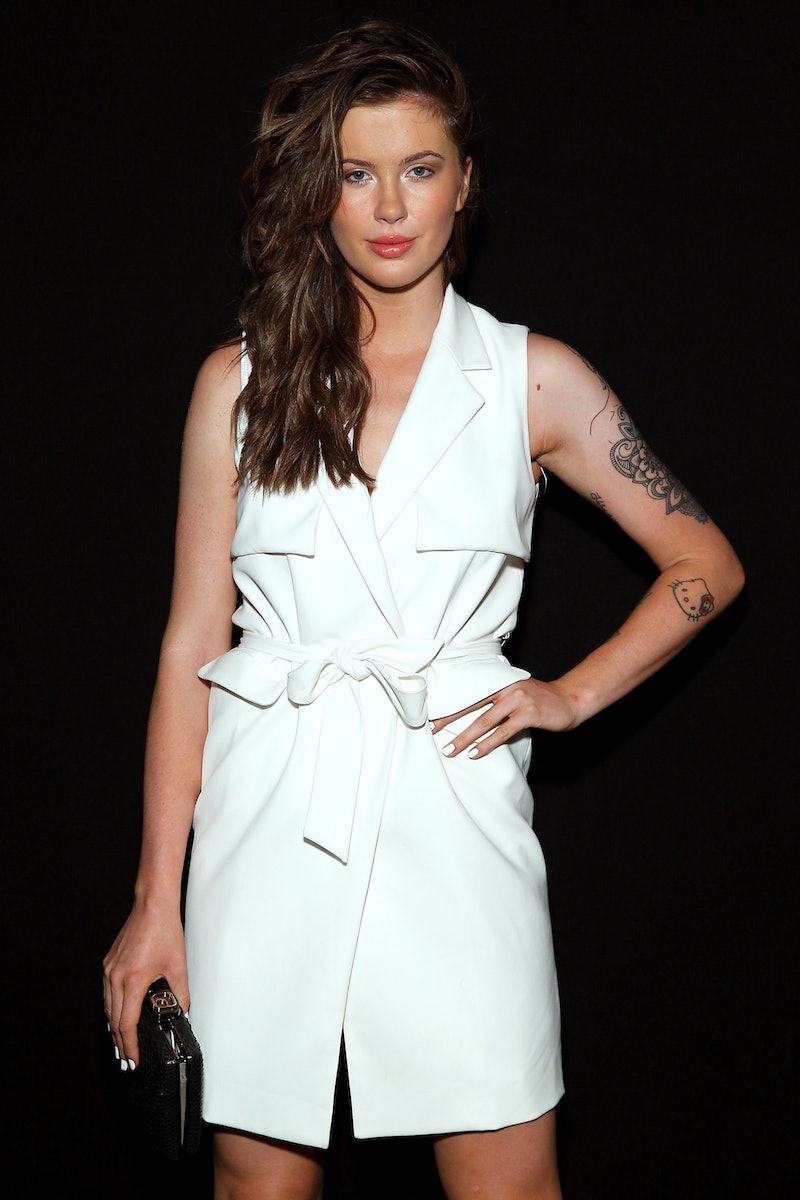 Alec Baldwin's daughter is no stranger to the tattoo parlor, but the model has added an unexpected new addition to her collection. Ireland Baldwin tattooed David Bowie onto her arm, the latest of her quirky collection of body art. According to People, she debuted the look at a Fashion Week show she attended this week with stepmom Hilaria Baldwin.

I've heard of pre-Fashion Week piercings, but it looks like tattoos may be another NYFW trend on the rise. Baldwin's ink is a tribute to Bowie's "Aladdin Sane" album and the iconic cover art. The singer's red mullet is accented by red and blue lightning-shaped face makeup. Baldwin's tattoo sticks to a black-and-white theme, minus the striking red lightning across Bowie's face.

The tattoo joins several others on the model's arm, including a large stylized flower and a smaller Hello Kitty on her forearm. It looks like her famous father Alec Baldwin also joined his daughter when she got her new ink. NYC-based tattoo artist Jon Boy posted an Instagram of the two at West 4 Tattoo in Manhattan. Cute!

Luckily, Baldwin is incredibly active on Instagram and is all about the selfie, so she's already posted several pictures of her new ink for us to gawk at.

Here she is at the Badgley Micshka show today, where she debuted the look (alongside Hilaria and baby half-sister Carmen).

She also posted a more close-up version of the tattoo yesterday.

The model's tattoo evolution started two years ago when she got the word "Truth" inked on her back, and from there, she seemed pretty addicted to new ink.

Around the same time, she got a lotus flower tattoo on the inside of her forearm.

Her upper arm, where the David Bowie tattoo is, has been totally taken over by tattoos. First came the arrow, followed by the large black flower and Hello Kitty.

She added another tattoo to her wrist as well, a kind of out-of-place seeming bra on her wrist.

Baldwin famously dated rapper Angel Haze before their breakup in April, and the two got matching couple tattoos while they were together. The rapper tweeted a picture of the tats in April 2014. They're inked on their wrists and have the phrase "we can be heroes," along with tiny Batman and Robin-esque face masks.

Finally, she also has a finger tattoo that says her last name (cousin Hailey Baldwin, who's also a model, has a matching one).

Considering the fact that Baldwin is only 19, that's a serious amount of ink covering her body. (And that just covers her visible tattoos!) Here's hoping she doesn't have tattoo regret, but hey, there's always laser removal if she does.