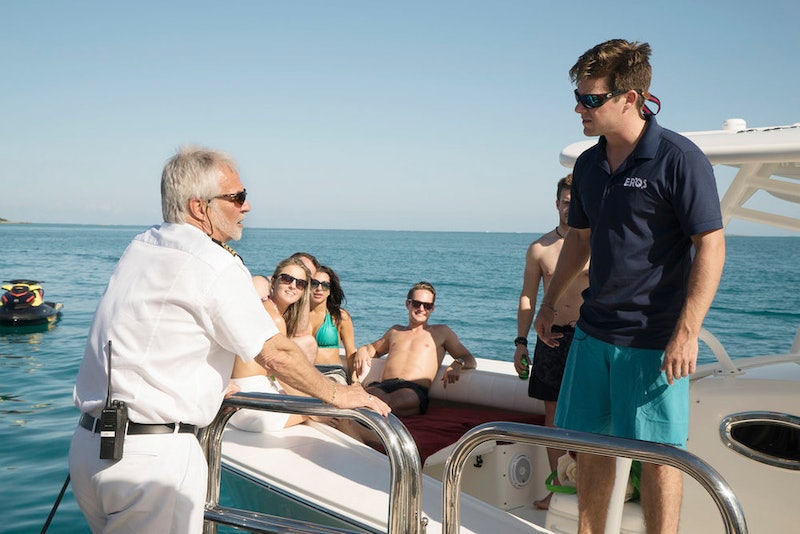 Is it just me, or has Season 3 of Below Deck been a bit heavy so far? There was so much tension and animosity aboard the Eros when Don was a part of the crew, so when he quit at the end of last Tuesday night's episode, it was like a huge weight lifted off of the crew. It seemed like they were all ready to finally enjoy the charter. So Dean Slover's demand for a crew diving competition came at exactly the right time.

Yes, of course Dean, the most high-maintenance charter guest that has ever been on Below Deck would make the whole crew drop everything just to entertain him and his guests. But at least he offered $500 to the person with the best dive as a bit of an incentive. As Captain Lee said during the episode, "There are no depths to which we will not sink to get a good tip." Since every crew member — with the exception of no-fun Leon, of course — participated in the dive-off in some way, clearly there was never a truer statement than that.

And I have to say, the crew brought it to Dean's diving competition. Many of them have spent their whole lives on the water, so that really should come as no surprise that it would be their calling.

Amy dressed as a patriotic cheerleader for Team Dean and did a belly flop. Connie did a pirouette into the water in a shark one-piece and tutu. Kate looked like a lobster diver, like as if a lobster was a diver with her red Gumby-like diving suit because she does not get her hair wet for nobody. Emile put a noodle on his, well, noodle and did a cannonball. Eddie wore a black mustache and sombrero as he danced around the boat with maracas in his hands portraying his slightly offensive Mexican alter ego Eduardo Sanchez before jumping in the water.

But the crew member who stole the show was Rocky. Her hot pink wig, sultry saunter, and reveal of a nude swimsuit under her T-shirt was certainly eye-catching, but it was her spot-on dive that really impressed Dean and his charter guests, and you know that's not easy to do. She was a Junior Olympic diver in another life, after all, so she clearly had a fin up on the competition. If only she was as good at being a stew as she is at jumping in the water.

Unsurprisingly, Rocky snagged the $500 from Dean, who was dressed up as top Greek God Zeus during the toga party on the yacht, lightning bolt and all. But really, Dean is the one who should be rewarded here for bringing a smile to my face, which, as I mentioned previously, has been sadly missing during this season of Below Deck so far. Captain Lee even said the dive-off was a great idea and that he had never seen the crew and guests laugh so hard together. I don't think I've ever laughed so hard at Below Deck.