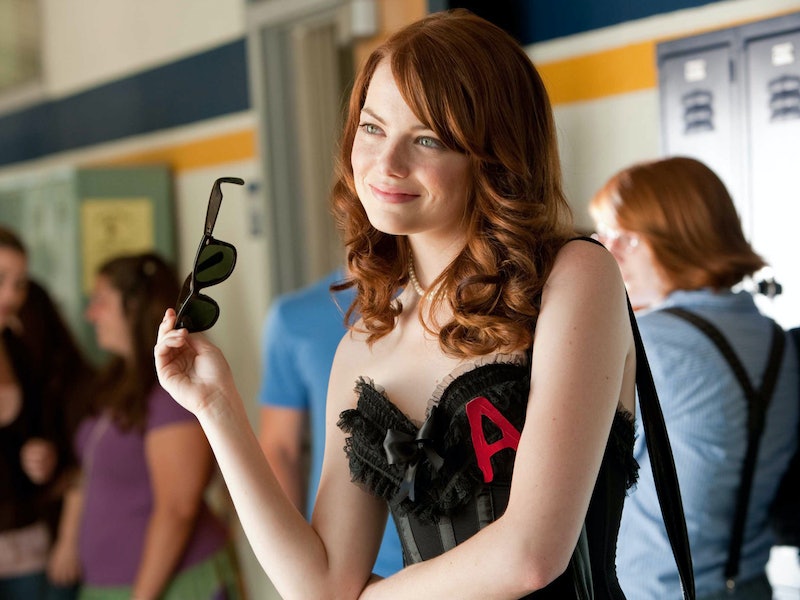 Easy A is one of the most underrated teen movies — actually, movies in general —of the past decade. Not only did it show the world that Emma Stone could be a comedic genius and a leading lady, but it had an ensemble cast to knock your boots off: Stanley Tucci, Patricia Clarkson, Amanda Bynes, Lisa Kudrow, Cam Gigandet, and more. Besides being hilarious (seriously, this movie is so quotable), Easy A is one of the most sex-positive movies I’ve seen in years.

The premise of Easy A is this: Olive Penderghast (that’s Stone’s character) is pretty much in the middle of the social standings at her school. She’s not popular, but she’s not not popular either. She and her best friend, Rhiannon, just float. That is, until Olive allows her gay friend, Brandon, to tell everyone that they had sex so he won’t be bullied. The “losers” of the school come out of the woodwork and ask Olive to do the same for them (that is, lie about the sex), and suddenly, Olive is the school slut. She’s the town tramp who has never even had sex. People know her name that didn’t before, and Marianne Bryant, the town’s resident Christian, vows to make Olive repent for her “sins”.

Sounds like a sex shaming flick right? You’d think so, especially with the story being framed by Olive’s class reading The Scarlet Letter when all of this is happening. At first, Olive is kind of shaken by the rumors going around about her at school. I mean, it’s pretty traumatic for a high schooler to be called out like that.

But soon, Olive begins to own her alleged behavior, dressing in corsets that she embroiders with a red “A”. By deliberately pushing her reputation in people’s faces, Olive shows that she knows what people say about her, and frankly, she doesn’t care. Olive doesn’t deny anything (even though literally nothing happened), and she does not talk about the fact that she’s a virgin. She is not ashamed of what the students and even the teachers at school are saying about her.

By throwing herself into the fire like she does, Olive really underlines how ridiculous it is that men get congratulated for having sex and women get vilified. After all, all of the boys (I can’t call them men) that Olive “has sex” with aren’t subject to this kind of scrutiny. Olive’s posturing is instead an intelligent, perfectly calculated act that demonstrates how sex is used against people, when really it’s no one’s business who is sleeping with whom.

At the end, Olive’s final webcam speech highlights this fact:

“That’s Todd. Not that I owe you guys any more confessions, but I really like this guy. I might even lose my virginity to him. I don’t know when it will happen, you know… it might be five minutes from now, or tonight, or six months from now, or maybe on our wedding night, but the really amazing thing is… it’s nobody’s goddamn business.”

Damn, Olive. You said it. That’s a lesson we all could stand to learn.