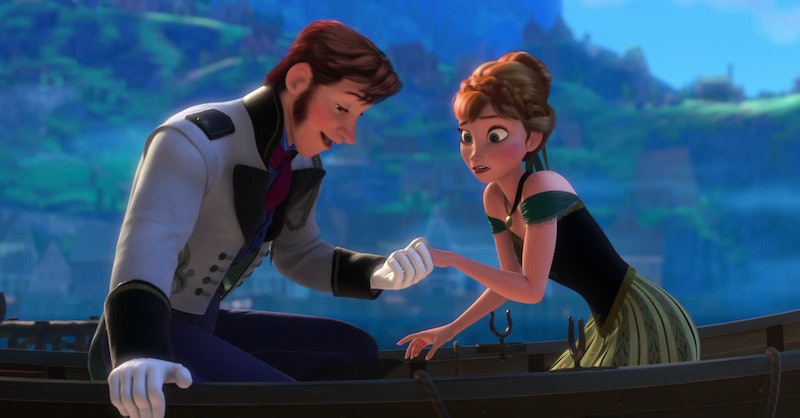 With Brave and, more recently, Frozen, Disney has garnered praise for embracing female-centric stories (finally!). But Disney princesses still have a long way to go. Despite being kick-ass females in their own right, Disney princesses seem to always need male love interests to complete them. On top of that, they all pretty much look the same and they're always supposed to be pretty and not show too much expression. It turns out that even Disney princesses' wrists ooze sexism.

Philip N. Cohen, a sociologist at the University of Maryland at College Park, wrote a post at The Society Pages entitled "'Help, My Eyeball Is Bigger Than My Wrist!': Gender Dimorphism In Frozen." He shows us that female wrists in Disney movies are a fraction of the size of male wrists.

Perhaps even more freaky is Cohen's realization that our Frozen heroine's eye is bigger than her wrist. Which, you know, is totally something you see everyday. And if you hadn't noticed these princesses' huge eyeballs before, you need to see what they would look like with normal peepers.

To prove the obvious ridiculous difference between male and female characters' wrists, Cohen used statistics on male and female wrist size of U.S. Army personnel from 1988. The average wrist size for women was 6 inches and 6.85 for men, which translates to a ratio of 1.15-to-1. With the smallest female wrist and the largest male wrist in the sample, the ratio still only comes out to 1.6-to-1. Not quite the 5-to-1 of Merida's parents in Brave.

You might argue that Disney is a cartoon, hence the exaggeration of features. But this dimorphism tells audiences that women should be smaller, cuter, and easily handled by their burly men — even if it means shrinking their bones, apparently. It's not natural, and Disney needs to wake up.