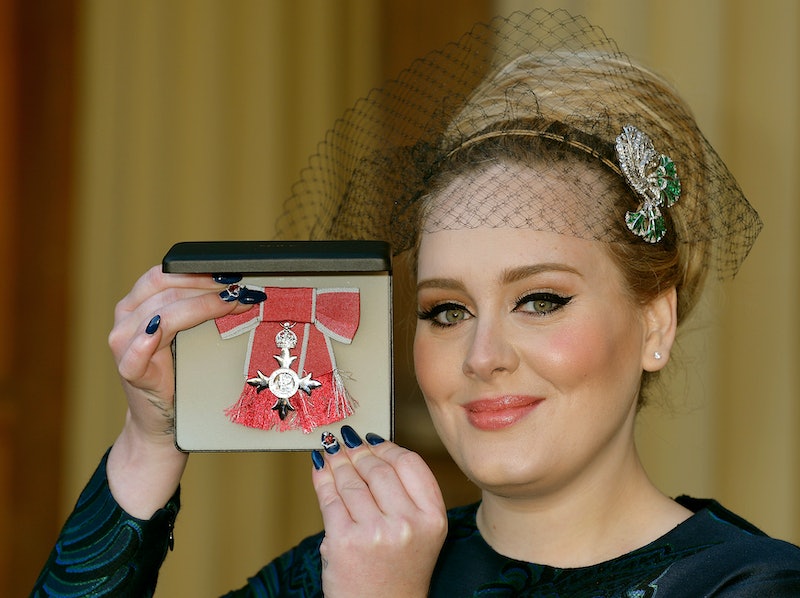 Well, it's official, Adele won 2013. Earlier today at Buckingham Palace, Adele received a Most Excellent Order of the British Empire from Prince Charles to cap off the off-the-charts epic awards year she's already had. This honor, unlike the many other awards she's won in 2013, comes with a title tacked onto it — the singer's new full name is now Miss Adele Adkins MBE. How cool is that? Adele was well on her way to achieving the infamous and highly-coveted "EGOT" (Emmy-Grammy-Oscar-Tony), also known as the "Grand Slam of Showbusiness", but now, with this new title, she's just completely blown it out of the water.

2013 was a big year for Adele. In January, the singer took home the Golden Globe for Best Original Song for her work on "Skyfall" the theme song for the latest Bond film, Skyfall. In February, she took home both a Grammy award for Best Pop Solo Performance for her live version of "Set Fire to the Rain" and an Oscar for Best Original Song. She's also received a nomination for "Skyfall" in the Best Song Written For Visual Media category of the upcoming 2014 Grammy awards.

Basically, she killed awards season — not to mention that she's taken home eight other Grammy awards since her debut in 2009. So really, becoming a Member of the Most Excellent Order of the British Empire is really just the icing on the cake to an impressive year of effortless award-winning.

So who really needs an EGOT or an EGOG (Emmy-Grammy-Oscar-Golden Globe) —or even Hollywood for that matter — when an entire empire is recognizing your greatness? We honestly wouldn't be surprised if Adele managed to achieve both acronyms by the end of her career, but we wouldn't blame her if she just gave up on mundane American awards and began her quest to become Dame Adele Adkins (a higher level of membership in the Order).