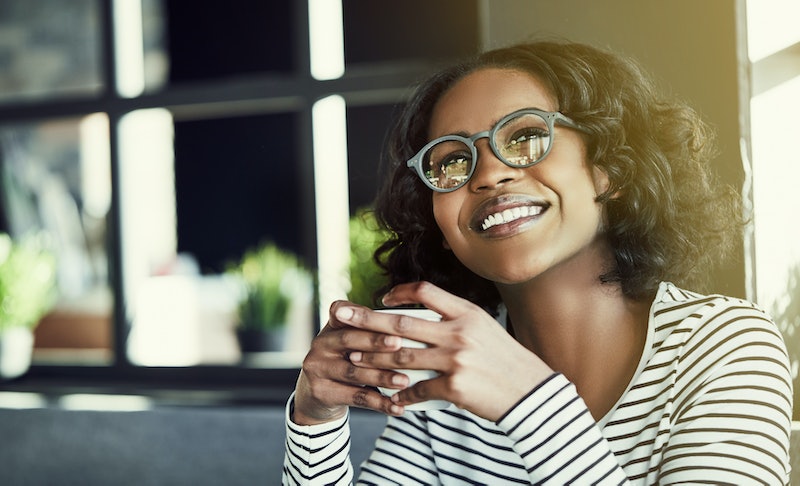 When's the last time you truly, honestly took a compliment? And no, I don't mean the hissed "why can't you take a compliment" of some idiot dude after he called you sexy on the bus. I mean taking in praise, absorbing it, and not immediately deflecting it with a parry-thrust manoeuvre worthy of an Olympic fencing medal. As women (although this does cross gender lines), we've been trained to avoid, deny, or dodge compliments as if they're incoming AK-47 hits — or run the risk of being called stuck-up, arrogant, or "full of ourselves". It's a nasty societal tic, and much like women saying sorry all the time, it is time to be utterly done with it.

Confidence is a problem in adult women in the Western world. It's demonstrated in job applications, where men feel confident enough to apply for jobs they aren't qualified for, while women exclude themselves far more readily — and so don't get the pay check. (The Atlantic called this "the confidence gap"). It also prevents us from highlighting our own achievements at work, putting them on display before bosses in pursuit of rewards and promotion. The idea of the human female as meek, humble, shy, and retiring is all very well if you're a 13th century nun, but it's hamstringing us radically in the 21st century — and running away from compliments is a symptom.

Damn it, we deserve that praise. Let's learn how to actually take it, rather than bowing to societal pressure to show humility and act like neat little ladies. Yes, I am great, thank you, and yes, I absolutely expected your acknowledgement of that fact.

1. Sit With The Compliment For A Second

Before you go into full-on deflection mode — even if you have a funny riposte handy, like "Oh, no, you're wrong, my hair looks like bees had a fight with an angry wigmaker" — shut it down for a minute, and just let the words of the compliment actually land. Whether you're showered with praise daily or it comes as rarely as water in a desert, every bit of human-to-human complimenting should be given its due and acknowledged.

2. Catch The Negativity Before You Voice It

A case of low self-esteem may demand that you cut a compliment to the quick before it inflates your head with a narrative like "You can't let anybody actually call you intelligent without correcting them. Do you remember that quiz you failed in 8th grade? You're a failure; the compliment comes from an inaccurate place."

This kind of negative thought pattern is common among depressives and perfectionists, and part of cognitive behavioral therapy is often focussed on challenging it and its assumptions. For the time being, though, know that the voice is in your head — and squash it if you sense it rearing out to take control of the conversation.

3. Resist The Impulse For An Automatic Return Compliment

You may believe that you take praise well — but if you immediately return with a bigger, better compliment, it may be that you're simply uncomfortable and couching your denial in a way that redirects attention. It's not a game of one-upmanship, and frankly, lingering on your own awesomeness after a compliment is allowed; don't immediately jump to smother the giver with something better, because it may be a refusal to take praise instead of "good manners".

4. Have A Standard Response On Call

My standard praise response is "I'm glad you liked it" — which is not great, as several people have pointed out, because it doesn't contain any proof of my own belief in the worth of the cake/libretto/whatever being praised. "Thank you, that's very kind" is a much more workable one, though you can alter the formality to fit the situation. Thanking is basically the order of the day, though, so build your standard response around that.

5. Don't Mitigate Or Argue With Praise

Arguing with praise — as in, physically taking on a compliment and unpicking it — is not only completely missing the point of what a compliment is meant to do (boost you up), but also insulting the person who formulated it. Denying their opinion to their face is hardly sociable behavior; they're allowed to praise you if they choose. (This does not apply to the aforementioned idiotic man on the bus, because it's not really "praise" or a "compliment". Argue away, in that case.)

6. Take The Compliment At Face Value

Even if you don't challenge the praise aloud, chances are reasonable that you may place it in a context that invalidates its real thrust. "She/He's just saying that because..." is a sentence that should not belong in your thought process. Does every compliment have to come with strings attached or a price tag? (Passive aggressive compliments do not fit this category, for the same reason cat-calling isn't: it's not praise at all.) Just take it as it appears, and don't challenge it mentally.

Friends don't let other friends say "Yes, but..." when a compliment appears. Don't let them do the dance of avoidance as praise comes to meet them; make them sit and hear it. Reinforcing praise when it seems to have been deflected or unheard may seem insistent or odd, but telling friends to just acknowledge that you think they're awesome, rather than trying to mitigate or get out of it, may do them good. Women at work should hear this, too — though with a lighter touch.