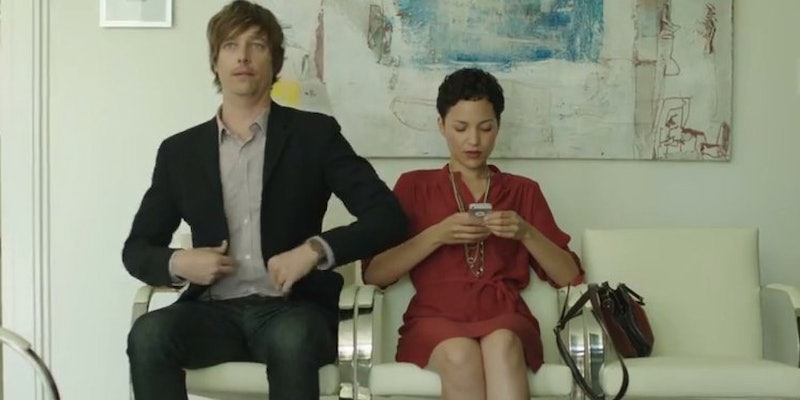 The idea that women apologize when they don't need to, for things that don't need to be apologized for, is woven so deeply into our culture that there is even a commercial about it: The wildly successful Pantene ad about women saying sorry this past June. But despite all the recent attention given to the issue — as well as the related feelings of guilt and shame that many of us also feel for apologizing in the first place — we don't seem to be any closer to unraveling (or ending) our sometimes-compulsive urge to apologize.

Do women spend so much time apologizing because we're raised to believe that more of our so-called feminine behaviors count as apology-worthy offenses? Are we apologizing in order to navigate our way through a still-sexist workplace, where issuing normal demands and requests can still brand a woman as "difficult" in the eyes of her coworkers? Are we apologizing to appear more likable? Are we apologizing as a way to commiserate with strangers? Are we genuinely stepping on a lot of strangers' feet on the bus?

To push back against the conditioning that tells us to be ashamed for merely taking up space or doing our jobs, here are 23 things that most of us have apologized for — but don't actually need to.

You're not burdening people every time you post about your new article/poetry reading/theater production/fund-raising marathon/survey that you need people to fill out in order to finish your graduate school thesis. Friends who want to know what you're up to are psyched to hear about it, and folks who don't care can block it out.

Asking someone who’s blocking your way to move

Sorry, but could you maybe possibly slightly consider not leaning across this entire stairwell that I need to walk down? Ah, sorry, didn't realize that you were playing a very important video game! I'll just go out the emergency exit or something.

Doing your job at work

We're often raised to feel uncomfortable with any kind of power we have, especially in the workplace. But you don't ever have to apologize for doing your job, or for expecting your coworkers to do theirs. ("Sorry, but did you have a chance to do literally anything that you are paid to do around here?")

Don’t want kids? Want kids earlier than your peer group deems acceptable? Want to get married right this second? Don’t want to get married ever? Prioritized your education or job above finding a partner and/or having a kid? You don't need to apologize for feeling differently from the folks around you (especially because they're not going to raise those theoretical babies for you).

Not looking “pulled together”

No one expects you to dress up to pick up a package from FedEx, or to go anywhere short of the Academy Awards or the prom, honestly — and even if they did, that would make them the problem, not you.

Similarly, if people are actually made uncomfortable by your short dress, they're the ones who need to take a long look in the mirror.

Real talk: Most of the time, people would just rather be at home in their sweatpants eating a block of cheese than engaging with the world in any way. So there is really no reason to treat canceling a coffee date as a tragedy equivalent to having run someone over with your car.

Being upset about something

You shouldn't apologize for getting "overly emotional" — especially when your emotions are totally appropriate for the situation, and the people who want you to keep it down and "act appropriate" are generally in the wrong.

Having worn ugly underpants or not shaved your legs

This specific apology is directed at your sexual partner, who, unless they are an amazing asshole, totally doesn't care, and is simply psyched to be in a position to inspect your legs, underpants, etc.

Making accidental physical contact, with anyone, at any time

Elbow rests are designed to be rested on by two pairs of elbows! Don't worry about it. If the person sitting next to you at the movies couldn't deal with passing physical contact, they'd be sitting in an inflatable bubble.

Eating something “unhealthy” in public

You're allowed to eat things besides kale smoothies and KIND bars in public, and screw anyone who tells you otherwise.

Reminding someone about something they needed to be reminded about

You shouldn't even have to be asking people to do stuff over and over — but if you do, don't let anyone (including yourself) make you feel like you're "nagging." Shit needs to get done, and damn it, you're the only one who has it together enough to remember!

Being passionate about a point or belief

Interrupting someone who's monopolizing a meeting or conversation

Not only are you well within your rights on this one, but everyone else listening to this hoser's 40-minute monologue on the sandwich he had for dinner last night will probably thank you.

Not paying immediate attention to every piece of communication you receive

This covers not immediately replying to emails, voicemails, texts, passed notes, or pebbles thrown at your window. Respond to them in your own sweet time. You're busy, and that's okay.

Asking someone to stop doing something incredibly annoying

Including but not limited to: folks dicking around with their phone at the movie theater, men taking up three seats on the subway, or your cubicle mate humming Katy Perry’s “California Gurls” next to you, to the point that you find yourself accidentally typing “Our third quarter earnings have been robustly BIKINIS ON TOP.” You don't need to preface your request that this person chill the eff out with a "sorry."

If people don't get it, perhaps they would prefer the puppet-based comedic stylings of Jeff Dunham. Not your fault!

needing some time to yourself

Don't apologize for putting your needs before anyone else's. Taking time for yourself helps you be a better, more relaxed, non-insane human being.

Asking for a raise

It's not a crime to ask to be paid what you're worth. In fact, the actual crime is likely being committed by your boss, who is quite possibly paying you less than your male coworkers!

Would anyone actually be better off if you don't ask a question and simply guessed about how you're supposed to process this check request/cook this quiche/operate this bumper car?

Not being perfect in literally any way

Did you spend $50 on a sweater instead of investing it in a stock portfolio that only deals with sustainable agricultural businesses? Did you blow off a lecture to go eat nachos? Did you sleep through that award-winning documentary about gravel? How dare you be human?

Apologizing all the time

What's clear is that none of us need another thing to feel guilty about — and that includes feeling guilty about apologizing. Apologizing isn't inherently bad — it can sometimes be a sign of empathy and caring. It's just not always necessary to do it.