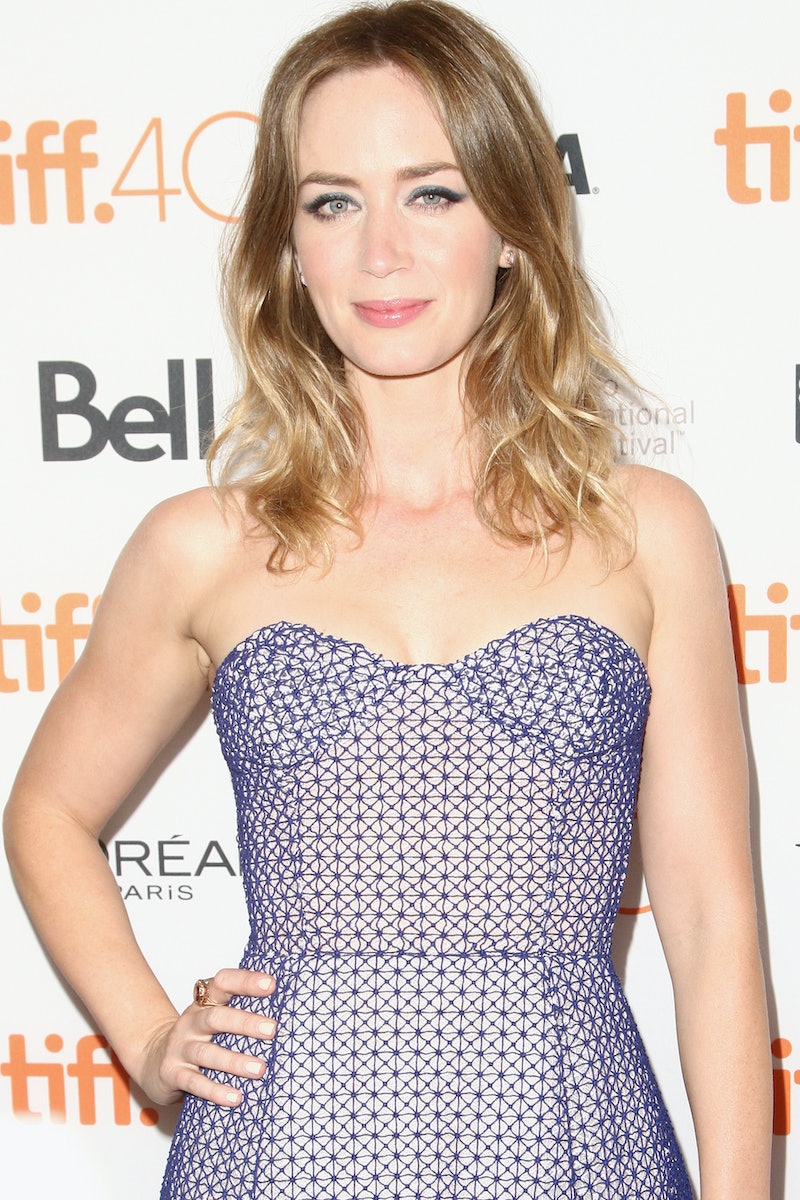 As a lifelong citizen of this country, I can say with a fair amount of certainty that there are few things Americans love more than the British. Their adorable accents, anything and everything Kate Middleton is doing, and obviously, the entire Harry Potter franchise are just a few major reasons why — reasons I have more than happily contributed to. But unfortunately, one of our best imports from England is getting a bad rap this week, and it's totally undeserved. It all started when Emily Blunt joked about regretting her recent American citizenship after watching the Republican debate last month, and things sort of snowballed from there. Taking the joke way too personally, Fox and Friends' Anna Kooiman and Steve Doocy suggested that if Blunt doesn't like it here, she should probably leave, and let American women have her acting jobs instead. Yes, this is something people actually said.

During an interview at a screening of her new movie, Sicaro, Blunt quipped:

I became an American citizen recently and that night we decided to watch the Republican debate, and I thought this was a terrible mistake. What have I done? I’m not sure I’m entirely thrilled about it. People ask me about the whole day. They were like, "Oh it must have been so emotional." I was like, "It wasn’t, it was sad. I like being British."

So after Blunt made a joke about being scared by the Republican debate — something that, let's be honest, scared most of us at least a little — she should leave Hollywood and that she "Dixie Chicked" herself by "alienating half of the country." Can we talk about how blown out of proportion this is? I don't feel alienated at all. And can we also talk about how it was actually very American of her to make fun of the US? Just saying.

And although Kooiman and Doocy couldn't identify too many of Blunt's amazing contributions to our culture (save for The Devil Wears Prada), I think it's imperative that Blunt stay in America whether she likes it or not. We need her here, and these are just a few reasons why.

OK, this was the only good point that these people actually made. Blunt's character in this movie was flawless, and I never get tired of watching it.

Her Marriage To John Krasinski

They're adorable together, and even though I am super jealous that Blunt is married to my all time top celebrity crush, I can't hold it against her.

If Blunt hadn't come to America, she never would have met Krasinski, and they never would have given the world this gorgeous celebrity baby. She's going to grow up to be best friends with Blue Ivy, I just know it.

Her Pranks Against Jimmy Kimmel

Every year, Blunt and Krasinski prank their neighbor, Jimmy Kimmel, and it's gotten way out of hand. However, that just means it's hilarious.

And This Moment With Ellen DeGeneres

Without the Blunt/citizen combo, this never would have happened. God bless America.