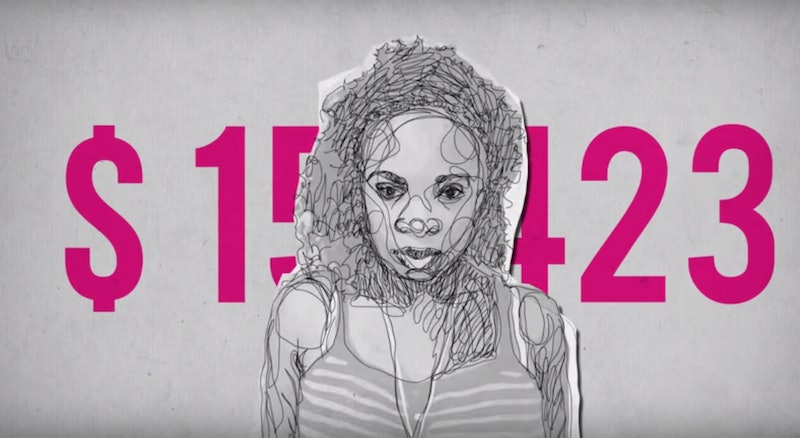 With the fall semester settling into full swing, the majority of college students are consumed with studying, partying, and figuring out what to do with the rest of their lives. For a disturbing number of female students, however, their academic and personal lives will come to a screeching halt as they grapple with the devastating physical and emotional consequences of campus sexual assault — but as Ultraviolet's new PSA detailing the financial cost of campus sexual assault shows, the ramifications don't stop there.

According to the video, the campus rape epidemic comes at a literal, monetary cost. Between legal fees, rape kits, and all the other obstacles to recovering from sexual trauma, each individual assault costs the victim an estimated $151,423 in the United States. Let that number sink in for a second. $151,423. In addition to the havoc wreaked on their personal lives, assault victims end up paying the cost of a luxury car or a house; it might even cost more than the education for which they attended college in the first place. Yet somehow, people often seem to worry more about the cost to an accused rapists' reputation on campus.

Ultraviolet's video goes on to discuss the emotional, legal, and physical consequences as well. First, there is dealing with college administrations, who are accused with disturbing frequency of hushing up assault victims to preserve their reputation.

Then there are the legal obstacles, as it's typically up to universities to handle sexual assault cases rather than the police. In theory, this is to protect victims' interests in a legal system where only two out of every 100 rapists serve jail time; in practice, however, it can lead to the universities protecting their own interests instead. Throughout all this, victims are expected to keep their grades up, despite the potential damage to their reputation on campus. Add in the terror of attending the same school as their accused rapists, and it's a wonder that victims are able to graduate at all.

This, of course, assumes that the victim isn't pregnant as a result of their assault; as we've discussed many times, antiquated and patriarchal legalities surrounding abortion make it difficult to terminate an unwanted pregnancy. And if the victim chooses to keep the baby, it's still an uphill battle; as the video points out, 23 states have laws granting rapists custody rights.

"Whether the rapist is a star athlete or an honors students — we can no longer allow rape on college campuses to continue to be swept under the rug, and have the true costs of sexual assault ignored," Ultraviolet cofounder Shaunna Thomas said in a statement provided to Bustle. "It’s time for universities across America to protect the right of women to get an education without risking rape and the subsequent backlash that too many experience when they confront their rapist."

It should be noted that the video focuses on female victims of assault, which is most likely due to statistics indicating that 91 percent of campus sexual assault victims are women. Male sexual assault victims are a group that is often ignored — especially in a culture that perceives men as sexually voracious animals who "can't be raped" because they would never turn down sex. It's vital to remember that these same physical, emotional, and legal consequences are true for male students as well.