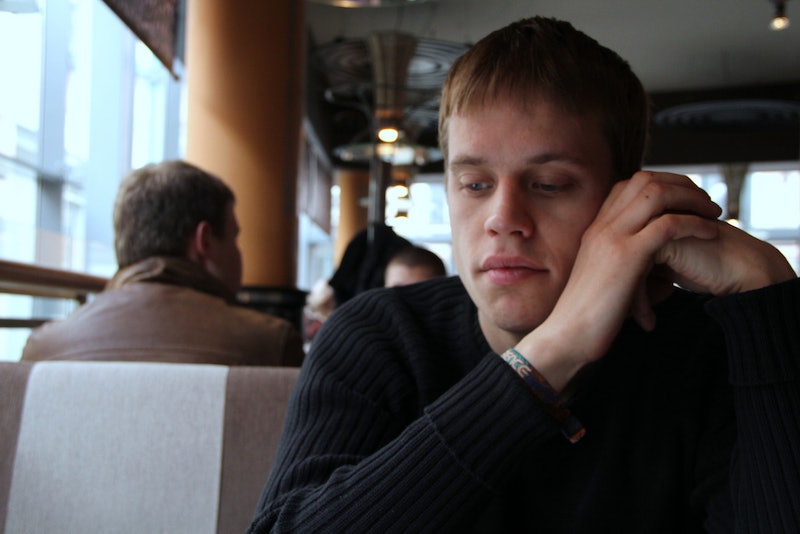 How often do you tell men they look nice? According to Casey Quinlan's article in The Atlantic, women tend to receive more compliments on their appearance, and men don't get the same treatment — perhaps because men don't take compliments well. Apparently, compliments are a social tool only men are supposed to use. You know, as in, "You look really pretty. Now that you're all buttered up, let me lord my manly power over you." And if you dare compliment a man, he may think you're threatening that power.

According to a 1990 study (pretty ancient, guys) by researchers at SUNY Binghamton and the University of the Witwatersrand, compliments from men are easily accepted, especially by women, but compliments by women are more often seen as a threat (you're "face-threatening" him, in sociology speak). Researchers found that men perceived compliments as tools of social control used to embarrass and patronize them. And you just thought you were saying his shirt brought out his eyes.

Not only are women not supposed to compliment men, apparently it's even worse when other men do it, since it's perceived as a come-on. In her 2003 book, Sociolinguistics: The Essential Readings , Christina Bratt Paulston writes that for heterosexual men, "to compliment another man on his hair, his clothes, or his body is an extremely face-threatening thing to do, both for the speaker and the hearer." Because only straight men should be deciding what counts as attractive.

Women were generally given compliments on their looks, while men were mostly praised for their skills.

We seriously need to stop seeing power plays in all the nice things we say. Next time you want to praise a woman, try to go beyond the overdone "Great outfit!" for something more substantial — we've got awesome skills, too. And don't be afraid to tell a guy he looks good — the smart ones won't automatically assume you want to sleep with them. Can we please just get to the part where everyone is complimenting each other and we all gush when we hear nice things?