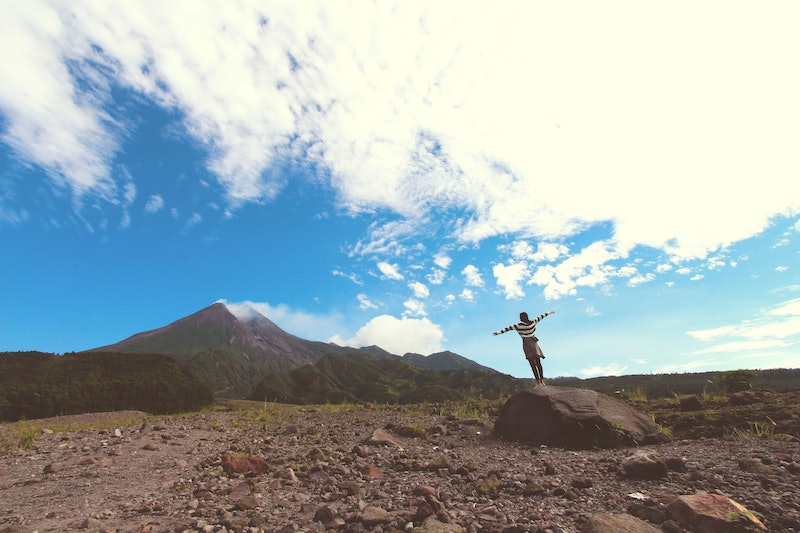 No matter what your parents, friends, rudest casual acquaintances or some random internet article you read says, the decision about whether to have kids or not is yours and yours alone. We should all be equally supportive of everyone's reproductive choices, and in a perfect world, everyone who crossed your path would respect your self-knowledge when it comes to the "should I have a baby?" question. In a perfect world, everyone would also always recycle and tampons would also be free and plentiful — so obviously, we don't live in a perfect world, as anyone woman who is public about her decision to not have kids can tell you.

Even though the number of women without kids is at an all-time high — according to 2014 census numbers, nearly half of all women between the ages of 18 and 44 don't have kids, and among women in their twenties, birth rates have dropped 15 percent since 2007 — there's still a pretty major social stigma for those who opt to not have their loins bear fruit. And even though obviously none of us owe anyone an explanation for any life choice we make, reproductive or otherwise, that doesn't keep people from asking those of us who have opted to not have children about our reasons for doing so. Often.

So while we're certainly not trying to talk anyone out of having kids — or tell anyone who already had kids that they've made a mistake — if you know or think that you don't want kids, but feel bummed out by people who tell you that you're giving up everything that makes life good if you take a pass on kids, consider the five reasons below. And the next time some stranger at a party randomly tells you, "I can't imagine any reason why someone wouldn't want kids," you can tell 'em, "That's funny — I can think of at least five."

This might sound like a petty argument on the surface — after all, how can you compare saving money compare to the miracle of creating life? Pretty easily, it turns out! Especially for those of us who are making less money than our parents did at our age and still paying off student loans so large, they feel purely theoretical. The average cost of raising a child born in 2013 to age 18 is $245,340 ($304,480 in 2031 dollars, adjusted for inflation), according to the U.S. Department of Agriculture. That's $13,630 per year per kid — and that's not even counting things like college, unexpected medical costs, any kind of private education, or the cost of fixing your mini-van after your teen crashes it into a fire hydrant because they got distracted while trying to put in a No Doubt CD (sorry, Dad).

And that's also not counting the expenses of childbirth and pregnancy itself. While folks lucky enough to work with an in-network obstetrician who is part of their insurance plan won't pay much, new parents with less comprehensive or inclusive health care plans can end up paying significantly more out-of-pocket for their births, which can run up to $9,700 for a standard vaginal birth or $12,500 for a cesarean section. And with or without insurance, a childbirth with complications can cost you hundreds of thousands of dollars (which will still be the least of your worries at the time).

For many of us, saving this money won't mean that we can blow it on something fun like a year chilling in Tuscany, or retire in a mansion designed to look like Hogwarts — instead, that money will mean that we can support ourselves, pay our bills, and live fulfilling lives without the constant looming threat of bankruptcy. Sounds pretty fulfilling to me!

2. If You Have A Partner, You'll Stay Happier Together

Most of us were raised to believe that kids are the glue that holds family life together, and that romantic relationships that don't evolve into parenting partnerships will eventually fizzle out. As one horrified relative once asked me, "If you don't have kids, what will you and your husband talk about?" But it turns out that, rather than reinforcing our romantic relationships, having kids actually puts a lot of strain on them.

According to a 2011 research paper published in the Journal of Family Psychology, 67 percent of couples see a significant drop in marital satisfaction following the birth of a child. The causes of this drop is satisfaction are myriad — short tempers from lack of sleep, disputes over who is responsible for all the new responsibilities a child brings, and lack of quality couple-time spent alone together are just a few common ones. And in a dispatch from the Department of Obvi, parents have less sex than the childfree — but this trend extends far beyond parents with new babies. One UK survey found that 23 percent of parents of teens had not had sex at all in the previous month.

While carrying a pregnancy to term certainly isn't the only way to become a parent, it's a very common one — and so it is worth considering pregnancy's impact.

Once upon a time, getting pregnant was like rolling the dice with your life — in the 1600s and 1700s, up to 1.5 percent of women died in childbirth, according to some historians. Today, we're doing better on the maternal health front than, say, the female pioneers who were journeying up the Oregon Trail; but pregnancy still presents a shocking number of health risks. In fact, a 2014 study conducted by the Institute for Health Metrics and Evaluation at the University of Washington found that rates of maternal death during childbirth in the U.S. were the highest they'd been in 25 years — for every 100,000 births in this country, 18.5 mothers died.

And while dying during childbirth is an uncommon but terrifying risk, there are a number of far more common health complications that many women experience during pregnancy — including gestational diabetes, depression, and high blood pressure, which are manageable for some women, but a serious health threat for others.

4. You'll Be Less Likely To Get Depressed

Has some random jerkwad ever told you, after you said that you didn't want kids, that the idea of getting old without having children is "depressing"? Well, guess what? According to a 2005 study of 13,000 people, published in the Journal of Health and Social Behavior, raising children is actually depressing — both mothers and fathers are more likely to experience diagnosed depression than their child-free peers.

And these results didn't just hold true for what seem like the obviously more depressing parts of raising kids (i.e. early childhood and when your teen is locked in their bedroom, blasting Elliott Smith and writing lyric poetry about how much they hate your guts). Parents were reported to experience clinical depression more often than their childfree peers even after their children had grown up and left home, too.

5. You're Likely To Be Happy With Your Decision

People can argue all the livelong day about whether having kids or staying childfree is the "right" decision — but according to research published in the snappily named Proceedings of the National Academy of Sciences, you're likely to be happy no matter what reproductive decision you made — as long as you did what you wanted, not what the people around you told you to do.

The study analyzed self-reported data from 1.8 million Americans and 1.07 people from other countries, and found that there was no "happiness gap" between parents and non-parents — which researchers chocked up to the fact that most study participants had made their own choice about whether or not to have kids, rather than having kids they didn't want due to social pressure or lack of birth control.

The lesson here, of course, is that when you're deciding whether or not to have kids, knowing that you truly followed your heart is the most (and possibly only) important factor. But knowing that you're not going to have to come up with $250,000 somehow over the next 18 years certainly helps, too.