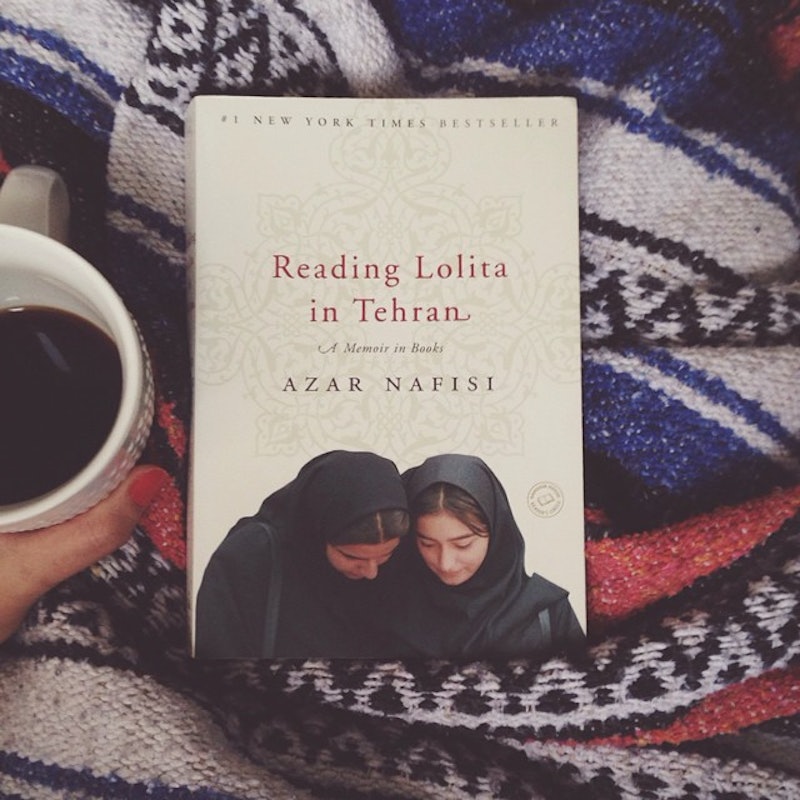 I have a secret for you: nonfiction books are kind of amazing. I know, I know, you read Walden one too many times in high school and as a result have sworn off all nonfiction entirely. You’re actually pretty convinced that you hate it. Sound familiar? (Unless you actually do love Walden, in which case: call me, we should get coffee sometime.) Not to discredit Mr. Thoreau here, but he’s not necessarily the first fellow you want to turn to when attempting to cultivate a diehard love of nonfiction — maybe a love of ponds, but nonfiction? Unlikely. That’s what Hell’s Angels is for.

Now, I’ve adored many a book across many a genre in my days as a reader, but in my opinion there’s nothing quite like falling into a spectacular love affair with a nonfiction book. It’s kind of like dating the bad boy in high school — his story is almost too compelling to be true, and with one rev of his motorcycle you’re hooked. (Seriously, you’ve got to read Hell’s Angels.) It takes a whole lot of pen-to-paper grit to tell a truly captivating nonfiction story; and the journalists on this list definitely have grit in spades.

Think you can handle the truth? (Aka: nonfiction.) After all, they do say that truth is stranger than fiction for a reason. Here are 10 nonfiction reads to check out if you think you hate nonfiction — because I really, really want to prove you wrong, once and for all. You'll thank me later.

Ten Days in a Mad-House by Nellie Bly

Nellie Bly was one of the original immersion journalists — you know, the writers who dive so far into their story that they actually become part of it? Intent on investigating allegations of patient brutality and neglect at women's mental institutions, journalist Nellie Bly faked insanity in order to be admitted to the Women's Lunatic Asylum in New York. Bly's research is detailed and disturbing, and ultimately resulted in budgetary increases for what was then (in 1887 when this book was published) the Department of Public Charities and Corrections. Can you say #JournalismForJustice?

The Armies of the Night by Norman Mailer

Normal Mailer's Pulitzer Prize-winning "nonfiction novel" is a retelling of the October 1967 March on the Pentagon against the Vietnam War, rendered in a way only a writer like Norman Mailer can. He casts himself as an almost ridiculously caricature-esque figure, from his raucous protesting to his subsequent arrest and night spent in jail. The absurdity of Mailer's telling mimics some of the absurdity of American history as well.

The Annawadi is a slum located alongside the international Mumbai Airport in India, and is home to a diverse and complex cast of characters. Over the three years that author Katherine Boo was present in Annawadi, she met children who made money picking trash and a college student, elderly women who had been ostracized from their community and a furious slumlord. Boo introduces readers to the politics and superstitions of Annawadi, and the literal life-and-death ramifications they have for the people who live there.

Orange Is The New Black by Piper Kerman

OITNB didn't become a hit Netflix series for nothin'. You may know some of the characters from screen, but on page these real-life women will horrify, amuse, confuse, and devastate you even more. (Plus, a whole lot of 'em don't appear in Netflix, so you need to read the book to catch the whole story.) When Piper Kerman was convicted of felony money laundering — a crime she'd committed 10 years before, during a past that in no way resembled her present-day life, she spent the next year in a minimum-security prison in Danbury, Connecticut. Her experiences there, and the women she met, would change her life forever.

There's just something about a Saturday night — am I right? In 1985, journalist Susan Orlean began traveling around the United States spending Saturday night in as many different kinds of communities as she could find: at a Park Avenue dinner party and with zydeco dancers in Houston, at a nuclear missile silo in Wyoming and at a quinceñera in Phoenix. This book will definitely make you rethink the way you spend your next Saturday night.

Even if you've never managed to sit through an entire baseball game in your life, Michael Lewis's Moneyball will make you care about the art of the game. Everyone loves a good underdogs-overcoming-grave-obstacles story, and this is definitely one for the record books. Focusing on the fiscally disadvantaged Oakland A's, this book explains the economics of baseball in a way that even I (someone decidedly not interested in the economics of baseball) was utterly fascinated by.

When teacher and writer Azar Nafisi hosted a reading group in her house dedicated to the classics of Western literature, she did so in direct defiance of the national book bans imposed by the government of the Islamic Republic of Iran. The women in Nafisi’s book club risked imprisonment every week for over two years, simply by reading the works of authors like Jane Austen, Henry James, and F. Scott Fitzgerald. Talk about having a love of literature.

As the best-selling true crime book in the history of English literature, Helter Skelter explores the trials of Charles Manson, Susan Atkins, Patricia Krenwinkel, and other members of the Manson Family cult for the 1969 murders of actress Sharon Tate, business-owners Leno and Rosemary LaBianca, and others. This utterly bizarre, totally creepy, and super disturbing story is also the brief period Joan Didion credits with ending the peace and love-filled 1960s in America forever. Don't read it home alone, or around bedtime.

A Cool and Lonely Courage by Susan Ottaway

What are the odds of having two government spies in the same family? (I'm betting fairly slim...) But sisters Eileen and Jacqueline Nearne were just that, working for the British intelligence in Nazi-occupied France during World War II, and sending coded messages for the Allied Forces. Their harrowing journeys are tales of courage, resilience, endurance and sacrifice.

In Cold Blood by Truman Capote

When four members of the Clutter family are murdered in their home, Truman Capote hit the road for the small farming community of Holcomb, Kansas to tell the Clutter's story. The result is a nonfiction book so compelling you'll feel guilty about the fact that it's true. Alternating between stories of the Clutters, interviews with members of the Holcomb community, and narratives from the killers themselves, you never knew Kansas had so many stories to tell.