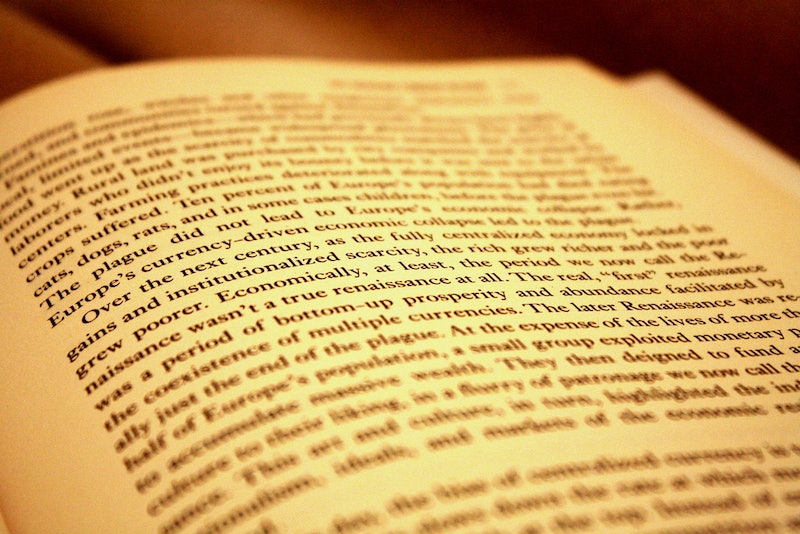 Near the end of my sophomore year of high school, circa 2003, I was wishing away the last 15 minutes of forced computer research time (“Googling” something was hardly ubiquitous back then, and computers irked me). The then-makeshift computer lab was crowded in between rows of shelves in the school library, and in the midst of my sullen daydreaming I became distracted by a thick, purple book with an irresistibly odd name: The Electric Kool-Aid Acid Test by Tom Wolfe. Excerpted on the back of its psychedelic cover was the quote: “I'd rather be a lightning rod than a seismograph.” I was an antsy 15-year-old, and I wanted to be a lightning rod, too! I was sold.

I suppose I had read some nonfiction books before — lots of children’s books about historical figures, and I think most of us girls went through a post-Leo Titanic history phase around our tweens. But I had never read anything quite like the outrageous celebration of fact that is Tom Wolfe’s writing. I was a quick nonfiction convert.

The frenetic energy of Wolfe’s storytelling led me to seek out all the other new journalists — those nonfiction writers who were breaking the rules of journalism by including themselves in the story, and using the literary artistry of fiction to tell it. I devoured Joan Didion and Hunter S. Thompson, Gay Talese, and Norman Mailer. I progressed to their modern contemporaries — women and men who wrote about topics as diverse and unexpectedly fascinating as black market florists in the Florida Everglades, the Russian mafia, public education on south side Chicago, and correctional officers in high security prisons. Mine was a world made new by memoir and biography, investigative journalism and longform essay. And, every once in a while, some true crime for good measure.

Truth Is Stranger than Fiction

Now, don't get me wrong, I love me some fiction. But nothing beats the absolute, unbelievable weirdness that is simply told truth. Just dive into Helter Skelter , the self-proclaimed true story of the Manson murders; explore criminal orchid trading with Susan Orlean in The Orchid Thief , or travel to 12 communist nations with bourgeoning journalist Stephanie Elizondo Griest in Around the Bloc , and you'll totally see what I mean.

Nonfiction Digs Way Past the Headlines

One of my favorite things about nonfiction is when a writer really goes for it: be it memoir or reportage, in my mind there's nothing better than a nonfiction writer who throws their full weight into a story — and takes readers along with them. Like Truman Capote, who spent six years traveling to Holcomb, Kansas while writing In Cold Blood , or Ted Conover, who labored alongside migrant workers in California for Coyotes . And of course, who can forget that scene in Gilmore Girls, when Logan gives Rory the ultimate journalistic pep-talk: "Hunter Thompson lived with the Hell’s Angels. Got in the muck, didn’t just orbit around it, and it drove his writing. He put you in those bikers' parties. He put you in those biker’s heads." Ah, goosebumps.

Fact Writing Requires Just as Much Art as Fiction Writing

It definitely takes some skillful literary gymnastics to write cold, hard, facts in a way that will keep readers turning pages. But truly great nonfiction writers know how to use all the tricks that the best fiction writers have up their sleeves... or, in their pen cups. Don't believe me? Check out some of these beautifully written memoirs. Or, you know, maybe some of these visually stunning works of graphic nonfiction.

One Nonfiction Book Usually Leads to Another

In Janet Groth's memoir The Receptionist , which tells the story of her job at The New Yorker, she mentions a fellow called Sam the Sandwich Man, who was unable to peddle his cart of sandwiches through The New Yorker offices after the building modernized their security system. This was one, maybe two sentences in the whole book, but I HAD TO KNOW WHAT HAPPENED TO SAM. And all of his sandwiches. This led me to a collection of essays about odd jobs that no longer exist today, which let me to a book about a bowling alley pinsetter, which led me to... well, you get the idea.

Nonfiction Books Have "Characters," Too — and They're Just As Interesting As Fictional Ones

One of the things I love most about nonfiction is that when I'm finished with a book, I don't have to go through that awful, book-breakup with characters, like I do when I read fiction. I can just head to the bookstore and pick up another book about them. Or, you know, stalk them on Twitter. (Unless they're Henry VIII or something, in which case you should probably stick to books.) Plus, the best difference between a fictional character and, say, a real person, is that you run the express possibility of meeting your favorite nonfiction book "character" on the street sometime. Now, don't you wish you could say that about Hermione Granger?

You Can Learn a Surprising Number of New Talents from Books

Lets be honest: How many of you mastered the culinary monster that is the turducken after reading Julie Powell's Julie and Julia ?

True Stories Can Inspire You to Action

Raise your hand if you've heard of this cool new project, Eat Pray Love Made Me Do It. Well what have you been waiting for? Nothing makes me more ready to carpe diem quite like reading about someone else who has. Sure, fictional heroes are great, but there's just something about hearing a really sad/beautiful/empowering/dramatic true-life story that makes me want to stand up and yell "RAWR!" and then run off and do great things in the world. You feel me?