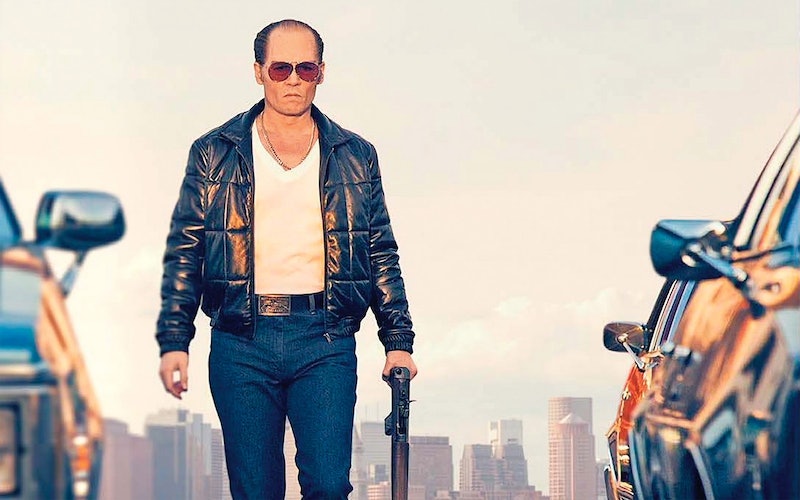 Johnny Depp's starring role as legendary Boston gangster James "Whitey Bulger" in the film Black Mass has critics praising the actor for his most restrained and realistic performance in years. But his is technically not the first big-screen portrayal of the career criminal. Frank Costello, Jack Nicholson's character in the 2006 Martin Scorcese movie The Departed, is loosely based on Bulger and his iron grip on most illegal activities happening in his home city. Those who've seen that performance will agree that the human source for even a fraction of that character's depravity must be a terrifying individual. Still, The Departed isn't a biopic. Black Mass is; most main characters retain the names of their real life counterparts. So, how accurate is Black Mass to the true story of Whitey Bulger?

Black Mass comes to movie theaters via a screenplay adapted from a work of non-fiction. Black Mass, Whitey Bulger, The FBI, And A Devil's Deal was originally published in 2001 when Bulger was still on the run (with the requisite movie tie-in version hitting shelves this summer) and is co-written by former reporters for the Boston Globe, Dick Lehr and Gerard O'Neill. Lehr and O'Neill did not adapt their own book for the screen; Mark Mallouk (an executive producer on Everest) and Jez Butterworth (Edge Of Tomorrow) took on those duties. But the book's authors did serve as consultants to director Scott Cooper. They spoke with Boston.com about their experience seeing their labor of extraordinary research become what O'Neill describes as a "dead on" cinematic account, and that they seem satisfied with the changes inherent in any kind of adaptation.

"This is a story that covers 20-something years," Lehr said. "The movie is two hours. It has to be different. What matters is the essence and the soul of the story."

However, the consultants did chime in with their expertise in the subject when they felt that accuracy was essential to a scene. Lehr described one instance that lost an actor his day off:

One time, when they were shooting the scene where Whitey chokes and strangles [Deborah] Hussey to death, Whitey was there but Kevin Weeks wasn’t. When I told them Weeks was there [during the actual event], they stopped so Jesse Plemons [who plays Kevin Weeks], who wasn’t on the set...they delayed shooting until he could come.

While most of the ensemble characters are plucked right out of Whitey Bulger's history, Kevin Bacon's FBI boss Charles McGuire is an amalgamation of several law enforcement types. Obviously, a case of this breadth and magnitude would touch the lives of countless agents. Paring down characters like this keeps audiences engaged in the story and protects them from confusion.

It's highly doubtful that we'll ever get his take on it, but it can be assumed that Whitey Bulger himself would not be thrilled with the movie's version of the truth. Now serving two consecutive life sentences in a high-security Florida prison, Bulger maintains that he was never an informant to the FBI. Being that the organized crime boss's understanding with the feds is the main crux of Black Mass, that's a pretty monumental departure.

One thing's for sure: Depp is still the unbeatable master of disguise, and his physical transformation into Bulger will definitely add to Black Mass and its credibility.

More like this
The 'Spiderhead' Movie Ending Is Nothing Like The Short Story It’s Based On
By Morgan Leigh Davies
What Colonel Tom Parker Was Really Like
By Morgan Leigh Davies
Taylor Swift's “Carolina” Theme For 'Where The Crawdads Sing' Soundtrack Is Here
By Jake Viswanath
What Is Elvis Presley’s Net Worth? How The King Earned & Spent His Fortune
By Grace Wehniainen
Get Even More From Bustle — Sign Up For The Newsletter