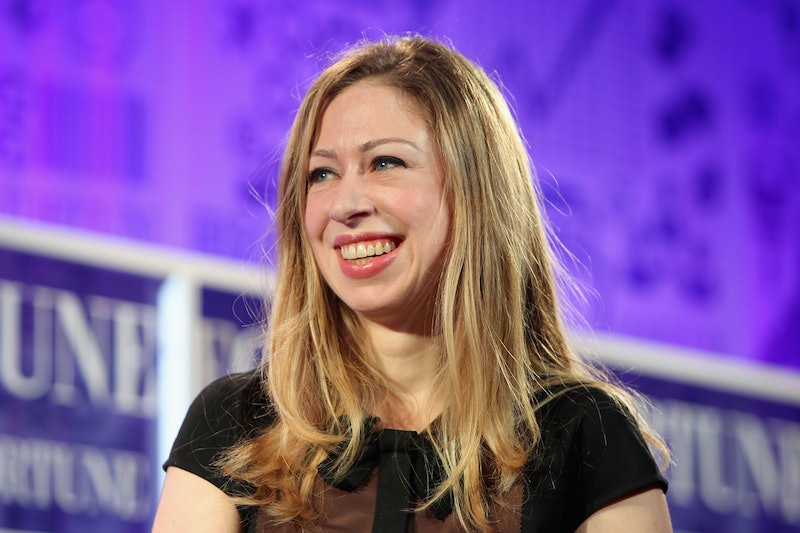 To celebrate the release of Chelsea Clinton’s brilliant new book for children, which aims to educate young people about the issues in the world they can get involved with, I’ve been looking up some of the best Chelsea Clinton quotes on feminism to get you feeling inspired. The new book, It’s Your World , breaks down issues like poverty, diseases, climate change, and access to education to make them digestible for children — and the problem of gender inequality is weaved through every section. That’s how important feminism is to Clinton — and so it’s no wonder she has so many great things to say.

With the feminist Hillary Clinton for a mother, it’s no surprise that Chelsea can speak so passionately and eloquently on gender equality, and has such a great understanding of how it links to almost every other issue we deal with. And she’s not just all talk, either; in It’s Your World, Chelsea has included masses of resources to encourage children to get going, and be our next generation of political activists. She’s even launching a website to go with it, which will continue to highlight worthwhile organizations for young people. Another Clinton for president in 2020, perhaps?

So, to showcase just how engaged she really is, here are five of Chelsea Clinton’s most feminist quotes.

On Feminism and Poverty

I talk a lot about poverty or access to clean water throughout the book, or what it means to be a girl, because all of those are interconnected to one another ... It’s important that kids understand those connections so that they ... recognize that if they’re helping more people have access to clean water, that means a woman or a girl won’t have to walk hours every day just to have water. That’s time she can spend getting an education for herself to have different dreams and a different life than what her mother could have ever imagined. Maybe not everyone thinks clean water is feminism, but it is. If feminism is really the belief that girls and women should have equal rights and equal opportunities to our brothers and fathers and sons, then we have to think about that holistically.

As Clinton explained to Bustle in an interview in September, feminism is an important part of almost every issue we come up against.

On Feminism At School

I remember ... being in 1st grade and this little boy bullying me, and the teachers just being like, “He’s just being a boy. You can’t expect to be treated differently. Boys are just going to be boys.” Which, of course, is so outlandish — I should be OK in being expected to be treated with respect … I’m so grateful that I had my mom, because on the way home from that PTA meeting where I was told “Boys will be boys,” and I said, “Mom, that sounds crazy to me,” she said, “Yes, you’re absolutely right, you deserve to be treated with the same respect as any boy, whether that’s by the boys themselves or with the teachers."

Oh, Hillary, always dishing out the great advice. Chelsea is so right on this, too; if 6-year-old boys are told it's OK to just "be boys" and disrespect other girls, they'll never grow up with a proper understanding of equality.

On Feminism and Leadership Positions

Chelsea totally understands the importance of equal representation, and she explained it perfectly to Alex Wagner at MSNBC.

On Feminism and Dress Codes

Sometimes, something that might seem small like a dress code policy is actually one of the ceilings that we know girls face even if they’re not in class. If they’re continually told that what’s most important about them is what they’re wearing or not wearing to school, what does that do to their self-confidence? What does that do to how they define their own dreams and their own worth and value?

This year, it's seemed like there's been a new dress code controversy every day, and schools just don't seem to be getting the point. Maybe the headteachers need to listen to Chelsea's MTV interview, where she summed up exactly what the problem is with telling girls what not to wear at school.

Sometimes it's the most simple statements that can be the most powerful. In a climate where public figures are often trying to shake off the feminist label for fear of being attacked, it's wonderfully refreshing to hear Chelsea Clinton proudly declare:

Of course I’m a feminist.