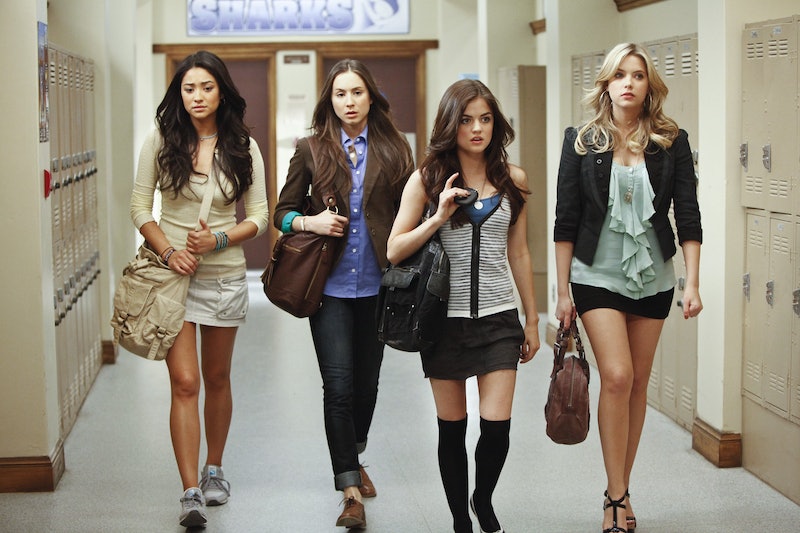 For the most part, I've never really been into teen-centered TV. Sure, I love The O.C. and can quote Buffy for days, but I never got into Boy Meets World, Saved by the Bell, or pretty much anything offered on ABC Family. I've always thought teen TV was silly fluff that couldn't hold a candle to the "serious" world of adult-aimed TV. But then, last week, I started watching Pretty Little Liars for the first time. And since then, everything has changed.

My conversion to PLL happened slowly, and not without resistance. Many of my friends had watched the show religiously for years, and I'd heard enough about it to know that I was definitely not interested; why would I want to watch a group of high schoolers get into fights and freak out over text messages when I could, well, not? But during the last year or so, it seemed that more people than ever were obsessing over the show, and it became hard to not pay attention whenever someone brought up "Big A" or something called a "Haleb" (don't judge, OK?). And once the controversial finale happened, everyone was talking about it — and finally, it just became too hard to resist.

So, last week, I decided to start watching. The premiere didn't hook me off the bat; I liked it, but it felt a bit too contrived to catch my interest. But hey, it's a pilot; even the best shows can have weak openings. So I pressed next on Episode 2. And then 3. And then 4. And then suddenly, it was three days later, and I had watched 17 episodes of Pretty Little Liars Season 1.

Because how could I not?! As I quickly learned, the show is pretty much the craziest, silliest, and most addicting thing on the planet. I had to know what happened with Aria and Ezra, and if Toby was really guilty, and whether or not it was possible for Hanna to recover from a broken leg in approximately two days (it was). PLL may not be the smartest or the most mature show on my current line-up, but it's by far the most fun.

It probably helps that I've come into it with a bit of knowledge about what to expect and who to root for, thanks to my PLL-loving friends and job in entertainment; a girl can only hear "ugh, Mona" so many times before it sinks in. Because of that info, watching PLL for the first time has been full of suspense and intrigue, and I can't wait to spend the next 2043485 hours of my life finding out what happens next. For now, 27 thoughts I've had while watching Season 1 for the very first time.

I don't know how, or in what ways, but Mona is definitely the worst. She's mean and catty and totally jealous of Hannah's gang, which could definitely be motivation for her to be "A" or at least have some connection to him/her. Or maybe she's just an awful teenager. Both options are possible.

I have very complicated feelings about Ezra and Aria. On one hand, they should not be happening; she may look old, but she is 16, and he is her teacher, and that is not OK. But on the other hand, they are super cute and only ever innocently make out (so far) and I love me some awkward classroom tension. Can't wait for parent-teacher conferences next episode!

3. I Finally Get What "Haleb" Means

Ezria I got immediately. But Haleb? I'd heard that term thrown around, but had no idea what it meant or who it referred to. Now, though, that we've met Caleb and he just moved into Hanna's house, I get it – and I like it.

4. Alison Was The Absolute Worst

I hate to speak ill of the dead (or maybe only possibly dead? I vaguely remember my friends mentioning something in that regard...), but Ali was the worst. She was mean to everyone, incredibly selfish, and basically just a horrible friend. She taught Hanna how to be bulimic! She called Lucas "hermie!" This girl did not deserve all the kind tributes up in her honor.

TV is always bad when it comes to casting "real" teens. But seriously, PLL? There is no way I'm expected to believe that these girls are 16. When I was that age, people I knew still had braces and shopped in the Juniors section.

My favorite PLL discovery so far is that despite the actors in the main cast all being in their 20s when the show began, the girl who plays Alison was 13 when the show began. In other words, she, a pre-teen, played a teenager opposite actresses who'd left that part of their lives nearly a decade before. It's incredible.

There's no better TV soap trope than the selfish, boozed-up, overtly sexual mom who embarrasses her teenage daughter while becoming a fan favorite among viewers for her crazy antics. The O.C. gave us Julie Cooper, and PLL gives us Ashley Marin. It's a blessing.

8. Seriously, They Sent Maya Away For Smoking Weed?

Aren't Maya's parents supposedly really chill and okay with her being gay and all? It seems unlikely that they'd send her to what's basically a religious work camp just because Emily's mom found a joint in Maya's Altoids case. Something seems fishy here.

9. Some Of These Parents Should Probably Talk To Their Children

Not trying to ruin Aria and Spencer's good times, but their parents should probably talk to them about the fact that they're basically exclusively dating guys over the age of 25.

10. Those School Outfits Are Not Normal

When I was in high school, a "nice" day was when I wore my jeans with Uggs instead of Converse. Suffice to say, the girls' everyday outfits of dresses, fishnets, and complicated hairpieces are not typical.

11. Lucas Is A Friendzoned Nightmare

Hannah was completely nice and a genuinely good friend to him, and yet when she told him, gently, that she wasn't interested in a romantic relationship, he totally flipped out and was all, "Girls suck they're all evil why does no one like me I'm the greatest!!" OK then, Lucas.

12. Actually, Pretty Much All The Guys Are Terrible

Ezra dates a high schooler. Toby might've killed someone. Ian is genuinely evil. Sean is horrible and judgmental. Noel blackmailed Aria. Honestly, the only good guy so far on this show is Caleb, and he's like, the creepiest person ever. The show sets a low bar for its men.

13. School Dances Are Never That Cool

Listen, when I was a teenager, a school dance meant you showed up an hour late, took a few photos, ate some hors d'oeuvres and left to hang out at someone's house because school dances are lame. Yet on PLL, it's not uncommon for students to come in ballgowns, dance to a live band, and leave with major swag. TV, man.

The more I think about it, it's obvious. She's jealous and out to get them.

She may hate everyone and want to make their lives miserable, but her hair game is on point.

18. How Are They Gonna Keep Them Looking The Same For Six Seasons?

Bianca Lawson aside, there is no amount of makeup that can make near-30-year-olds look 16.

19. They Really Should Just Tell The Police

OK, maybe not the Rosewood police — they're incompetent. But some police, somewhere? This seems like a lot of pressure on a couple of 16-year-olds.

A group of high schoolers have to hide major secrets from everyone, have oblivious parents, get in trouble at school, and live in a weird town where people randomly disappear and no one cares. Yup, it's Buffy. There's even the same theory going around!

I was a high school junior once. The only things you have time for during the week are studying for the SATs and balancing 384739 extracurriculars with piles of AP homework so colleges will like you. I did not have time for spontaneous sleepovers and art shows in Philadelphia, let alone waking up an hour before I needed to to make pancakes and hang out with my friends.

22. It's So Cute That They All Use Flip Phones

23. Why Does Everyone Sign Their Names On Their Texts?

Yes, it makes it easier for us TV viewers to know who's talking to who, but in reality, friends have each other's numbers and do not need to sign their messages each time.

24. Aria's Brother Is Totally The Chris Brody Of PLL

Just as Mona is Miranda Cosgrove's twin. Someone needs to point these things out.

26. No One Asks Aria About Iceland

Girl was in Europe for a year. Are they all just gonna pretend that never happened?

27. None Of This Matters Because I'm Gonna Watch The Whole Thing, Aren't I?

Want more Pretty Little Liars? Check out Bustle's podcast Taking This One To The Grave below.