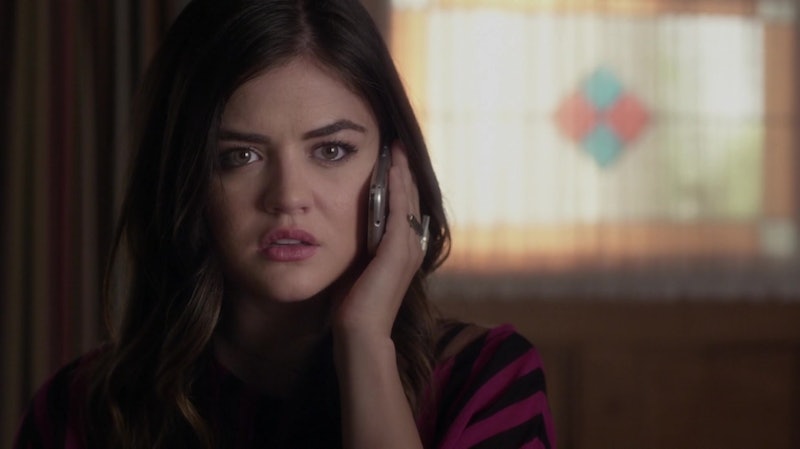 Pretty Little Liars fans root for the girls of Rosewood: we wouldn't be nearly as addicted to the drama if it weren't for Aria, Spencer, Hanna, and Emily guiding us through it. But while fans may be emotionally invest in the lives of the ladies of Rosewood, there is one beloved character that fans don't necessarily trust. Lots of fans suspected Aria of being Big A herself, and even though Cece was revealed as the person behind the hoodie, that hasn't stopped fans from suspecting Aria of being the ultimate Big Bad. In fact, two Pretty Little Liars fans just came up with a new theory that would totally validate anyone who thought that Aria was in cahoots with the show's villains this entire time.

Pretty Little Liars fans come up with pretty insane theories, and this one is straight out of a Hitchcock film. Fans Kristin Weiss and Ashley Payne wrote a theory together on the Facebook page "Pretty Little Puppet Masters," and the origins of this theory go all the way back to the Season 2 Pretty Little Liars Halloween episode "The First Secret." Remember that blonde girl who murdered her twin sister? Well, According to Weiss and Payne's theory, that little girl grew up to be Aria — who is creating all of the events of the show in her mind as a patient in Radley!

As some of you may remember, Aria's uncle Scott had mental issues, and in this theory, Scott is the father of Wren, who has inherited some of Scott's own problems. The theory states that Aria's one true love Ezra is working with her cousin Wren as the Uber A team as a part of a seriously messed up intellectual game — a game which the Uber A team eventually wins. Yikes!

But not so fast: in Weiss and Payne's theory, none of that was true at all. Instead, all of the stuff that went down on PLL was written in a book by the show's very own Aria, a patient in Radley. Why was she there? Because it was Aria who killed her twin sister and was sent to Radley for it.

This isn't the first theory to suggest that perhaps some of the craziness of Pretty Little Liars is inside the brains of one or more of the Liars. In fact, the podcast Bros Watch PLL Too suggested that perhaps Emily and Hanna don't exist at all and that they're just figments of Spencer and Aria's imagination. Where are Spencer and Aria? You guessed it: Radley Sanitarium.

Could all of this be true? While I adore fan theories like this as part of an "alternate reality" of what Pretty Little Liars could be (and it wouldn't be the first time a TV show had imagined its lead in a mental hospital — Buffy , anyone?), I'm not sure that the show would ever go to that dark of a place. Then again, I didn't think that the show would go the incest route with Jason and Cece either, so pretty much everything is fair game at this point. While I think that the eventual resolution of the series will be more grounded in reality (or at least as close to it as Pretty Little Liars can get) these ideas are way too fun not to think about.

Want more Pretty Little Liars? Check out Bustle's podcast Taking This One To The Grave below!