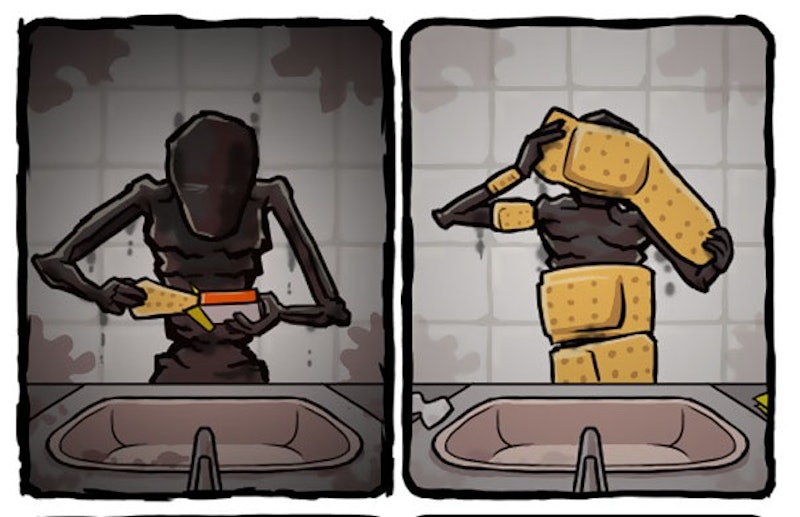 Although depression affects millions of people every year, it's often difficult for someone with the illness to describe what daily life is like to someone without it. The depression comics from Optipess, though — a name which is a portmanteau of "optimism" and "pessimism" — provide a pretty darn close approximation. The webcomic series, drawn by Norwegian artist Kristian Nygård, covers a whole range of topics on a regular basis, but its depiction of depression has struck a chord with readers around the world — including yours truly.

One of the running themes in the comics is a dark, wispy inner self Nygård calls the "charcoal being," which characters constantly strive to hide using anything from person suits to emotional band-aids. "I think the 'charcoal' beings and the person suits came to me when I was feeling especially disillusioned and dissatisfied about myself, and how we all might just be collectively faking it to get by," Nygård tells Bustle over email. "I then found it really comforting and amusing to think we're all going through the same thing."

Humor is another frequent theme in his comics; part of their appeal lies in the cleverness with which Nygård approaches depression. Whether it manifests in references to The Godfather or squat, hairy Depression Fairies in tattered tutus, Optipess manages to maintain a sense of levity despite the difficult subject matter.

Take, for instance, my personal favorite comic, in which a charcoal being is forced to put on a literal happy face before it goes out in public. Nygård points out that although the image resolution makes it hard to see properly, the butterflies in the last panel have "creepy smiles and zippers on their backs," just like everyone else.

"I firmly believe even the darkest subjects have some humor to them and I try to find the amusing and preposterous aspects of most things, even the looming threats of depression, suicide and the dark lord Cthulhu. (That last one might be fictional)," he writes.

"My comics are usually about whatever that's on my mind lately, and these particular darker feelings are sometimes especially hard to shake and end up fighting their way into the resulting cartoon despite my resistance... At first I was a bit wary about doing comics about these subjects but the response was usually very positive, which sometimes inspired me to delve even further down into the abyss," he continues.

The comics may be clever, but Nygård also states that they're "easily [his] most personal comics." However, that honesty is exactly what makes them stand out.

"I've come to realize that if I succeed in sharing something genuine — presented in a true and honest way — it will inevitably resonate with someone, somewhere," he writes. "Bonus points if it happens to be funny as well!"

Check out more of the comics below, and head over to the Optipess website and Facebook page to see more of Nygård's work.