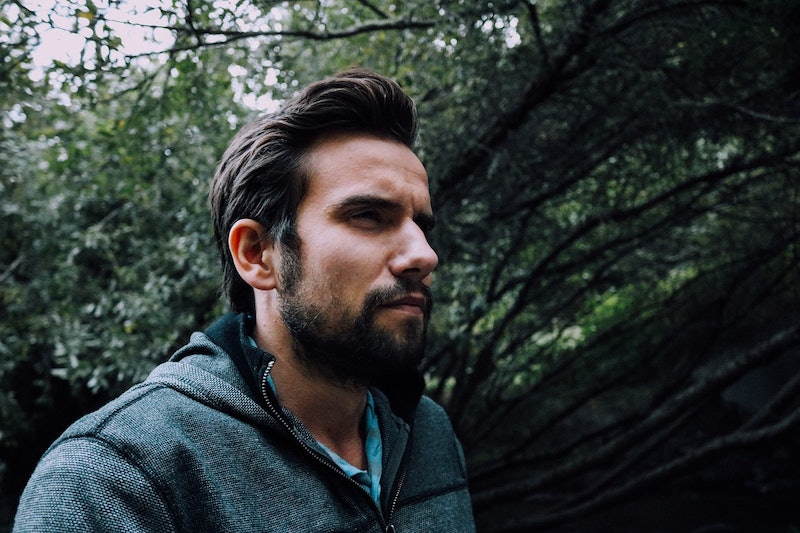 It's hard to separate the wheat from the chaff, if you will, when you're giving online dating a go. In my experience, finding a good guy on a dating app is hard— a bit of a needle in a haystack situation. I sourced outside help in the quest of tracking down a nice dude online, and I found just the right person for the job: dating, relationship and lifestyle expert Steven Ward. He and his matchmaker mom created Love Lab, a new app designed to take the misrepresentation out of the online dating equation; he is also CEO of Master Matchmakers, a high-end dating service.

Though there's no fool-proof way to steer clear of misogynists, players, and lowlifes while dating online, there are some giveaways that the guy whose profile you're peeping is a normal person — and maybe even a nice guy. These giveaways do not include terrible shirtless pics, insane rants about nothing and photos of a dude surrounded by, like, Cristal, scantily-clad ladies and a few Bengal tigers. There's no way of guaranteeing that you'll avoid the worst of what dating apps have to offer, but there are a few things that are the opposite of red flags — green flags? — to keep in mind as you swipe your way through the dating pool.

1. He Mentions Other People

This is a good one, and one that definitely didn't occur to me when I was dating online. "When a man talks about family, friends, civic, social or philanthropic endeavors, he isn’t totally self-centered," says Ward. "Be wary of the man who only talks about himself."

It's so easy to do just that in a dating profile — after all, that's what they ask you to do, pretty much: What's your job? What's your sign? What's your favorite song? A man who answers these questions but also takes the time to talk about others is displaying that he doesn't care only about himself. That said, be wary if he doesn't say anything about himself — he could be deflecting his own weirdness by shouting out the ones in his life who are less weird, aka other people.

Be on the lookout for a man whose full-body shots are clear, Ward says. "You won’t be surprised by who shows up if the photo was recent." That is a bit of an if — it is, of course, possible that some guy will post snaps from 10 years ago. Stranger things have happened. But if a man mixes a full-body shot in with the pictures of him with his dog and, like, hiking the Appalachian Trail, then he's not hiding who he is, says Ward.

When scrolling through a guy's profile, be on the lookout for the ones who talk about their dreams. Does he talk more about goals than accomplishments? Though it's nice to link up with someone who has checked off a few boxes on the ol' life to-do list, look for men who talk about what they still hope to accomplish. "Ambition is attractive to any woman. Bragging is equally as unattractive," says Ward.

Literally or physically, this guy is in no way flexing in his photographs. Look for a man who isn't showing off in his pics. "Nothing screams inadequate penis size or overcompensating than posting pictures with celebrities, luxuries or very attractive people." How true this is. A quick flip through the latest dating app will immediately confirm that dudes be flexin'. Filter out those types by swiping left on these profiles.

5. He Knows How To Cobble Together A Sentence

We've all seen the profiles (and messages) that look something like, "i KNo u wanna chil with a Nice dude." No offense to those who are nodding along to that sentence, but that screams more "dud" than "nice dude" to me. "If his sentences are properly punctuated and structurally sound, he obviously cared enough to put his best foot forward," says Ward.

Search for a profile in which a man's "positivity is palpable," Ward says. If you stumble upon a Negative Nancy, try to resist the urge to reach out, even if you're nodding along with the part when he goes on a rant about 6 a.m. garbage trucks. "Many men mistakenly mention things that are unappealing to them or others," says Ward. "Your best prospects would be with a man with a more positive outlook."

There's little worse than a prepackaged first message. Instead, keep an eye out for someone who sends personalized messages, says Ward. "Generic conversations could be nothing more than a mass text." They could be — and they likely are. "When his messages are personalized, you know he’s thinking about you." That's a step in the right direction — it'll mean that a first date won't necessarily be a one-sided gabfest with you having a hard time getting a word in edgewise.

If he takes five days to write back to a short message, he's just not that into you. Look for someone who takes initiative, Ward says. "Passiveness is a sign of tepid interest or unavailability. If he is pursuing you, he’s probably a possibility." Though there's no rule that you can't reach out first — it's a good idea, according to studies — once you've done so, know that if he's interested (and actually wants to date, as opposed to just chillin' on dating apps), he won't take a week to respond.

A good guy asks good questions, Ward says. "If a man can’t converse with you or pique your curiosity, you’ll surely be bored in no time." If there's not much to respond to from his message other than answering how you are ("Good?"), there's probably no point in responding at all.

10. He Offers Info About Himself

If you're dealing with a reticent guy, head for the hills. If you've found someone who seems to want to respond to questions and provide additional info, score. "When men offer up intel, they’re usually well intentioned — if, that is, they’re being honest with you," Ward says. Since there's no way to ascertain whether that's the case, all you can do is go with your gut, go on a date — and await further clues in regard to whether this new guy is a good match.

Want more of Bustle's Sex and Relationships coverage? Check out our video on what it's like to be a bridesmaid for hire: