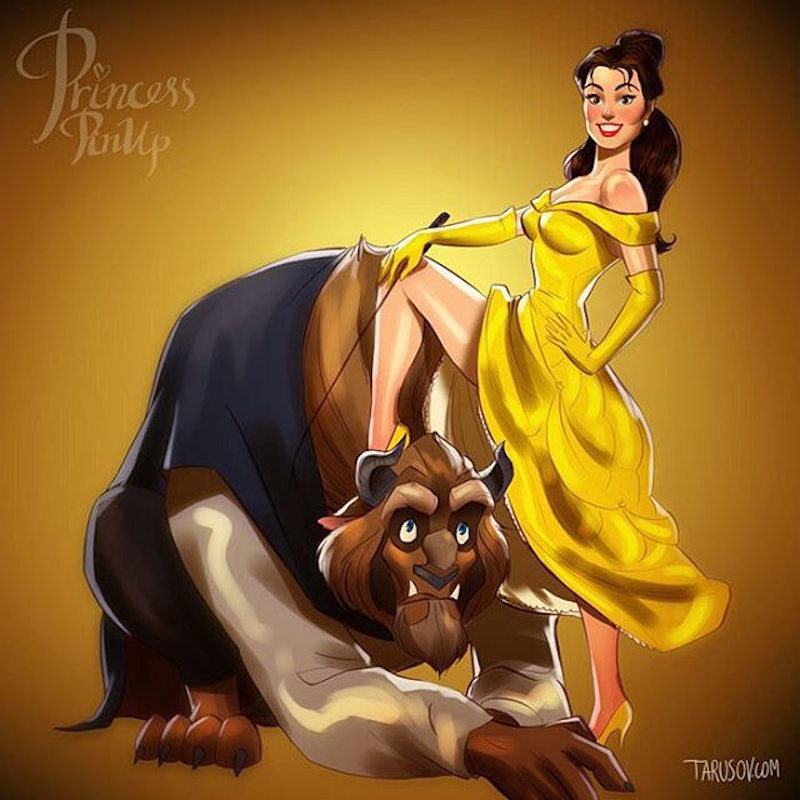 When most people think of Disney princesses, sexiness isn’t always their first descriptor — unless, of course you’re thinking of Esmerelda or Jasmine. That has completely changed, however, because one artist transformed Disney princesses into pin-up models, and it's pretty amazing. We all have artist Andrew Tarusov to thank for them!

While some of the images are a bit unsettling — why is Dopey in bed with Snow White? Why does Prince Philip have to leer at a sleeping Aurora? — that doesn’t make all of them skeevy. In fact, the thing that I love most about the images are the way that these renderings clearly don’t shy away from praising women’s bodies.

Sure, pin-up wasn’t always the most feminist form of art, but a reclamation of sorts has been happening around the art form. These aren’t the images of our childhood. They’re not the sweet, demure princesses that we '90s kids grew up with. Instead, what they are able to do is take a nostalgia-inducing image and use it to update an art that I think really glorifies the female form in a way that doesn’t always need to be predatory. While some of Tarusov’s work is less than thrilling, others are excellent updates.

This isn’t the first time that Disney’s famous ladies have gotten updates. In fact, they’ve basically been translated into all kinds of renderings. A search through Tumblr will give you loads of varying interpretations of your favorite royals. Favorites like Belle, Aurora, and Tiana have all been manipulated in one way or another. Whether it’s giving them a period stain in an attempt to criticize the absurdity of menstruation phobia or transforming them into older versions of themselves, these characters are open to artists’ interpretation, and personally, I love most of them.

Now, Andrew Tarusov has released images of both old and new Disney princesses as pin-up models, and I think many will balk at the uber sexualized images. That being said, I do think there is merit to the idea that these images are clearly not meant for parents to hang in their children’s rooms alongside that Frozen lamp. These renderings seem more to be an overt nod to the underlying sexual imagery and messages in the films themselves. Plus, let me be honest, the pin-up princesses are clearly for the adults set who — no matter how embarrassing or maybe not embarrassing, who knows? — still love a good Disney film. This love of Disney movies, which I myself have, make seeing all of these new and different rendering of characters really entertaining.

While I am more than a little unsettled by the image of Dopey in bed with Snow White and Prince Phillip leering over a sleeping Aurora because of all the questions of consent that can be raised, I overall love Tarusov’s work. Recently, pin-up photography has been reclaimed from its more oppressive roots. Shameless Photography’s work is a great example of this. Pin-ups can celebrate the bodies of all women, and while Tarusov doesn’t exactly diversify the bodies of the princesses, the images still allow for a more adult celebration of the female body.

Clearly, you shouldn’t be parading these images around to kids. However, portraying these characters in a sexual way doesn’t have to be some sort of shameful transformation. Personally, I kind of find it to be a great way to sort of flip off the purity myth often perpetuated — but subtly undermined — in Disney films. Basically, these images aren’t for everyone, but they’re an interesting spin on traditional and beloved characters. If you're interested in seeing more — no pun intended — you can check out the rest of the images over at the artist's Patreon account or his Instagram.