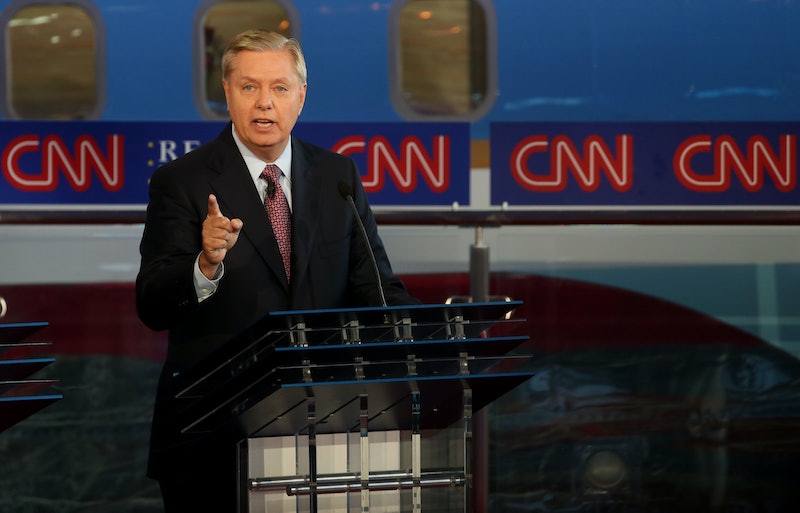 Lindsey Graham might not be the most popular candidate in the 2016 Republican pack, but at Wednesday night's primary festivities, he clearly came out on top. Dressing down the other three candidates' bloviated responses on ISIS, abortion, and healthcare, Graham easily won the GOP pre-show debate by simply being more levelheaded than everyone else. In an evening filled with fiery back-and-forth over the inaction of a stagnant Congress, Graham stood out with his clear discussion points and his willingness to actually understand how government works.

Despite multiple attacks aimed at House and Senate Republicans like Graham, the South Carolina senator didn't seem shaken, instead allowing the commentary to roll off his back.

"We're running for the [office of] President of the United States, and with that comes a certain amount of honesty," said Graham at one point, responding to rival Louisiana Gov. Bobby Jindal's accusation that Senate Republicans weren't fighting hard enough to defund Planned Parenthood. "I'm tired of telling people things they wanna hear, that I know we can't do." Graham then added that unlike the other candidates, he would not make promises to shut down the government in order to defund the nonprofit health clinics. "Trying to get the Republican Party in a position to win is what I'm trying to do," he added.

Graham easily won several heated exchanges on immigration as well, including countering a statement by Santorum that candidates needed to be focusing on "fighting for Americans," rather than worrying about the rights of illegal immigrants. "In my world, Hispanics are American," Graham chided, rolling his eyes. Despite the curtness of Graham's statement, and the senator's confusion over the terms "Hispanic" versus "Mexican," the statement stuck.