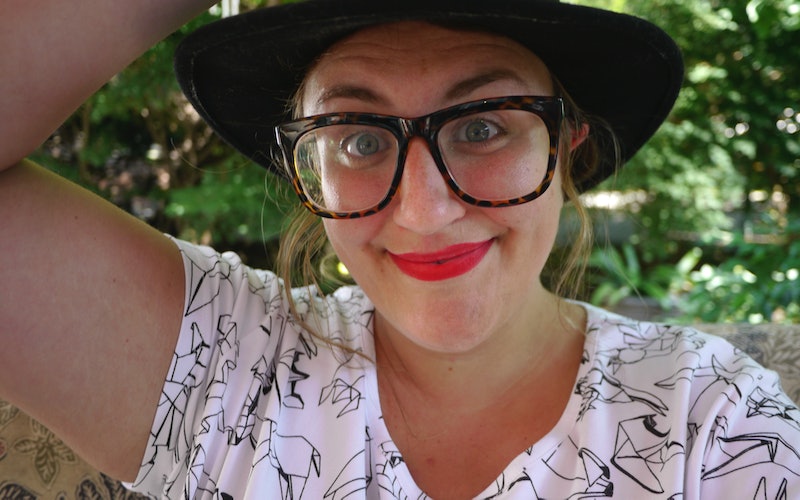 When you're a woman who has been fat since the day her body transitioned from potato sack infant to toddler on two wobbly legs, no one usually takes the time to tell you why your flaws are awesome. They sure do tell you a lot of other things, though.

When I was five years old, a school nurse once told me that I needed to go on a diet, and I'm sure doctors told my parents the same when diagnosing me as a fat kid, expressing hushed concern, and handing me a piece of candy for the road. My parents told me things, too. They said that I was fine just as I was, and that someday everyone would see it as clearly as they did. My pals at school definitely told me stuff as well — every day, all the time, without reprieve, until I'd slowly lumber home with my backpack hanging down in the cracks of my elbows in defeat, weeping 9-year-old tears and hoping the school would close for absolutely any reason.

For better or worse, all those people said all those things, but no one told me why my flaws — or what society believes to be my flaws — were actually awesome. Even my incredibly supportive parents didn't waste much time on that, preferring to think that one day my flaws simply wouldn't be there anymore. It's a completely understandable tactic. After all, isn't it common to promise a child something major is going to happen when they grow up? For fat kids, those promises come often and from all corners. Instead of telling kids why their differences are great, we tell them that someday, everyone will grow up and no longer mention them.

But that's not always the case, is it? It wasn't for me anyway. I grew up into a magnificent adult, 5'11" tall and fluctuating between 210 and 250 pounds, depending on the year, the season, my mental state, and whether or not I was living in a cheese-centric country at the time. This is coupled with the fact that I come from very large stock, so my size is almost genetically guaranteed. All the flaws, however — the ones they promised would someday vanish — did not.

Here's what it said:

As I stood there as a late 20-something reading about all of my 11-year-old flaws, I got choked up thinking about the fact that basically none of them had changed. My stomach is still fat, my hair is naturally oily, I still get breakouts, I'm still tall, my boobs are good looking but relatively modest, my nose is still my nose, and my nails are, well, kind of gross.

All of those promises about my flaws disappearing turned out to be complete and total lies. They're fabrications concocted by people who aren't cruel enough to shame you, but simply can't bring themselves to tell a melancholy and desperate young person the truth: Your flaws are your flaws, baby, and they aren't going to change.

Somehow, the fact that they don't is where their power comes from. Your flaws have been and always will be a part of you, and they're what make you awesome.

Of course, you can change some things about yourself. Doing so might feel gratifying in the moment. More often than not, though, your shitty self creeps back up on you eventually. I've lost and gained weight, been meticulous about my skin, and stopped biting my nails. However, over the years, those things ebb and flow like all things do. In the end, I'm right back where I started, flaws and all. And they don't make me any less of a powerhouse than I'd be without them.

If the idea of your flaws being unalterable doesn't sit right with you, then consider this: Everything that I listed as a flaw is a construct, arguably created by patriarchy and its systematic manipulation and subsequent condemnation of women's appearances. The shittiest parts about your body were literally made up, invented by a social structure that actively wants to keep you suffering. If your flaws can be so easily created, though, then they can also be dismantled. Unfortunately, the latter part isn't quite as breezy. Oppressing a group of people with arbitrary rules is as easy as pouring sugar into a gas tank. Removing that oppression is taking apart the engine and trying to restore it to its former glory — syrupy, unmanageable bullshit and all.