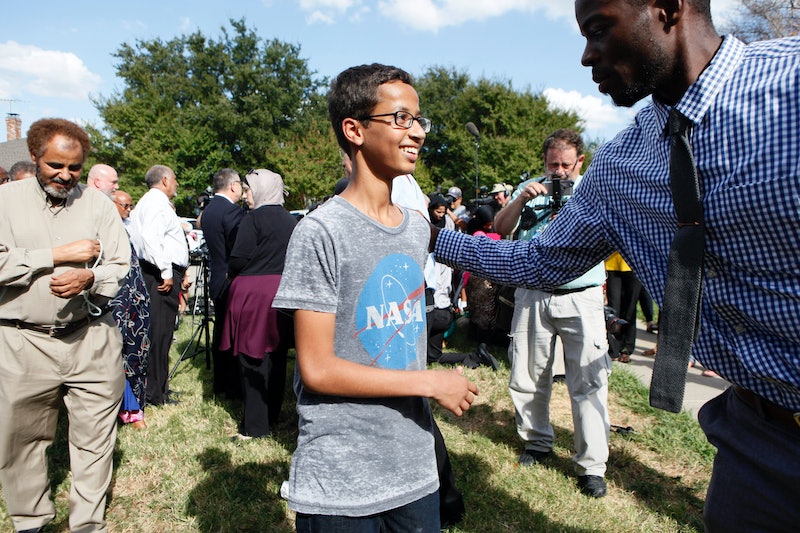 A few days after being arrested for bringing a not-bomb to school, 14-year-old Ahmed Mohamed appears to have joined Twitter (account not verified, but I'm optimistic). The hashtag #IStandWithAhmed has been trending on the site amid widespread support for the teen nerd hero. The Irving, Texas student originally came under suspicion on Monday, after bringing a homemade clock to school (badass). His English teacher decided that it was probably a bomb, because terrorism is clearly a more logical conclusion than a teenager who is actually interested in doing something productive with his free time. The clock was confiscated, and Ahmed was subsequently detained, arrested, taken to a juvenile detention center, and suspended from school. He was later released, after authorities realized that he had merely done something awesome, rather than illegal.

Twitter, as Twitter is wont to do, immediately and ceaselessly erupted both its support of Ahmed and its understandable shock (or bleak lack thereof) and outrage at what seems to many to be a painfully inarguable example of a Muslim student being unfairly targeted in a Conservative state. It's a stark example of what happens when stereotypes and fear regarding people of certain ethnic and religious backgrounds still pervade so much of American psyche. Everyone from Hillary Clinton (if she doesn't tweet in support of your cause, does it even really count at this point?) to Aziz Ansari tweeted about Ahmed, conveying sentiments that were an understandable mix of shock, outrage, and ebullient encouragement for the budding creator.

Ahmed's sister set up a Twitter account to communicate with supporters, but obviously, Ahmed couldn't endure the embarrassment of using his sister's account for too long. Ugh, gag — sisters are so gross, am I right, Ahmed? This guy knows what I'm talking about. (Please be my friend; You're so cool.)

So It was probably only a matter of time until Ahmed joined his own party, but that doesn't make it any less awesome now that's he's here.

I mean, if you're 14 and nerdy, and suddenly all the most famous people in the world (like, Obama invited him to bring the clock to the White House — that kind of famous) are talking about you, you pretty much need to get on Twitter. Plus, he's 14. I know newborns with Twitter accounts these days. Get your head in the game, Ahmed. What, like you've got something better to do than waste your time on social media like the rest of us? (Oh, right. You do.)

Welcome to Twitter, Ahmed. Come for the supportive hashtag, stay for the cat memes.