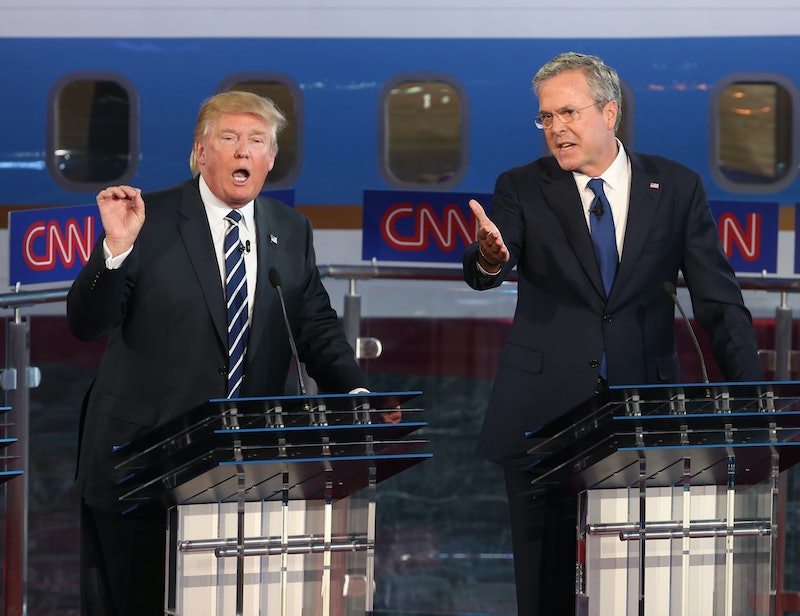 Whether being used to describe the candidates' actions or being said by the candidates themselves, "braggadocio" was the word of the GOP debate by far. All of a sudden a word that hasn't gotten much play in recent years was all of a sudden likely the most-Googled word of the night. (FYI, it means boastful, overly proud, bragging in excess.)

The word was used throughout the night, of course when Donald Trump said, "I'm Donald Trump. I wrote the Art of the Deal. And I say this not in a braggadocious way, I've made billions and billions of dollars." Right, that's totally not bragging at all. Even Carly Fiorina used it when taking a swipe at Trump as she said, "Leadership isn't about braggadocio."

But the word was most obvious when the candidates were not using the word, but their braggadocio showed when they were speaking on stage. Trump went as far as to insult Rand Paul's appearance and then call Fiorina a "beautiful woman," a comment to which she rightfully looked very unamused by. I think it's obvious that this word was most often applied to Trump, as he continued to talk mainly about himself, including a comment about a deal when he said, "If I wanted it, I would've gotten it."

Even in the mini debate earlier Wednesday evening, Lindsey Graham showed some braggadocio of his own when he consistently pushed back his allotted time to speak, saying, "Wait a second, you asked me a question!" as moderator Jake Tapper repeated "Thank you, senator," over and over again. Well, actually, the majority of candidates throughout both the mini debate and the primetime debate did this — they seemed to have gained a lot of confidence since the first round.

In more braggadocio, Fiorina bragged that she was friends with Bibi Netanyahu, as well as Steve Jobs. Mike Huckabee called the 11 candidates on the primetime stage the "A-team." Rick Santorum in the mini debate gave a boastful wink to haunt your dreams. It was never-ending.

But perhaps the biggest blowhard moment of the night that really defined Trump as the braggart king was when Trump claimed he would "take care of women." Because if that coming from a known sexist's mouth isn't braggadocious, then I don't know what is.