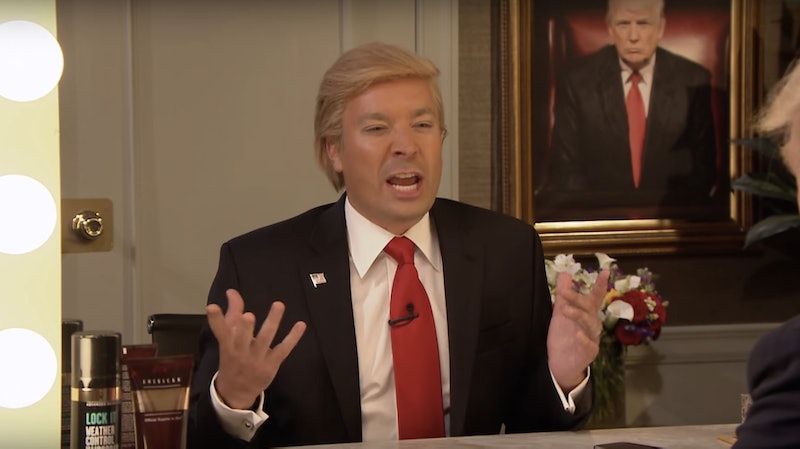 On Wednesday, Hillary Clinton made her first late-night appearance since announcing her candidacy for president, going on The Tonight Show Starring Jimmy Fallon — the same night as the GOP presidential debate. Fittingly, Fallon decided to reprise his role as GOP frontrunner Donald Trump in the opening sketch. He called up the Democratic candidate via a gold phone to interview her, arrogantly acting as if he'd won the entire debate and had only dialed Clinton to gloat. Fallon-as-Trump talked over her when she asked him not to, and even shared some hilarious campaigning tips. It's this solid impression that makes me want Jimmy Fallon as Donald Trump for president.

Fallon has assumed the role of Donald Trump before, and has even done so with the real estate mogul himself. For Trump's appearance on The Tonight Show last week, Fallon acted as the primary Donald, while the actual Republican candidate pretended to be his reflection in the mirror. The two moved in tandem beautifully. Both Trumps are overly confident, but it's Fallon's impression and boisterousness that truly make him the more captivating candidate. The real Trump would never chant "huge huge huge" when discussing his GOP debate appearance, nor would he come up with such an innovative idea as protecting the border via Jenga. Fallon-as-Trump does.

Fallon's Trump taps into the most outlandish traits of the candidate's personality, turning him into an even more engaging, entertaining force to be reckoned with. He's so confident he'll become president that he's already considering an equally controversial running mate. During the Tonight Show segment with the real Trump, Fallon suggested looking into Gary Busey as a potential VP. Trump responded:

Fallon clearly has a knack for what would make for an entertaining oval office, and I'd certainly be more inclined to vote for Trump/Busey than Trump/West. Plus, Busey's already publicly endorsed The Donald. Fake Trump is just as innovative during his segment with Clinton, especially when it came to campaign strategy. Fallon-as-Trump offered up his winning formula to generate chatter around his campaign and continue to turn heads. He joked that picking three things most people love and deciding to denounce them is the way to stay on top. "Puppies? Stupid. Rainbows? Total losers. Fall foliage? Tree puberty."

I can only imagine how much more entertaining a GOP presidential debate would've been with Fallon answering for Trump. Rather than the constant mess of candidates talking over each other and getting more and more flustered as the night dragged on, Fallon's Trump would shine with all the confidence in the world. His performance would be, in Trump's words, "Huuuuuge."