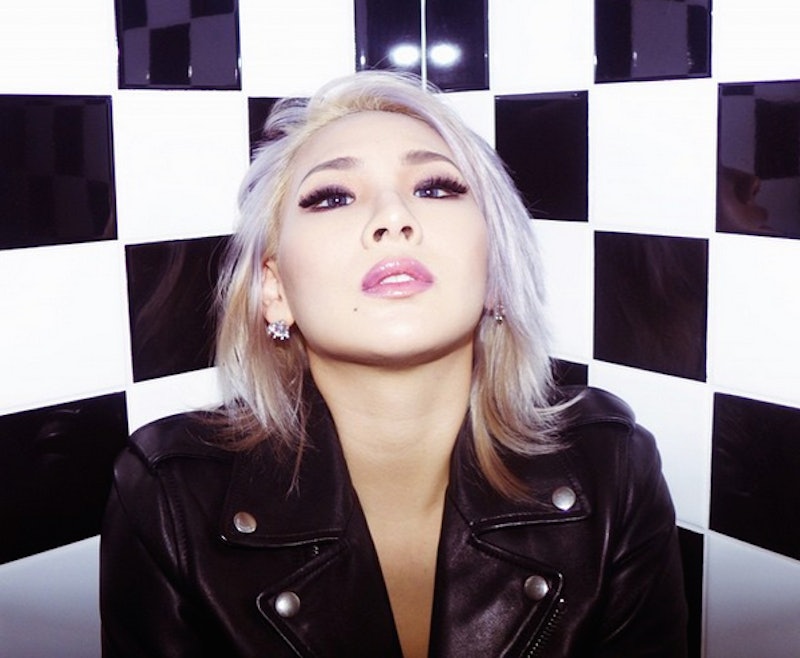 If you're already a fan of K-pop, you probably know CL as the leader of the popular K-pop group 2NE1. If the name means nothing to you, then listen up, because Chaelin Lee, better known as CL, is one of the K-stars leading the charge to bring K-pop to the United States.

Since CL released her first solo track in 2013, she's quickly started rising to the top. Her music has shifted from 2NE1's poppy sound to something more akin to Southern hip-hop. She's even teamed up with Justin Bieber's manager Scooter Braun, and has been collaborating with artists like Skrillex and Diplo on her first album. CL also spent this summer touring North America as part of Mad Decent Block Party, so clearly American domination is on her mind.

However, CL isn't just an amazing singer, rapper, and dancer. She's also a style icon in Korea, appearing on billboards and in magazines. If her music is going to cross over to mainstream America, it shouldn't come as a surprise if her sense of fashion has mass appeal, too. CL's style is best described as bold and colorful, and she's definitely not afraid to experiment. (After all, she has been described as Jeremy Scott's muse.)

So whether you love K-pop or just want to get ahead of the sartorial curve, here are seven reasons why CL should be everyone's next K-pop style icon.

1. She Knows Her Brands

CL launched her solo career in 2013 with the ostentatious video for "The Baddest Female." In this four-minute clip, her look swings from cutesy with big, blonde pigtails to tough with a black baseball jersey and an eyepatch. From a Hermès bag painted in turquoise to sneakers from Adidas, this video is chockfull of designer duds. You can spot her rocking anything from red and magenta Fendi stole to Nike high-tops on her Instagram, but her ability to mix haute couture with everyday brands is what keeps the labels from getting tiresome.

2. She Has Some Famous Fashion-Forward Friends

Perhaps CL's most notable friendship is that with Jeremy Scott, whose attention she grabbed when she wore a pair of his sneakers in her first music video. The two quickly hit it off, and Scott told Paper in an interview for the magazine's September issue, "To me, she is one of my best friends."

Scott isn't the only one of CL's famous fashion-forward friends, though (even though she was his date to this year's MTV Video Music Awards). She's also been spotted hanging out with Alexander Wang, Japanese designer Kansai Yamamoto, who is perhaps best known for his collaborations with David Bowie, Grimes, Diplo, and Skrillex. With that kind of company, it's hard not to be fabulous all of the time.

As Dazed pointed out in 2014, many of CL's outfits from the music video for "The Baddest Female" are from "young, emerging menswear designers, notably British talent Nasir Mazhar, Astrid Andersen, and Sam MC." Although she wears her fair share of gowns and skirts, CL is just as comfortable stepping out in a military jacket and sweatpants, paired with a snapback cap. Besides, what's the difference between men's and women's clothing anyway?

4. Her Makeup Is Always On Point

This is CL's makeup when she's at the dentist. When I went to get my wisdom teeth taken out, it was a miracle that I even put on pants, let alone a perfect bronze smoky eye. CL is known for her dramatic eye makeup, which she executes flawlessly. There's a reason she's the face of Maybelline New York, after all.

5. She Knows How To Accessorize

From the pearl-lined sunglasses she wore to the presentation of Chanel's 2015/16 Cruise Collection in Seoul to gold choker necklaces and chunky bracelets, CL does not shy away from accessorizing with bold, bright pieces. Somehow, her accessories never overwhelm the look. She knows when a single pair of statement sunglasses is enough and when it's time to bring out the big guns, like this handful of opulent rings.

6. She Can Rock Granny Hair

These days, CL's hair is a perfect silvery gray, a totally on-trend look that still somehow appears fresh. (Here's looking at you, granny chic!) But CL isn't one to shy away from other bold and trendy hairstyles. She's tried out mid-length lavender locks, a beachy blonde bob, and long, sleek brown hair with mod bangs. It seems like there's no such thing as a bad hair day for CL, which is a superpower I wish I possessed.

Though she has a strong sense of style and a clear vision, CL is constantly changing, trying out new looks, and pushing the boundaries of K-pop. Her ability to experiment fearlessly, both with her wardrobe and her music, especially as she steps onto a global stage, is nothing short of inspiring. CL is unapologetic for wearing what she wants, however she wants to, opening the door for other women to do the same.

So bow down to The Baddest Female, and take some style tips from CL.