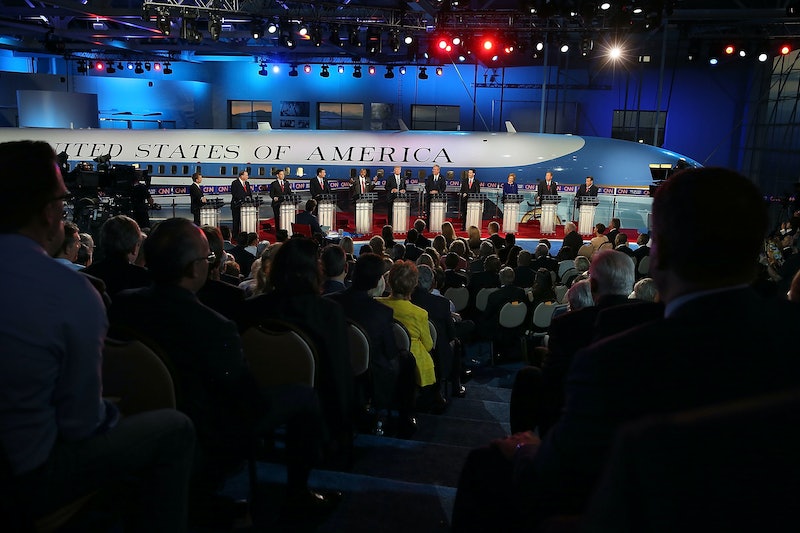 Two and a half hours into the CNN debate, I (along with the rest of America, I'd imagine) was starting to wonder how much longer it was going to run. Is Marco Rubio telling his 11th inspirational story of the night? At one point, I forgot Mike Huckabee was even there. Eventually, I forgot my own name. It's hard to imagine how the candidates themselves must have felt (Chris Christie was noticeably in pain, leaning on his podium) as the moderators kept asking what felt like endless questions. So why was the CNN GOP debate three hours long? Surely, it must have set some kind of new record.

Even before the debate began, Donald Trump, being Donald Trump, voiced his opinion on the length of the event loud and clear, tweeting: "Can you believe @CNN is "milking" it for almost 3 hours? Too long, too many people on stage!" For once, Trump had a point. Over the course of the three-hour event, the candidates visibly lost steam, and handling 11 opponents for that amount of time proved to be a more difficult task than CNN was prepared for. Moderators Jake Tapper, Dana Bash, and Hugh Hewitt could barely keep the candidates in line as they repeatedly interrupted each other and went over their allotted speaking time.

Why did CNN decide to put the candidates and viewers through such a long debate?

According to Politico, CNN hoped the extended period of time would allow each candidate to really lay out their policies and issue stances in detail, finally giving the public a fuller sense of where they differ. While the candidates did get more time to speak in the second debate, much of it was spent retorting an opponent's statements or trying to get the last word. Sometimes a third candidate would cut in because the first two had mentioned his name somewhere in their exchange, and soon nobody had any idea what the question was to begin with.

In fact, the debate was so long that CNN had to clearly state its restroom-break policy: the candidates were allowed to take one bathroom break during the third commercial break for four minutes and 30 seconds. If I had known about this beforehand, I would have been anxious for Rubio knowing he likes to stay hydrated.

So was this the longest presidential debate in history or what? Actually, yes. According to USA Today, which analyzed the transcripts of 119 presidential debates, CNN's debate saw roughly 34,000 words exchanged between the candidates, which is more than any other televised debate on record. That's almost twice the number of words spoken at the Fox News GOP debate in August, which only saw about 18,000 words.

Of course, out of those 34,000 words, Trump said the most out of any other candidate. He ended up with 18 minutes and 47 seconds of screen time. Scott Walker came in last this time with a measly seven minutes. But, honestly, three hours in, who's even keeping track anymore?