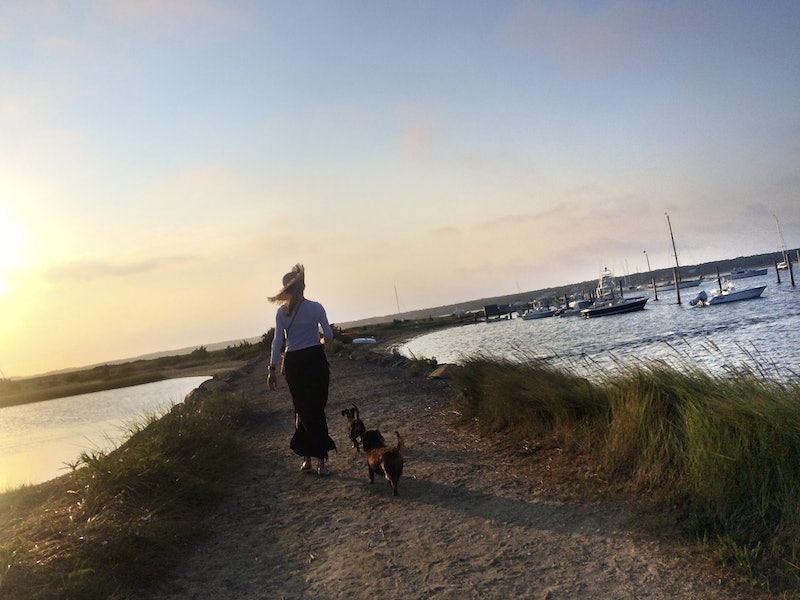 Fake fainting can be a pretty hilarious joke in the right context, but I'm guessing that you've never thought to pretend to fain in front of your dog. Well, if you can believe it, BuzzFeed reports that people seem to be picking up on this new fad — but it's probably not for the reasons you think. People are fainting in front of their dogs in order to practice personal safety, as fake fainting is actually a good way to see how your pup would react in an emergency. This has been getting a lot of attention on social media, as fake fainting in front of your dog almost seems like it's a new trend.

Many talk about how fierce and loyal their dogs are, and this is a way that you can put that to the test. Of course, there's no surefire way to tell exactly how your dog would react in an emergency, but it's definitely a fun way to see how your pooch reacts. You may actually be surprised at how many of these dogs don't seem alarmed, but hey, your dog can probably tell that you're just playing around since they presumably know you very well. Trust me though when I say that the results of those who have conducted this experiment are nothing short of LOL worthy. To see for yourself, here are four of the most hilarious:

The owner of this dog faints mid-walk, as he releases the pup's leash as he falls to the ground. The dog doesn't spring into any sort of action however, as you'll see him just standing there, looking very confused.

Well, this owner was sure in for a hilarious surprise! After "fainting" on the concrete, his dog just prances off, almost seeming happy to have escaped from the hands of it's owner.

3. The Dog That DGAF

This is such a funny dog reaction to watch, as it immediately starts to wander off into the distance, looking back at it's owner over it's shoulder ever now and then to make sure they're really down for the count. I think this a dog with a serious case of wanderlust!

4. The Dog That Just Keeps Walking

This dog might be the most hilarious of the bunch, as it just moseys on its way down the street as if nothing has happened to its owner. Maybe it was just really in the mood to talk a walk?

It seems that birds take better to this experiment than dogs do, since one person decided to try the experiment with their pet bird. The bird instantly goes into red alert and starts to call out, seemingly for help. Perhaps birds are more perceptive than we think!

To see even more dogs' reactions to their owners fainting, head on over to BuzzFeed to see the full list.