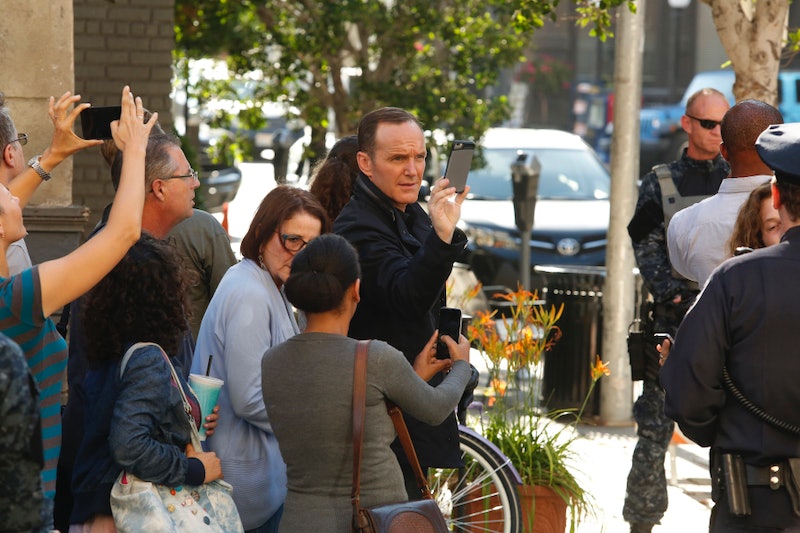 We are inching closer to new episodes of Agents of S.H.I.E.L.D. and new material is coming out every day that make this season look like the best one yet. First, there was the trailer that had it's fair share of danger, and now a new poster has been released, and it highlights all of the ways Agents of S.H.I.E.L.D. Season 3 will differ from Season 2. First, it's a much lighter image, with white and grey dominating, where red and black were last year. The new Agents of S.H.I.E.L.D. Season 3 poster also teases the seasons focal point with the tagline: are you Inhuman? For two of the people standing below the S.H.E.I.L.D. insignia the answer is yep, absolutely.

Maybe my favorite thing about this poster is the placement of Grant Ward up front, looking like a boss. When we went into Season 2, Ward was on the sidelines in almost all of the promotional material, signifying his full removal from the team and backwards allegiance. He was still in the show, but had a significantly reduced role from Season 1. It looks like he will be back in the thick of things this year, even if he's still the enemy. What can I say, a tiny part of my still ships SkyeWard, regardless of how ugly things got. But this is just the beginning of how Agents of S.H.I.E.L.D. will differ from Season 2. Proceed with caution, there be spoilers below.

Last season, he was recovering from resurrection and brain scrabbling. This year, he's dealing with getting his hand chopped off. We can clearly see that he is rocking a gloved look here; this could mean a replacement hand, or nothing at all. My guess is he will have some cool tech installed to replace it, so he's a tiny bit powered.

Or Quake, depending on if she is in the field. Season 2 saw Skye go through terrigenesis and discover her biological parents. This season, she seems to have fully embraced her new persona, and is officially aligning with the Quake from the comics.

As I mentioned, Ward's back in action, but it looks like he will be more focused this year. Less... in prison and murdering his family. Maybe this year will be that redemption arc? Possibly?

He get's a spot on the poster and everything. A later addition to Season 2, he helped train Skye and get her adjusted to her new powers. It looks like he was their first recruit for the new division of powered people.

Bobbi And Lance Are Almost Out

It was touch and go there for a while, but it looks like the non-spinoff Marvel's Most Wanted is going forward, with Adrianne Palicki‘s Bobbi Morse (Mockingbird) and Nick Blood’s Lance Hunter as leads. They were some of the best additions in Season 2, and it is going to be tough adjusting to them leaving the show again. All I ask is that we get to keep Mac. That's not so much to ask, is it?

This was set up last season, from Simmons learning to lie a bit better in her HYDRA infiltration and then trying to avenge Ward, and killing Sunil Bakshi in the process. She seems to have made it out of the alien rock, but I don't think that will help improve her darker turn.

Inhumans Are The New Black

Last year, it was the hunt for the obalisk, and the terrigent crystals. Now the search is on for the new Inhumans, and something tells me it's going to be a race to find them. I can't wait to see all the action go down next season.