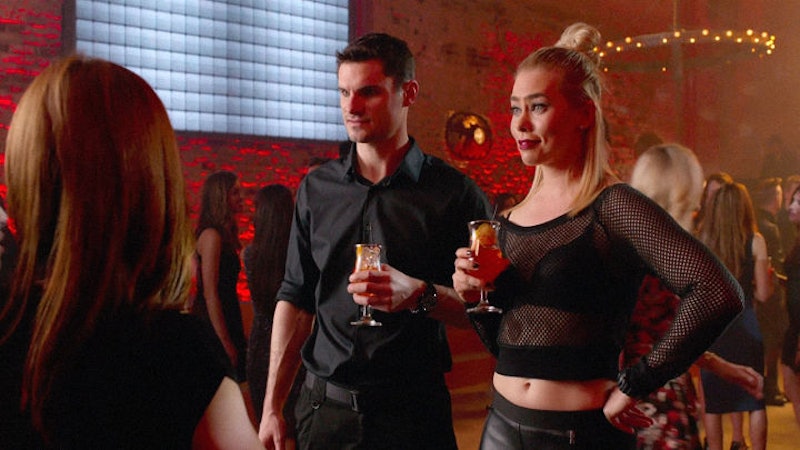 One of the best parts of Pitch Perfect 2 is, hands down, all those interactions between Barden Bella Beca (Anna Kendrick) and Das Sound Machine leader Kommissar (Birgitte Hjort Sorensen). Every time the two come into contact, the situation quickly turns hilarious; as the tall, powerful Kommissar hurls insults at Beca and her teammates, the Bella leader attempts to respond with barbs of her own — but, due to a combination of awkwardness, intimidation, and a not-so-small crush on the German singer, only ends up paying her compliments in the vein of "Your sweat smells like cinnamon." It doesn't matter how many times the scenario repeats; every interaction is funnier than the last — but according to Sorensen, there was far more to the scenes than just making viewers laugh.

"I had this idea in my mind that Kommisser was also finding Beca attractive, so I I tried to flirt with her as much as I possibly could," the actress tells Bustle. "And she [Kendrick] just totally went with it."

Working from a script by Kay Cannon but encouraged to improv, the actors had plenty of fun calling each other names and thinking up the most ridiculous insults possible, says Sorensen; she cites her character's disgust-filled "I don't speak 'loser'" as a particular moment of pride.

"Most of the film is as scripted, of course, because Kay Cannon did a brilliant job writing it," she says, "But I think the fact that Elizabeth Banks allowed us to have a take in which we [improv-ed] — every now and then, there would be a little gold moment."

Yet despite the fun atmosphere, Sorensen says that joining the set was "nerve-wracking"; she credits co-star Rebel Wilson and the rest of the "lovely" and "welcoming" cast with explaining how everything worked and preparing her for all the chaos that's bound to come on a movie full of A-list musical theater champions. Still, Sorensen and her DSM cohorts kept a bit of distance from the rest of the cast, a decision she says helped with getting into character.

"It kind of worked to our advantage that we weren’t part of the first film, because there was that sense of intruding into their world, and that’s exactly what we were supposed to do," she says.

Still, everyone enjoyed the chance to get the entire cast together, such as in the epic final scene at the World Championships. Featuring several huge a cappella performances, celebrity guest stars, and an audience of 3000 extras, the scene was bigger than any Pitch Perfect had ever done.

"Ding the world championship was just amazing," Sorensen says "It was a pure thrill from start to finish."

It was also the first time Sorensen really understood the scope of what she was getting herself into; although she had previously known about Pitch Perfect's success, she says she hadn't gotten just how huge a following it had.

"I had heard about the first film, but I hadn’t really discovered the intense fanbase around it [until the finale]," the actress says. "But then once the movie opened, it was beyond my wildest dreams."

Pitch Perfect 2, released in May and out Sept. 22 on Blu-Ray and DVD, outgrossed the profits of its predecessor in just five days; to date, it's made over $285 million, and is the highest-grossing musical comedy of all time. There's already plans for a third movie, and Kendrick, Wilson, and Brittany Snow have all signed on. There's no word yet if Sorensen and her Das Sound Machine co-stars will make an appearance, as well, but it wouldn't be a shock — the powerhouse Germans were huge fan-favorites.

"I would be happy to do it," Sorensen says, "but I have absolutely no idea [if it will happen]."

Besides, she says, "a third film would have to break with the new" — meaning that it probably wouldn't revolve around the Bardem Bellas/DSM sing-off of Pitch Perfect 2. Still, there's no doubt that fans would jump at the chance to reunite with Kommissar, Pieter Krämer (Flula Borg) and the rest of the DSM crew — if only to hear Sorensen call Kendrick's character a loser in at least eight languages once more.