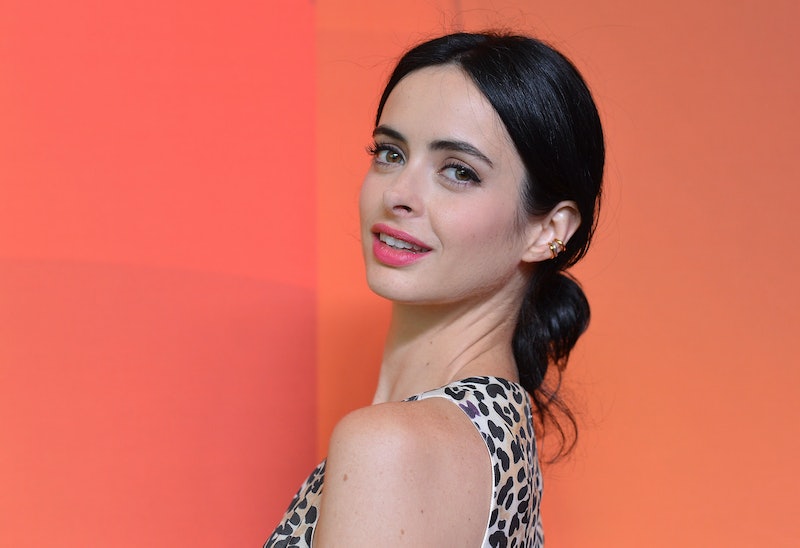 Are you ready to meet your new favorite Marvel character? Netflix released the first images from Jessica Jones , their newest Marvel project, and not only do they feature the superhero turned private investigator, but they also feature Luke Cage, who is next in line to get his own Netflix show in 2016. The always wonderful Krysten Ritter stars as Jones, who decides she can do more good as a PI than as a caped crusader. Nothing will be easy for Jessica as she faces not only bad guys, but her own personal demons. As an added bonus, one of those external bad guys is played by David Tennant, who is looking all kinds of suave as Kilgrave.

The show promises to continue in the dark vein established by Daredevil. It might even go darker given Jessica has PTSD following her superhero work and just as many vices as Matt Murdock. The photos don't reveal much, but they do give you a peak inside Jessica's day to day life. You see Jessica with her best friend Patsy (Rachael Taylor), her ally Harper (Carrie-Anne Moss), and Luke Cage (Mike Colter), whose past will be delved into when his own show rolls out.

Check out the pictures below, as well as Netflix's previously released Jessica Jones teaser.

She looks so normal, right? Netflix is doing a great job of keeping their heroes grounded so far, and Jessica looks like she will be no exception. She doesn't wear a mask, she gave up her costume, and she lives her life out in the open as she uses her powers and skills to help the people of New York City.

I am loving the BFF vibes between these two. The characters are supposed to be polar opposites, and that comes off in the way they're dressed. Jessica is all leather and hard edges, while radio host Patsy's attire is softer and her overall look more open. The friendship between these two is set to drive a good bit of the story, and they're meant to be as close as sisters.

Why hello there, Luke Cage. I am psyched to see Luke in Jessica's story, and in a major way. He's not just there to set up his own show; he and Jessica are going to be close. The way they affect each other's lives is going to be a huge deal moving forward.

The idea of seeing Tennant as a bad guy hurts my soul, but he is going to rock the role of Kilgrave. In the comics, the mind manipulating character is also known as The Purple Man, and there's a nod to his origins here if you take a peak at his scarf. There's not a lot known about Tennant's Kilgrave just yet, other than he played a role in Jessica's past — and probably not in a good way.

Finally, here is Harper (Moss), who is going to be an ally for Jessica as she tries to find justice through the traditional legal system instead of using the vigilante means superheroes resort too. Why yes, this show does seem to have an abundance of awesome ladies, I'm glad you noticed.

Now, in case you need a refresher, take a look at Netflix's Jessica Jones teaser, which drops hints about her PI agency Alias, her troubled past, and her many, many bad habits.

All 13 episodes of Jessica Jones will premiere November 20 on Netflix, so there are your Thanksgiving vacation plans made.