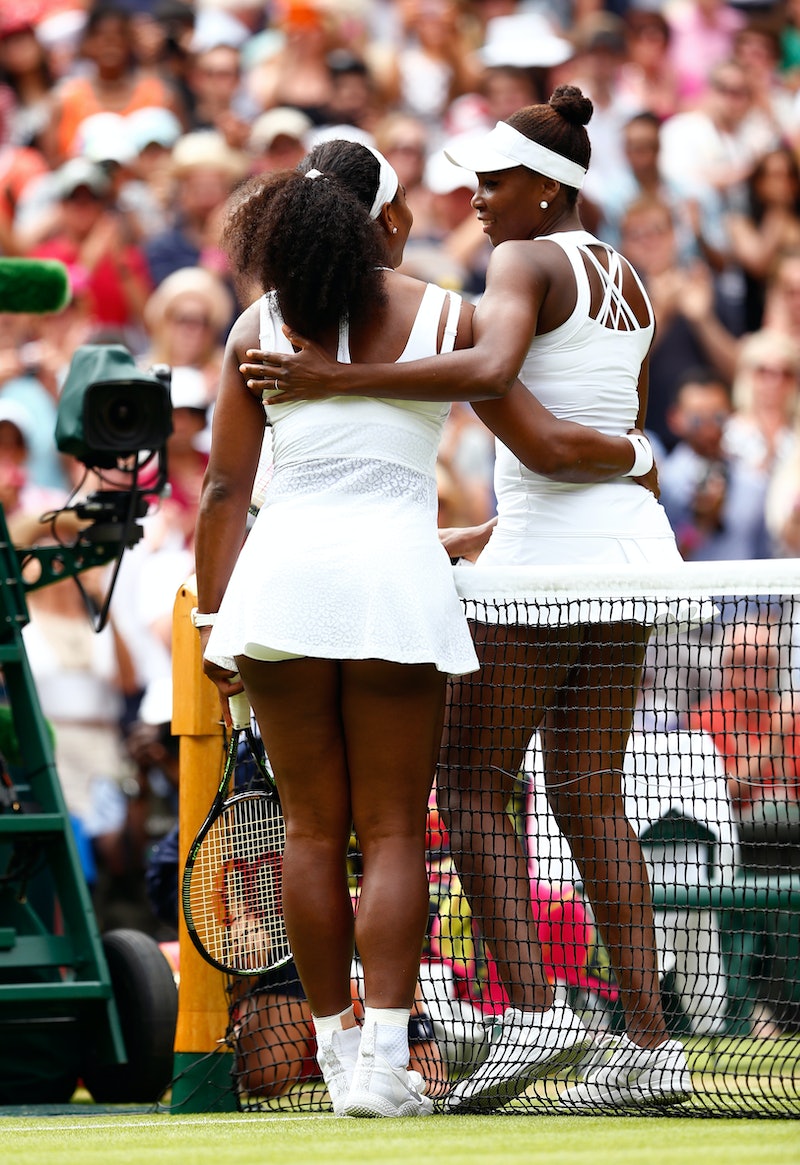 Venus and Serena Williams are both pretty amazing. From their relationship to their tennis skills, they continue to inspire people everywhere, and there are a lot of lessons women can learn from the Williams Sisters — beyond how to have a killer backhand.

Both Venus and Serena Williams are not only top-notch athletes, but they've also had long, successful careers, overcoming obstacles time and time again. They entered the tennis world as underdogs, and yet between them, they've they've won 28 Grand Slam singles titles, as well as 13 Grand Slam doubles titles as a team. They've gone from outsiders to the two most recognizable names in tennis — on either the men's or women's side of the sport.

There are so many things that people everywhere can learn from the Williams sisters, but there are some lessons that are particularly valuable to women and female athletes. Women in the sports world face a lot of challenges both on and off the court, and no matter which sport you play, there's a lot of inspiration to be found in the Williams sisters, who have been so consistently excellent for so long. Sure, none of us will probably ever manage to be on their lofty level of excellence, but that doesn't mean we can't try.

Here are eight lessons that women, and especially women athletes, can learn from Venus and Serena Williams.

Venus and Serena Williams have been playing tennis a long time. Venus had her professional debut in 1994 at age 14, and Serena followed a year later, also at just 14. Since then, they've had plenty of ups and downs. In fact, after dominating the game from around 2000 to 2004, the sisters both struggled for the next few years, plagued by various injuries and a string of losses. However, neither stopped playing, although many had speculated that their careers had peaked; in fact Serena especially soared to new heights, including her incredible Serena Slam this past season. And despite her shocking loss at the U.S. Open this year, we all know she'll be back. Williams sisters don't give up.

The Williams sisters might be best known for their dominance in singles, but they play an amazing doubles game, as well, and have been a solid team on the doubles court for years. The fact that two players who are so competitive as individuals — who, in fact, have often competed against each other — can also come together and work seamlessly with one another says a lot. It's a lesson athletes everywhere should take to heart.

Serena Williams especially has never been shy about expressing her feelings on the court. She celebrates when she makes a tough point, she gets angry when she isn't playing her best, and she has even been known to yell at the umpires when they are making calls she doesn't like. She's been reprimanded for some of her outbursts, but watching her on the court, it's also apparent that emotion fuels her game and makes her the player she is. It's also a part of who she is, and the fact that she doesn't push that down, but rather expresses it, is refreshing in a world that often tells women to be mild and agreeable. For female athletes, who pour so much of themselves into their sport, it's important to remember that it's OK to feel and to express that, however your game is going. You are under no obligation to smile politely if you don't want to.

4. Demand Everything You Deserve

Tennis is one of the few sports in which prize money for men and women is equal, and that didn't happen because the tennis community is inherently more enlightened than other sports, but because many players, especially Venus Williams, spent a long time advocating for pay equity. And they won. As well they should, because women deserve equal treatment and should never think otherwise.

The Williams sisters might be competitors, but they also consistently support one another. Neither has ever had anything but glowing things to say about the other, even when they go up against one another. They can often be found cheering for each other in the stands at tournaments. They even live together. And in a world that does its best to pit women against each other and stifle female solidarity, it's inspiring for anyone to see two women whose job is to compete against one another but still manage to be there for one another in all the ways that count.

Just because the Williams sisters love and support each other doesn't mean they don't give their matches against one another their all. So remember, no matter what obstacle you encounter or who your opponent is, you don't ever have to hold back.

7. Stand Up For What You Believe In

In 2001, the Williams sister were scheduled to play each other at the Indian Wells tournament in California when Venus had to withdraw just before the match due to injury, meaning Serena would advance. Suspicion followed that their father and coach, Richard Williams, was fixing the sisters' matches and had decided that it was Serena's "turn" to advance. When Serena eventually won the tournament, the crowd booed her. Some even used racial slurs. Both sisters understandably vowed to never return to the tournament. Serena stayed away for 14 years. Venus has still not returned. And it did not go unnoticed.

The Williams sisters chose to stand up for their beliefs and to demand that they be treated fairly. Hopefully women everywhere will also feel comfortable doing the same.

8. You Can Do Anything

Venus and Serena Williams, two girls from Compton, are not the people you'd expect to be some of the biggest names in the mostly white and wealthy world of international tennis, and yet they absolutely are. And not only that, but in many ways these two extraordinary women also revolutionized the sport. It really is one of those American Dream stories, one that lets people everywhere know that anything is possible.