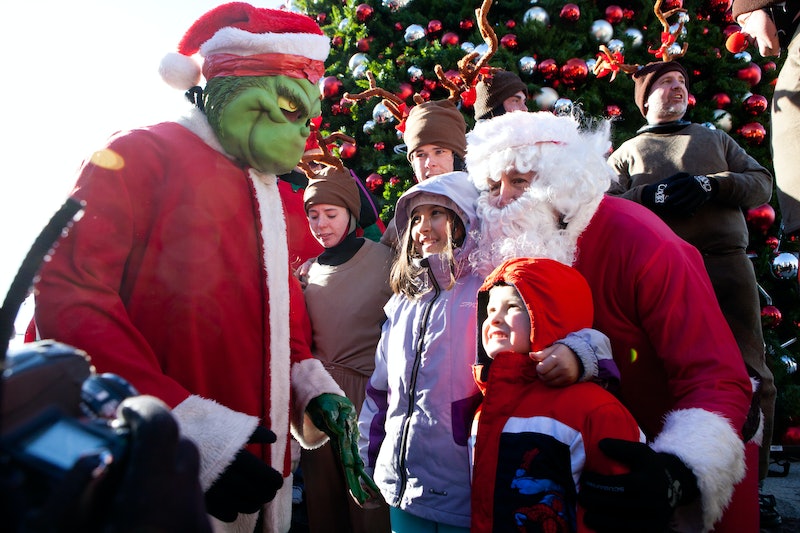 Is it time for Christmas crusaders to wave a furry white flag? According to a recent survey conducted by Public Policy Polling, only 41 percent of Americans believe there is actually a War on Christmas — a marked decrease from 47 percent last year (and a huge decrease from the 68 percent of people who thought that was a thing in 2006). Funny, because it seems like the War on Christmas has been everywhere this year.

As with every holiday season, this December has certainly seen its share of controversies, from a lady being knocked out for wishing someone "Happy Holidays," to a nationwide debate on whether Santa is white. All the while, self-appointed champion of Christmas Sarah Palin can be found on nearly every talk circuit, promoting her book Good Tidings and Great Joy: Protecting the Heart of Christmas.

So if this is a war, when did it begin? Let's take a brief look back at the history of the War on Christmas:

In a meeting on November 14, 1912, members of the Working Girls' Vacation Fund decided they'd had enough: the Working Girls were primarily Manhattan shop clerks, and didn't appreciate the expectation that they had to give extravagant gifts to their supervisors. (After all, the custom could often eat up to two week's worth of income.)

So the Working Girls banded together to form the Society for the Prevention of Useless Giving, which worked against giving gifts during the holiday season. The move was seen as more than just a little grinch-y, and the media was quick to use images of "war" and "army" to describe the women's crusade against pointless gifting. The rhetorical War on Christmas had begun.

Henry Ford, Mr. Model T himself, was known to throw the term 'War on Christmas' around — colored with some heavy anti-Semitic sentiments for good measure. A series of articles run by Ford titled The International Jew: The World's Foremost Problem stated: "Last Christmas most people had a hard time finding Christmas cards that indicated in any way that Christmas commemorated Someone's Birth." Jewish conspiracy, all the way, duh.

In 1959, the right-wing John Birch Society published a pamphlet titled "There Goes Christmas?!" which announced that "UN fanatics [had] launched their assault on Christmas in 1958, but too late to get very far before the holy day was at hand.” The purported battleground for this full-fledged attack on Christmas? U.S. department stores, where the UN was working to replace all religious decorations with universal celebrations of brotherhood.

For most of the 20th century, rhetoric about the War on Christmas remained peripheral at best. But then, 2004 happened, and Bill O'Reilly began running a recurring segment on Fox News titled "Christmas Under Siege."

The War on Christmas, O'Reilly claims, reached its apex when major corporations like Walmart told their employees to wish people "Happy Holidays" rather than a "Merry Christmas" (a move that lasted an entire year before Walmart said that they would return to using "Merry Christmas" early and often).

To worried Christians who saw a number of Americans moving away from religion, Christmas was the perfect battleground to wage cultural war. In his 2005 book The War on Christmas: How the Liberal Plot to Ban the Sacred Christian Holiday is Worse Than You Thought , political commentator (and then Fox News host) John Gibson wrote that "The Christians are coming to retake their place in the public square, and the most natural battleground in this war is Christmas.”

After ten years of worrying about Merry Christmas/Happy Holidays and decorations in stores and windows, O'Reilly had Sarah Palin on his show this year to discuss the War on Christmas (and also, moose chili). In their eyes, the battle was still alive and well — and needed to be fought.

THE RISE OF No One Caring

Unfortunately for O'Reilly and Palin, the rest of America was growing tired of the War on Christmas. In the last five years, the number of Americans who report no affiliation with religion (known as "nones") has risen from 15 percent to 20 percent of the population — and nearly one third of people under thirty report no religious affiliation at all. It's a shift that helps explain why more Americans are viewing Christmas as a cultural (rather than religious) holiday these days.

"The rise of the "nones" is very recent, really the last few years. It seems like the War on Christmas has been declining as the nones have been growing," John Brueggemann, a professor of sociology at Skidmore College who has written about the War on Christmas, told Bustle. "I think that Fox News is using this issue as a vehicle for trafficking in fear."