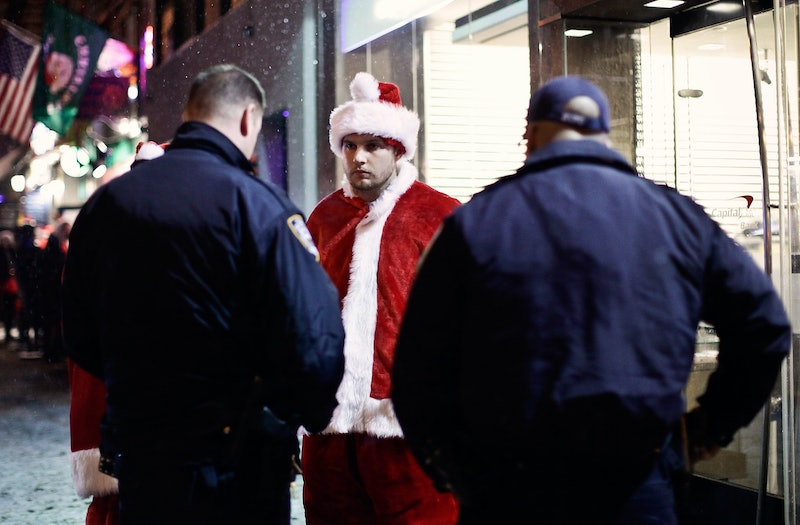 It's beginning to look a lot like Christmas controversy season. With the big day still a week away (I hope you've at least started your shopping), we've already seen a fair share of Christmas-related criticisms. Yes, Megyn Kelly, we know that you claim your words were misconstrued after you said "Santa just is white" and "Just because it makes you feel uncomfortable doesn't mean it has to change" on Fox News. And yes, NYPD, despite your most earnest efforts to ease casualties of the annual drunken bro bash Santacon, you could not stop a brawl between revelers donning red suits and elf costumes. What a pity.

But those aren't the only controversial Christmas stories this year. Let's review the weirdest stories of the holiday season — so far.

Not white? You can't dress up as Santa, says teacher

When students at New Mexico's Cleveland High School were encouraged to dress up as their choice of an elf, reindeer or Santa, ninth-grader Christopher Rougier decided to don a Santa hat and beard. But one of his teachers disagreed, allegedly saying, “Don’t you know Santa Claus is white? Why are you wearing that?” Yes, sometimes the people you entrust your children with for roughly seven hours per day are very, very dumb. Just a little factoid for you, Ms. or Mr. Teacher: ANYONE can be Santa — he is simply an expression of generosity and peace. The teacher has since been placed on paid leave for an indeterminate amount of time.

NORAD is training kids for the military, critics say

The NORAD Tracks Santa program is a super innocent way for kids and their families to "follow" Santa and he makes his way delivering presents around the globe on Christmas Eve. Right? No way, some say. At one point in a 39-second video (with truly 1990s-tastic graphics), two fighter jets can be seen on either side of Santa and his reindeer. Even though North American Aerospace Defense Command associate director Josh Golin says that jets have been flanking Santa in NORAD's tracker since the 1960s, child advocacy group Campaign for a Commercial Free Childhood is arguing that the video forces militarism into the holiday. But Golin contends, "We really do feel strongly that it's something that is safe and non-threatening, and not something that would negatively impact children. In fact, we think that it's a lot of fun." Agreed!

Kristina Vindiola was collecting donations for the Salvation Army outside of a Phoenix Walmart Monday when she received more than she bargained for. When Vindiola greeted one woman with the standard "Happy Holidays," she says the woman shot back: "‘Do you believe in God?’ And she says, ‘You’re supposed to say Merry Christmas,’ and that’s when she hit me.” After reviewing surveillance footage, police say they don't have enough evidence to prosecute the puncher. War on Christmas, indeed. Although it should be noted that most Americans don't give a hoot about holiday greetings, 42 percent prefer “Merry Christmas” to "Happy Holidays."

Christmas is the time for spending time with family, spending time giving back to a local charity — and companies spending lots and lots of money on ads to make sure you spend lots and lots of money at their stores. This season, Kmart ruffled some feathers with a Joe Boxer commercial that showed some man candy in their drawers dancing to "Jingle Bells." Well, some pearl-clutchers thought that looked more like "Jingle Balls." Kmart apologized, but has no intention of removing it.

Another commercial had the opposite effect. ESPN pulled a Christmas ad from the Cardinal Glennon Children’s Foundation after stating that it didn't meet "commercial advocacy standards." ESPN's real problem? The voiceover mentions the “birth of Jesus” and “God’s healing message.” However, the sports network quickly reversed its stance when word got out and people started to berate the decision.

A Row Over Mistletoe

Fox News — and even Time magazine — desperately wanted this story to stir up religious right-wingers by giving it the headline “Orders for Mistletoe Pour in After Oregon Girl Told She Can’t Sell Them, But Can Beg For Money at City Park” and "Christmas Controversy: The Oregon Girl Banned from Selling Mistletoe." But it's so much better than that.

Madison Root, a 11-year-old from Portland, Oregon, simply wanted to help pay for her braces. And she wanted to sell mistletoe in a public park. But when a park guard told her she couldn't because that requires a permit, her family went straight to a local TV station with the story. And like all Christmas miracles, it went viral. People from all over the country started buying mistletoe from Madison. And she seems very passionate about her newfound cause: "It’s not about the mistletoe. And it’s not about me. It’s about all of us. It’s about how we’re raising wimps, how people would rather beg for money than work hard!" Preach.

There's always some local crackpot stirring up Christmas controversy — in this case, a Texas man just decorated his house with a bloody Santa hanging on a cross. Totally not offensive at all.

More like this
The Most Powerful Photos From The Weekend’s Abortion Rights Protests
By Melanie Mignucci
Jess & Anya Are The High School Sweethearts Who Gave Love A Second Chance
By Jessica Morgan
Every Single Big & Small Way You Can Fight For Abortion Rights
By Tess Garcia
For These Abortion Clinic Volunteers, Going TikTok Viral Is A Risk Worth Taking
By Audra Heinrichs
Get Even More From Bustle — Sign Up For The Newsletter